China is facing the heaviest rainfall in a 1000 years this time which has caused many of its provinces to be flooded. Take a look at the situation and the reason for the floods in the country here.

China is facing the heaviest rains in the last 1000 years resulting in devastating floods in the country. Over the years the impact has worsened in the climate with China facing the music now.The reason that can be counted can be rapid urbanization and disruption of the atmospheric layer due to it.

Take a look at the reasons and the details of the massive floods in the atmosphere.

Breaking: Major flooding is occurring due to heavy rain in Zhengzhou, China. The city recorded the highest single-day rainfall on record. pic.twitter.com/hiEAWjYd78

China Floods: Situation in the country

The visuals that are available from China are eye watering. Many people have been trapped in flooded subways and streets of the country. Take a look at the tweet below by Xinhua News showing commuters with neck deep waters in the metro lines. 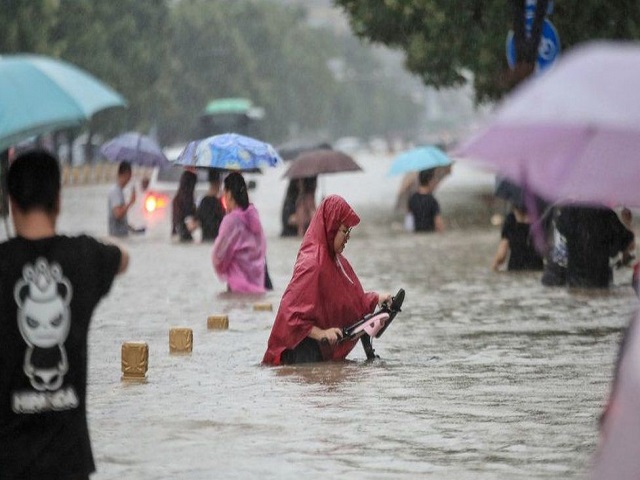 Till now 25 people including 12 subway passengers have been killed due to the heaviest rains in 1000 years. Keeping in mind the population of China, a total of 1.24 million people have been affected by the rains and flooding. The state news agencies have reported 7 missing people  and two killed due to a wall collapse in this natural emergency.

Take a look at the videos below:

150 kids and teachers of a kindergarten in Zhengzhou rescued pic.twitter.com/lKDxvvtmrI

Passengers were trapped on a metro line in Zhengzhou, China after downpours hit the city. Rescue efforts have been underway. #GLOBALink pic.twitter.com/im4nvAfhv0

The situation in China is still not controlled. There are many people who have come out in support of the Chinese and the hashtag Pray for China is being used to offer condolences to the dead.

Facing the disastrous heavy rainfall and flood in #Zhengzhou, PLA soldiers and armed police in #China stepped forward without hesitation. They are always there when they are needed. That’s why Chinese people call them “people's own army”. pic.twitter.com/U5O9QK4DKb

Meteorologists have predicted more rains in the province of Henan for the coming three days. PLA's soldiers have been thus deployed by the Chinese authorities and President Xi Jinping to come to the rescue of people.

China Floods: Reason for the massive rains and floods

China mainly depends on its dam network for controlling the floods that may have affected thousands of lives yearly. But this year everything has just collapsed be it underground subway, dams, riverbanks, buildings or lives. Almost 30 billion cubic metres of floodwater was intercepted by dams on Yangtze, mitigating flooding downstream in areas like Shanghai. On July 20th the troops were deployed to control the waters that may release due to a damaged dam in Henan. The troops blasted a dam in Henan and made embankments along with sandbags around the province.

Although China has many dams, many of them are built without considering the geographical threats they pose. Like the Three Gorges Dam built on upper Yangtze is the world's largest hydroelectric dam but is built in an area criss crossed by geological fault lines. Now that climate change is causing extreme rainfall, the weather has become even more unpredictable, relying completely on dams is not a good idea.

The province of Zhenghou has received the annual amount of rainfall it received in mere three days this time.Li Shuo, a climate change activist said that this must ring an alarm bell that Climate Change is here.

The country's rapid urbanization is also to be held responsible for this. Experts say that urbanization leads to heavy industrialization which in turn releases lots of greenhouse gases causing global warming. This can be the cause of record breaking rains in China and thus massive floods.

Also it is said that concrete coverings everywhere due to rapid urbanization leaves no place for the rain water to settle and sink which leaves no consequences but floods in the areas.

China's lakes are also drying up as there is a lot of non-porous material to stop the rainwater from collecting in them. Also there is no interlinking between the lakes and other water bodies in the country.  Zhengzhou, which has a population of 12 million, sits on the banks of the Yellow River, which is very much prone to flooding every year.

Chinese authorities had come up with the concept of sponge cities in 2014 where they targeted on replacing the concrete in the urbanized sectors with porous material like pumice, sand etc that can absorb the water that is currently flooding. It would have led to building of green pavements, buildings and areas to consume the rain water and cause lesser risk of flooding. However this is just a consolation for the damages that happen yearly in the rural areas due to flooding.

Also read| What is Monkey B Virus and how it affects humans: Complete information here