Miniature paintings are executed on a very small scale and are generally done on perishable material such as cloth, paper, leaves, etc. It is an ancient art in India and there were many schools for the same, including those of the Rajputs, Deccans and the Mughals. In this article, we are giving the definition, features and evolution of Indian Miniature painting, which is very useful for the competitive examinations like UPSC-prelims, SSC, State Services, NDA, CDS, and Railways etc. 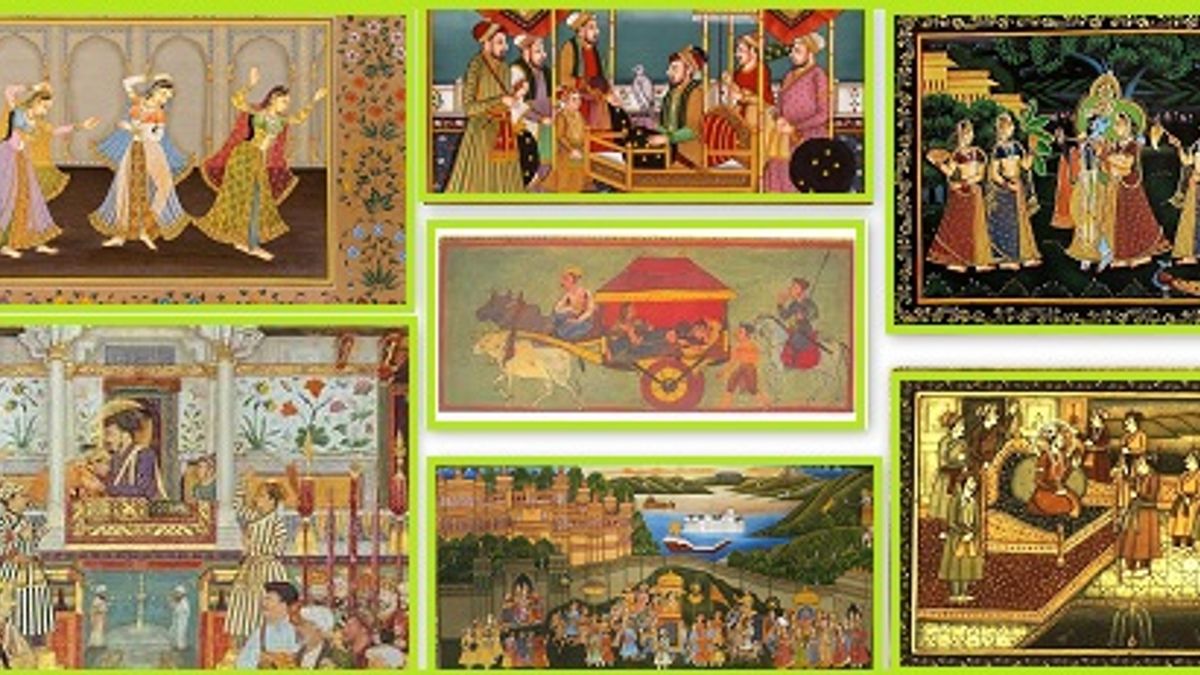 Miniature paintings are delicate handmade paintings, much smaller in size than a normal painting.  It is also called limning, small, finely wrought portrait executed on vellum, prepared card, copper, or ivory. It is an ancient art in India and there were many schools for the same, including those of the Rajputs, Deccans and the Mughals. They are also done on wooden tables, ivory panels, paper, marble, and leather, on walls and even on cloth.

1. The colours of this style of painting are handmade and made from vegetables, minerals, indigo, conch shells, precious stones, pure gold and silver.

2. Paintings of this style associated with the Ragas i.e. the melodies of Indian classical music.

3. The paintings of this style give an insight into the life of the royals and the common man, the beauty of their womenfolk and the inspirations and devotions of the artists themselves.

Evolution of Miniature Painting in India

The Bhimbetka rock shelters paintings witnesses’ prehistoric art of cave paintings which is about 30,000 years old.  These cave paintings show themes such as animals, early evidence of dance and hunting. Hence, we can say that, paintings in India can be traced back to the Neolithic age. Then after, human evolve their style of paintings which can be seen in Ajanta Cave Painting (2nd Century BC to 5th Century AD); Bagh Caves in Madhya Pradesh.

The actual, miniature painting started taking form in the Western Indian Himalayas during 17th century AD. These paintings were very much influenced by the mural paintings that originated during the latter half of the 8th century. Initially they were done on Palm leaves and later the work was done on paper.

The paintings give an insight into the life of the royals and the common man, the beauty of their womenfolk and the inspirations and devotions of the artists themselves. Music is associated with paintings here The different ragas were considered appropriate to different seasons such as Bhairava, Malava, Sri-Raga, Hindola or vasanta, Dipaka and Megha.

With the advent of Mughal, the Indian miniature paintings shifted to the portraits and richness of colour effects with the unique Persian flavour. During this period, the art specialises in Court and Palace scenes. The concept of illustrated palm leaf manuscripts came into being during the 11th and 12th centuries.

The Indian Miniature painting was at the zenith point during the period of Mughal Emperor Shah Jahan because he was a great patron of miniature painting. But after his regime, paintings lost their charm and started to decline in the 18th century. It became a cheap medium to depict the scenes of dance, parties and sensuous palace life. This is because the successor of Shah Jahan focussed more on architectural grandeur and though the paintings during were further refined from the earlier periods, it was still not the focus.