Gir National Park (Gujarat) is the only place in the world where lions are found roaming in the forest. The Government had notified the large area of Sasan Gir as a wildlife sanctuary on 18th September 1965 in order to conserve the Asiatic Lion. To read more related articles, click on the link given below,

Bandhavgarh National Park: The land of National Animal of India

• Gir National Park & Wildlife Sanctuary is the last shelter to the surviving population of the Asiatic Lion in the wild.

• The Government declared a big extent of Sasan Gir as a wildlife sanctuary on 18th September 1965 in order to conserve the Asiatic Lion.

• Sasan Gir as wildlife sanctuary scattered in an area of 1412 square kilometers out of which 258 Km covers the core area of the National Park.

• Most of the area of the park is rugged hills, with high ridges and densely forested valleys, wide grassland plateaus, and isolated hilltops.

• The forest area of Gir was the hunting grounds of the Nawabs of Junagadh. But when the population of lions declined drastically then Nawab Sir Muhammad Rasul Khanji Babi declared Gir as a "protected" area in 1900.

• Gir has about 674 lions and 300 leopards, making it as one of the major 'big cat' concentrations in India. 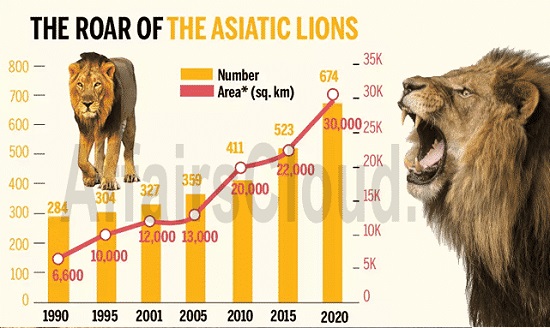 • Blackbucks from the surrounding area are sometimes seen in the sanctuary.

• Gir has a large population of marsh crocodiles, which is among the 40 species of reptiles and amphibians recorded in the sanctuary.

• The park checklist has over 250 species of birds. Rare species such as Lesser Florican and the Sarus Crane are recorded in the grasslands along the periphery of the sanctuary.

National Park attracts large number of tourists to witness the Asiatic lion, as this is the sole place all across the world where these creatures are presently found. Once extinct, numbers have recovered owing to the conservation efforts. The Sanctuary is open for tourism from 16th October to 15th June every year.

Junagadh is perhaps the best approach to the park. The railway station in Junagadh receives trains from different cities like Ahmedabad and Rajkot and other major cities. Then, from here it takes approximately one and a half hour to reach Gir National Park.