The 19th century India witnesses the birth of new vision- a modern vision among some enlightened sections of the Indian society. This enlightened vision was to shape the course of events for decades to come and even beyond. In this article we are giving, 11 GK Questions and Answers on the Socio-Religious Reforms Movement in India with an explanation which will be helpful for the aspirants of the competitive exams like UPSC/PCS/SSC/CDS etc. 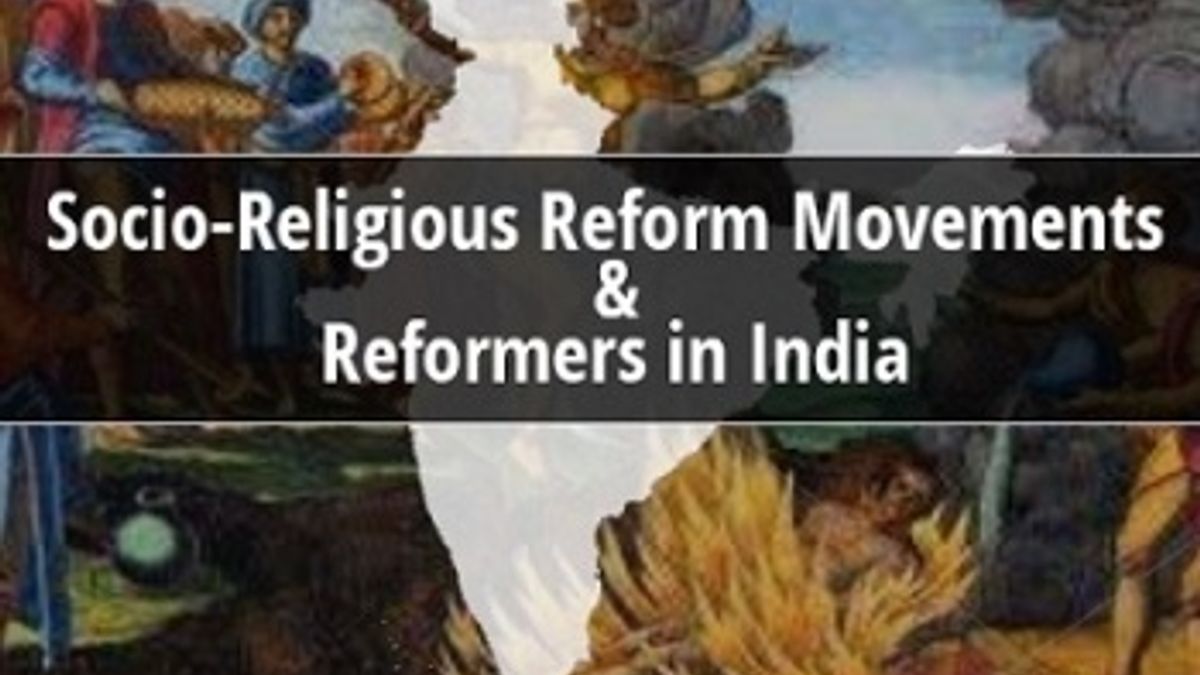 As the Reform movements at that time related with some religious beliefs therefore most of the movements of social reform were of a religious character. Socio-religious reform movements arose in most of the communities of Indian people. They not only attacked the bigotry but also superstition and the hold of the priestly class.

1. Which of the following is not correctly matched?

Explanation: The correct match is given below-

Hence, D is not correctly matched.

2. Who among the following established the Tattvabodhini Sabha in 1839 at Calcutta (Now Kolkata)?

Explanation: Debendranath Tagore established the Tattvabodhini Sabha (1839) at Calcutta to propagate Rammohan Roy’s ideas. Hence, B is the correct option.

3. Which of the following is associated with the Young Bengal Movement?

Explanation: The movement started by Derozio was called the Young Bengal Movement and his followers were known as the Derozians. They condemned religious rites and the rituals, and pleaded for eradication of social evils, female education and improvement in the condition of women. Hence, A is the correct option.

4. Who among the following was popularly known as ‘Lokahitawadi'?

Explanation: Gopal Hari Deshmukh was popularly known as ‘Lokahitawadi’. He made powerful rationalist attacks on Hindu orthodoxy and preached religious and social equality. Hence, C is the correct option.

5. Who among the following establishes the Mukti Mission in Pune?

Explanation: In 1889, Pandita Ramabai established the Mukti Mission, in Pune, a refuge for young widows who had been deserted and abused by their families. She also started Sharda Sadan which provided housing, education, vocational training and medical services to widows, orphans and the visually challenged. Hence, A is the correct option.

GK Questions and Answers on the History of Press in India

6. Which of the following statement(s) is/are correct with the reference of Singh Sabha Movement?

A. It aimed for modern Western education for Sikhs

B. It was formed to counter proselytising activities in Sikhs by Hindu revivalists

C. The Akali Movements was an off-shoot of this movement

Explanation: The Singh Sabha Movement was a Sikh movement that began in Punjab in the 1870s in reaction to the proselytising activities of Christians, Brahmo Samajis, Arya Samaj, Muslim Aligarh movement and Ahmadiyah. This movement was organised in an era when Sikh Empire had been dissolved and annexed by the colonial British, Khalsa had lost its prestige, and mainstream Sikhs were rapidly converting to other religions. The movement's aims were, according to Barrier and Singh, to "propagate the true Sikh religion and restore Sikhism to its pristine glory; to write and distribute historical and religious books of Sikhs; to propagate Gurmukhi Punjabi through magazines and media". It was helped by the missionaries’ activities of Mohammadens and Christians. It grew out of nowhere to become a founding father of current SGPC and Akali party. Hence, D is the correct option.

7. Which of the following is correctly paired?

Explanation: The Hindu Succession Act, 1956 is an Act of the Parliament of India enacted to amend and codify the law relating to intestate or unwilled succession, among Hindus, Buddhists, Jains, and Sikhs. The Act lays down a uniform and comprehensive system of inheritance and succession into one Act. Hence, D is the correct option.

GK Questions and Answers on the revolutionary movements during British India

Explanation: The Western-educated progressive Parsis like Dadabhai Naoroji, J.B. Wacha, S.S. Bangali and Naoroji Furdonji founded the Rahanumai Mazdayasanan Sabha (Religious Reform Association) in 1851. The prime objective of the association was- “the regeneration of the social condition of the Parsis and the restoration of the Zoroastrian religion to its pristine purity”. Rast Goftar (Voice of Truth) was its weekly organ. Hence, B is the correct option.

9. Who among the following founded the Nirankari Movement?

Explanation: Baba Dayal Das founded the Nirankari Movement. He insisted the worship of God as Nirankar (formless). Hence, A is the correct option.

10. Who among the following founded the Namdhari Movement?

Explanation: The Namdhari Movement was founded by Baba Ram Singh. His followers wore white clothes and gave up meat eating. Hence, B is the correct option.