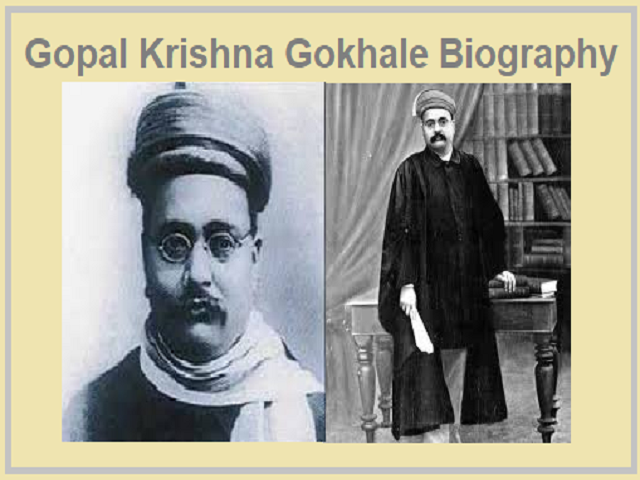 Gopal Krishna Gokhale was one of the wisest moderate leaders of the Indian National Congress. He propagated the idea of self-rule in India and became the voice of Indians who wanted freedom from British rule. He was the founder of the Servants of Indian Society to inspire nationalists. He stressed the need for social reform. He led the moderate faction and favours the reforms by working and co-operating with the existing government institutions and machinery.

He was born on 9 May, 1866 in a Chitapavan Brahmin family in Ratnagiri District, Bombay Presidency (now Maharashtra). He received his early education at Rajaram High School in Kolhapur and moved to Bombay for higher education. At the age of 18, he had completed his graduation from Elphinstone College in Bombay. In college, he understood the importance of a Parliamentary system of government and democracy. After completing his bachelor's degree, he joined the Deccan Education Society. His mentor was Mahadev Govind Ranade who was a renowned scholar and jurist, in Poona. He started working in Poona Sarvajanik Sabha with Ranade and later he became the Secretary. It was the leading political organisation in Bombay. At Fergusson College, he became the professor and secretary of Deccan Education Society in 1891. He did not face any difficulty in communicating with the Britishers because of his clear knowledge of English.

In the Imperial Legislative Council, he gained knowledge and mastery of all relevant details on pending legislation and shortly became the foremost distinguished member of the Council. He was also a noted face by his impressive participation in the annual debate upon the budget.

The Gopal Krishna Gokhale was at the apex of his career by the year 1905. In 1905, he was elected the President of the Indian National Congress. He established the 'Servants of India Society" in 1905 with the aim of providing training to the people to devote themselves within the service of India as national missionaries. Also, to promote all the constitutional means the national interests of the Indian people.

He founded the 'Ranade Institute of Economics' in 1908. He was against the caste system and untouchability. He pleaded for the emancipation of women and work for the cause of female education. He was also instrumental in the formation of the Minto-Morley Reforms of 1909 which eventually enacted into law. But, it did not give a democratic system to the people.  Gopal Krishna Gokhale visited South Africa in 1912, where he met Mohandas Karamchand Gandhi to discuss Gandhi's campaign for rights for Indians. He also met Gen. Jan Smuts to assist in securing a satisfactory agreement regarding the position of Indians. No doubt Gopal Krishna Gokhale did immense service to the cause of India. He died on 19 February, 1915.

- Gopal Krishna Gokhale: A Centenary Tribute (1966), published by the Maharashtra Information Centre – Is an interesting collection of articles on Gokhale.

- Stanley A. Wolpert, Tilak and Gokhale: A Revolution and Reform in the Making of Modern India (1962).

Gokhale views were shaped through education, extensive reading and inspiration from his mentor Govind Ranade. He always addressed the issues including social, economic, and political reforms and balances them with the culture of the country. He was a moderate leader and initially was eager to work with the government on various social issues. He advocates liberalism and the importance of education in society. To several leaders of the Indian National Movement, he became an inspiration including Mahatma Gandhi.