The Human Freedom Index (HFI) is a global ranking of civil, economic and personal freedom of a nation. The HFI 2020 used 34 personal freedom variables and covered 162 countries, representing around 94% of the world's population.

On 17 December 2020, the Human Freedom Index (HFI), a global ranking of civil, economic and personal freedom, released its report. The HFI 2020 used 34 personal freedom variables and covered 162 countries for the year 2018 (the most recent year for which sufficient data was available), representing around 94% of the world's population. In this article, we have provided a list of 162 countries along with their Human Freedom Scores and Ranks.

Human Freedom Index 2020 is the sixth annual report by the Cato Institute in the United States and Fraser Institute in Canada. 76 indicators of personal, civil, and economic freedoms were taken into consideration before ranking 162 countries from 2008 to 2018.

The countries were rated on a scale of 0 to 10, where 10 represents more freedom.

1- The Economic Freedom subindex comprises half of the weightage in the overall index.

2- The Personal Freedom subindex comprises remaining half of the weightage in the overall index.

The report suggested an unequal distribution of freedom in the world, with only 15% population of the world's population living in the top quartile while 34% in the bottom quartile in the Human Freedom Index 2020. The report also highlighted that the gap in human freedom between the top and bottom countries has widened since 2008. 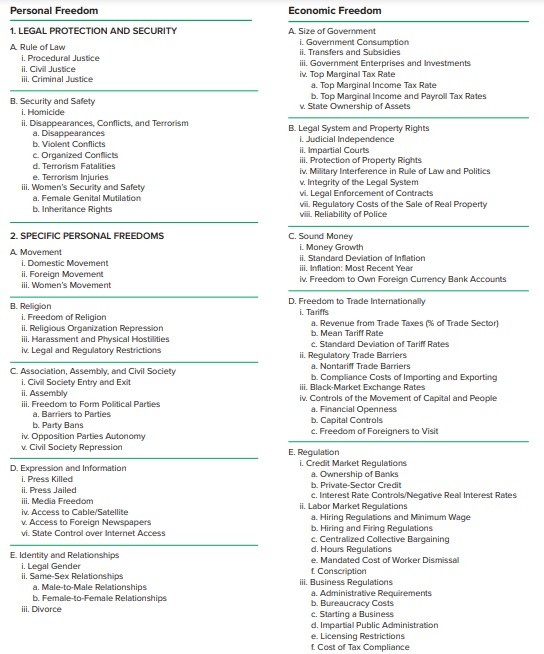 Human Freedom Index 2020: Ratings and Rankings of the Countries

As per James Gwartney, Robert Lawson, and Walter Block: “Individuals have economic freedom when the property they acquire without the use of force, fraud, or theft is protected from physical invasions by others and they are free to use, exchange, or give their property as long as their actions do not violate the identical rights of others.”

As per a report by Freedom House on Freedom on the Net 2020, India has ranked at 51st position. The report also labelled India’s internet as 'partly free'.

As per a report by Fraser Institute, Canada on Global Economic Freedom Index 2020, India has ranked at 105th position. The report was released in September 2020.

As per a report by Reporters Without Borders (RSF), India ranked at 142nd position out of 180 countries/territories. The report was released in April 2020.

Human Freedom Index 2020 is a report on the global ranking of civil, economic and personal freedom of a nation. The HFI 2020 used 34 personal freedom variables and covered 162 countries, representing around 94% of the world's population.

Which is the freest country in the world?

As per the Human Freedom Index 2020, New Zealand ranked at number one with the highest human freedom score-- 8.87 out of 10.

Which countries are the freest?

What is India's rank in the Human Freedom Index 2020?