World Alzheimer's Day 2021: The day is commemorated annually on September 21 to spread awareness and educate people about Alzheimer's disease and dementia. In some countries, it is observed the whole month. Alzheimer’s is a progressive brain disorder that slowly destroys memory and thinking skills etc. In older adults, it is the most common cause of dementia. Or we can say that it is a progressive disease that causes brain cells to degenerate and die.

Do you know that Alzheimer's is the most common cause of Dementia? According to some researchers, this disorder may rank third just behind heart disease and cancer, as a cause of death for older people. Most people with the disease are diagnosed after age 65. It is said that Alzheimer's disease accounts for 60 percent to 80 percent of dementia cases.

Therefore, we can say that Alzheimer's is a neurodegenerative and progressive disease that slowly destroys memory and other functions related to memory. It happens when plagues containing beta-amyloid form in the brain.

A person suffering from this disease is not able to think properly and the ability to carry out the simplest tasks destroys. With time, symptoms of Alzheimer’s become worsen; it becomes difficult for a person to remember recent events, to reason, and even to recognize people they know.

It is the common cause of dementia which is a group of brain disorders that cause the loss of intellectual and social skills. Let us study from the article about Alzheimer’s disease.

The theme of World Alzheimer's Day 2020 was 'Let's talk about dementia'.  to raise awareness, educate, encourage support and demystify dementia.

1. Alzheimer's disease is named after Dr. Alois Alzheimer. He had noticed some changes in the brain tissue of a woman who had died of an unusual mental illness. It also occurs with other diseases.

2. According to a Ph.D. faculty Timothy Hohman at Vanderbilt University's Memory and Alzheimer's Center in Nashville Tennessee says that people who develop Alzheimer's disease have cardiovascular disease as well.

3. Alzheimer's disease is not just memory loss in fact decreasing memory is a major symptom of the disease. It is also caused by the build-up of proteins known as tangles or plaques within the brain and is also known as the third type of diabetes.

4. Due to this Alzheimer's disease brain cells decay and affect different kinds of cognitive functions like memory loss, language problems, and unpredictable behaviour.

5. The greatest risk factor for Alzheimer's disease is increasing age. It is not a part of normal aging, but your risk increases greatly after you reach 65. Sometimes symptoms may occur at the age of 30s or so because of rare genetic changes in the people i.e. genes are beyond our control and inherited a version of the apolipoprotein gene known as ApoE (one of three forms of a gene) and so is the beginning of early-onset Alzheimer's.

6. Alzheimer’s is an incurable disease as the death of brain cells cannot be reversed. By reducing the risk of heart disease you can lower the risk of this disease. Important factors that to be controlled are high blood pressure, high blood cholesterol, excess weight, and diabetes. 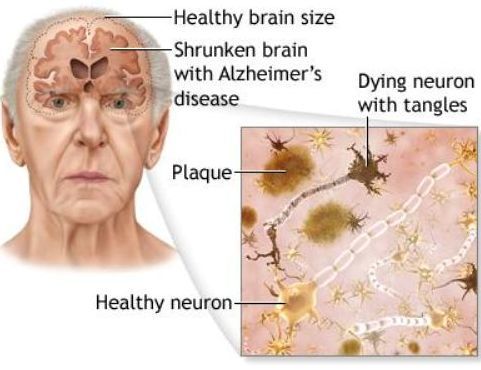 8. Alzheimer's is a progressive disease and so it worsens over time. In its early stages, memoryless is mild but with late-stage, a person may lose the ability to carry on a conversation and respond to their environment.

Therefore, we can say that Alzheimer's disease is a neurological disorder in which cells of the brain died which leads to loss of memory, a problem with words in speaking or writing, poor judgement, changes in mood and personality, confusion with time or place, etc. At the first stage, these symptoms are mild but they become more severe with time. Alzheimer's disease is the most common type of dementia.