India and Myanmar agreed to work towards the operationalization of Strategic Sittwe Port in the first quarter of 2021.

1- Amid the unprecedented pandemic, the Indian delegation presented a package of 3,000 vials of the antiviral Remdesivir to help Myanmar in its fight against COVID-19.

2- Mayanmar has been prioritised by India in sharing the vaccines for COVID-19, whenever available.

3- The operationalization of Sittwe Port in the first quarter of 2021 is promised. This will connect India's Kolkata to Sittwe in Myanmar and Myanmar's Kaladan river to India's north-east region.

4- Both the countries stressed over the security of their border areas and agreed to maintain peace and stability. This is because India is concerned over some militant groups which are active in the North-East region and are taking shelter in Myanmar. In May 2020, Myanmar handed over 22 cadres of Indian insurgent groups to India.

5- India announced a grant of $2 Million for the construction of the border haat bridge at Byanyu/Sarsichauk in Chin State. This strategic haat will enhance economic activity between Mizoram and Myanmar.

6- The Rohingya issues were also taken into consideration with Indian delegation ensuring the safe, sustainable and speedy return of Rohingya refugees from refugees camps of Bangladesh. 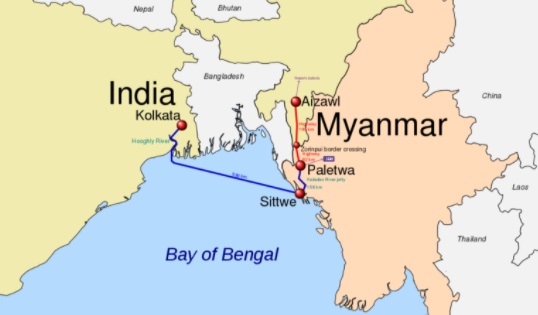 1- The port is situated at the mouth of Kaladan river and is financed by India as a part the Kaladan Multi-Modal Transit Transport Project, which is a collaboration between India and Myanmar.

2- It is a deep underwater port on the Bay of Bengal and will enhance the transport infrastructure between southwestern Myanmar and north-eastern India.

3- After its operationalization, the goods can be transported from Kolkata to Sittwe port and then to Mizoram.

4- The Kaladan Project will provide an alternative route to North-East India with the rest of the country. Currently, the narrow Siliguri Corridor provides access to the seven North-East states of India.

5- With the operationalization of this alternative route, the transportation delays and cost overheads will be reduced significantly.

1- In 2010, India started working on a mega infrastructural project in Myanmar. The aim was to construct an integrated port and waterway transport terminal at Sittwe.

3- The project reduced the distance between Kolkata to Sittwe by around 1,328 km.

4- It also reduced the need to transport goods via narrow Siliguri corridor.

5- An agreement was signed between India and Myanmar for the operationalization of the port in October 2018. However, promised operationalization was hindered due to the conflict between the Myanmar military and the insurgent group Arakan Army.

7- In 2019, the insurgent group Arakan Army targetted the Kaladan project by abducting officials and Indian workers. This resulted in a coordinated operation by Indian and Myanmar military to avert alleged threats from the insurgent group against the project.

1- Bangladesh has been pushing for early repatriation of the hundreds of thousands of Rohingyas. Thus, Indian delegation took this into consideration and assured safe,  sustainable and speedy return of Rohingya refugees from refugees camps of Bangladesh.

2- India has laid emphasis on the socio-economic development of the Rakhine province to create enough economic incentive for refugees who will return from the camps.

3- In December 2017, India and Myanmar signed an MoU (Memorandum of Understanding) on the Rakhine State Development Programme. This provided an annual grant in aid of $ 5 million.

4- Both the countries noted significant progress under the Rakhine State Development Programme (RSDP) and India has proposed to finalise the projects pending under phase-III of the programme. This includes setting up a skills training centre, up-gradation of agricultural mechanisation, etc.

India building a new road between Ladakh and Darcha: All you need to know about the strategically important road for India

What is the strategical importance of Kosi Mahasetu Bridge?

What is the Kaladan Multi-modal Project?

Kaladan Multi-modal Project connects the eastern Indian seaport of Kolkata with Sittwe seaport in Rakhine State, Myanmar by sea. It reduced the distance between Kolkata to Sittwe by around 1,328 km. The project was completed in 2018 at a cost of Rs. 517.29 crores.

What is Siliguri Corridor?

It is a narrow stretch of 22 km in West Bengal, connecting northeastern states of India to the rest of the country. It is also known as Chicken's neck.

What is the strategic importance of Sittwe Port?

Sittwe Port is situated at the mouth of Kaladan river and is financed by India as a part the Kaladan Multi-Modal Transit Transport Project. It will provide an alternative route to access North-East India with the rest of the country, apart from the narrow Siliguri Corridor.

Why is Myanmar important to India?

Myanmar is the only ASEAN country that shares a border with India, hence, is strategically important to India.
Get the latest General Knowledge and Current Affairs from all over India and world for all competitive exams.