List of important Chemical Processes
1. Bessemer Process: Is a method of converting pig iron to steel by blowing air through the molten metals to oxidize impurities such as carbon, silicon, phosphorus and manganese normally present in pig iron.
2. Clemmensen Reduction:  Is a process used to convert aldehydes and ketones to the corresponding hydrocarbons by heating with amalgamated zinc and hydrochloric acid.
3. Gattermann Reaction: Is a process used to convert an aromatic amine in to the corresponding halogen derivative through diazonium salt formation using copper as a catalyst.
4. Haber Process: An industrial process of producing ammonia by the reaction of nitrogen with hydrogen in the presence of the catalyst.

Do you know why Oil and Water does not mix together?
5. Kolbe Raection: Is used for the preparation of saturated or unsaturated hydrocarbons by the electrolysis of solutions of the alkalis salts of aliphatic carboxylic acids.
6. Solvay Process: Is a process of snaking sodium carbonate from calcium carbonate and sodium chloride in large scale. The process involves heating of calcium carbonate to give calcium oxide and carbon dioxide which is bubbled into a solution of sodium chloride in ammonia. Sodium hydrogen carbonate is precipitated which on heating gives sodium carbonate.
7. Bayer Process: A process used to extract aluminium oxide Al2O3 or alumina by treating powdered bauxite with hot caustic soda solution under pressure. The process was developed by German chemist, Karl Joseph Bayer in 1888.
8. Bergius Process: A process for making lubricants and synthetic fuel e.g. petrol from coal by heating a mixture of powdered coal and heavy oil or tar with hydrogen under pressure in the presence of a catalyst  (iron, tin or lead). The process was developed by German chemist, Friedrich Bergius, who shared the 1931 Nobel Prize. 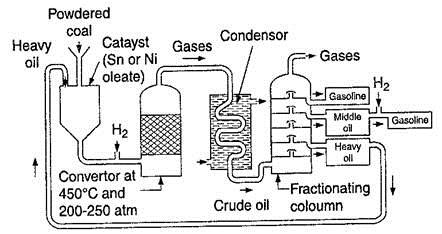 Source: www.book.transtutors.com
9. Bosch Process: A process used to make industrial hydrogen by passing steam over white-hot coke to produce water gas ( a mixture of carbon monoxide and hydrogen) which in the presence of a catalyst ( a metal oxide) reacts with more steam to liberate hydrogen and carbon dioxide. The process is named after the German Chemist, Carl Bosch (1874-1940).
10. Down Process: Is a process of making sodium metal by electrolysis of molten sodium chloride. The molten sodium and calcium formed at the cathode are separated.
11. Frasch Process: Is used to extract sulphur from subterranean deposits in which superheated water is forced down the deposits which melts the sulphur under the ground. Molten sulphur is collected by forcing compressed air from another side. The process was developed by German chemist, Herman Frasch in 1891.
12. Hall-Heroult Process (Hall-Heroult): A process used to prepare aluminium by electrolysis in which alumina (aluminium oxide) is dissolved in cryolite (sodium aluminium fluoride) and electrolyzed. It was developed in 1885 in USA by Charles Hall and in France by P.T.Heroult.
13. Parkes Process:  A process used for extraction of silver traces from lead ore galena. Molten zinc is added to molten galena and lead is separated leaving zinc-silver which on heating distils off zinc freeing the silver.
From this article we come to know about the various chemical processes occurs in chemical industry.