Rajya Sabha passed the Major Port Authorities Bill 2020 on 10 February 2020 that now requires the assent of the President of India to become an Act. It will replace the Major Port Trusts Act of 1963. 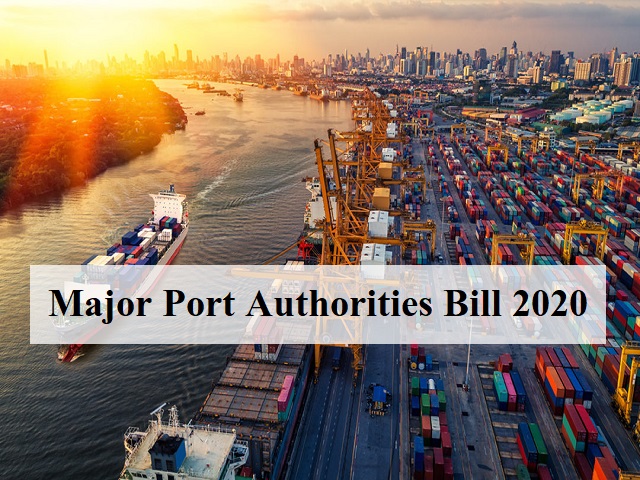 In a bid to promote the expansion of port infrastructure and facilitate trade and commerce, Rajya Sabha passed the Major Port Authorities Bill 2020 on 10 February 2020. The aforementioned Bill now requires the assent of the President of India to become an Act. It is to be noted that 84 members voted in favour of the Bill while 44 members voted against Bill.

On 12 March 2020, Minister of State for Shipping Mansukh Mandaviya introduced the Bill in Lok Sabha. The Bill will replace the Major Port Trusts Act of 1963.

As per Union Shipping Minister Mansukh Mandaviya, the Bill will make the major ports in the country more autonomous and provide major thrust in the maritime sector. It will help the ports to develop world-class infrastructure and will also enhance transparency in their functioning.

In 2016, the Bill was introduced in Lok Sabha and was referred to the  Parliamentary Standing Committee (PSC). The Parliamentary Standing Committee (PSC) after consultations submitted its report on the Bill in July 2017. Based on these recommendations, an official amendment to the Bill was introduced in the Lok Sabha in 2018 but was lapsed after the dissolution of the previous Lok Sabha.

GNCTD Act 1991: What is the Government of National Capital Territory of Delhi Act, 1991?

Significance of the Bill

1- The Major Port Authorities Bill 2020 seeks to empower the major ports of the country so that they can perform with greater efficiency on account of full autonomy in decision making and by modernizing the institutional framework of major ports.

2- The Bill will also impart faster and transparent decision making to benefit the stakeholders and better project execution capability.

3- The aforementioned Bill will also reorient the governance model in central ports to the landlord port model.

The features of the Major Port Authorities Bill 2020 are as follows:

1- Application of the Bill: The Bill will be applicable to all the major ports of India.

2- Number of Sections: The number of sections in the Bill have been reduced to 76 from earlier 134 by eliminating overlapping and obsolete Sections.

The Board will consist of professional independent members which in turn will strengthen decision making and strategic planning. Provisions have also been made in the Bill for the inclusion of representatives of State Government in the Board of Major Port Authority where the major port is located. The Board will have Members from the Ministry of Railways, the Ministry of Defence and Customs, the Department of Revenue, a Government Nominee Member and a Member representing the employees of the Major Port Authority.

4- Powers of the Board: As per the Bill, the Board can use the property, assets and funds for the development of the major port.

The Board has been delegated the power to make rules on (a) declaring availability of port assets for port-related activities and services (b) developing infrastructure facilities such as setting up new ports, jetties (c) providing exemption or remission from payment of any charges on any goods or vessels.

The Board may raise loans from any (a) scheduled bank or financial institution within India (b) any financial institution outside India that is compliant with all the laws. It is to be noted that for loans above 50% of its capital reserves, the Board has to seek the prior sanction of the Central Government.

5- Fixing of Tariffs: The Tariff Authority for Major Ports (TAMP) has now been provided powers to fix tariff which will act as a reference tariff for purposes of bidding for PPP projects. Further, the PPP operators will be free to fix tariff based on market conditions.

The Bill also provides for the committee, appointed by the Board to determine the rates for (a) services that will be performed at ports (b) the access to and usage of the port assets (c) different classes of goods and vessels, and so on.

6- Adjudicatory Board: Constitution of an Adjudicatory Board has been proposed to carry out the residual function of the erstwhile TAMP for major ports, to look into disputes between ports and PPP concessionaires, to review stressed PPP projects and suggest measures to revive such projects and to look into complaints regarding services rendered by the ports/ private operators operating within the ports.

The Board will consist of a Presiding Officer and two members (to be appointed by the Central Government). The Adjudicatory Board will: (a) carry out certain functions that were being carried out by the TAMP (b) adjudicate on the disputes/ claims related to rights and obligations of the major ports and PPP concessionaires (c) review stressed PPP projects.

8- Penalties: If the provisions of the Bill is contravened by a person, he shall be liable with a fine of up to one lakh rupees.

What is the Special Marriage Act of 1954?