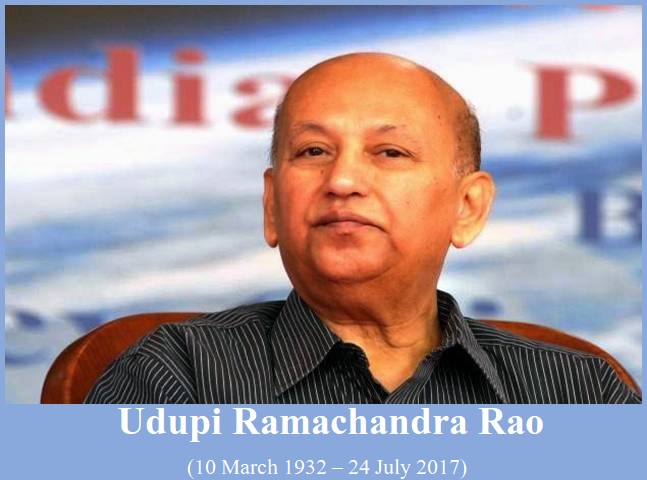 To commemorate the 89th birth anniversary of the former Chairman of the Indian Space Research Organisation (ISRO) Udupi Ramachandra Rao, Google Doodle featured his sketch with a background of Earth and stars. The description says, "Your stellar technological advancements continue to be felt across the galaxy". He was also the Chairman of the Governing Council of the Physical Research Laboratory at Ahmedabad and Nehru Planetarium at Bengaluru and of the Indian Institute for Space Science and Technology (IIST) at Thiruvananthapuram.

He completed his secondary education at Christian High School, Udupi. He moved to Andhra Pradesh for further studies and did B.Sc. from Government Arts and Science College, Anantpur. He then moved to Uttar Pradesh to complete M.Sc. from Banaras Hindu University. For his Ph.D., he moved to Gujarat and completed it from Physical Research Laboratory, Ahmedabad under the guidance of Dr. Vikram Sarabhai.

He started his career as a cosmic ray scientist and worked under Dr. Vikram Sarabhai. U.R. Rao was the first to establish the continuous nature of the solar wind and its effect on geomagnetism by using Mariner 2 observations in association with the Jet Propulsion Laboratory group. His numerous experiments led to a complete understanding of the solar cosmic-ray phenomena and the electromagnetic state of the interplanetary space.

In 1972, Udupi Ramachandra Rao took the responsibility for the establishment of satellite technology in India. In the year 1975, beginning with the first Indian satellite, Aryabhata, over 18 satellites including Bhaskara, APPLE, Rohini, INSAT-1 and INSAT-2 series of multipurpose satellites and  IRS-1A and IRS-1B remote sensing satellites were designed, fabricated and launched under his guidance to provide communication, remote sensing, and meteorological services.

Rao after working as a Faculty Member at MIT and Assistant Professor at the University of Texas at Dallas returned to India in 1966 as a Professor at the Physical Research Laboratory, Ahmedabad.

During his stint at ISRO, he successfully launched the INSAT series of satellites, giving a thrust to communications in India. This led to the expansion of telecommunication links to remotest areas of India, allowing people to communicate easily through Subscriber Trunk Dialing, popular by its acronym STD. This played a major role in developing India as an IT hub.

He had published more than 350 scientific and technical papers in various national and international journals covering a wide range of topics such as cosmic rays, high energy astronomy, space applications and more.

Udupi Ramachandra Rao has published many books including Physics of the Communication, Space and Agenda 21 - Caring for the Planet Earth and Space Technology for Sustainable Development.

He passed away at his residence in Bengaluru, India at around 3 a.m., after prolonged illness and age-related health issues on 24 July 2017 at the age of 85.