Ugliest Language in India Controversy: Google removed the search result after outrage and issued an apology

If you Google search the ugliest language in India, the search result displays: The answer is Kannada, a language spoken by around 40 million people in south India. The Karnataka State Government has decided to take legal action against the tech giant, Google, over the ugliest language in India controversy. After facing severe backlash, Google has removed the search result and issued an apology.

In a response to the aforementioned controversy, Google issued an apology which stated, "Search isn’t always perfect. Sometimes, the way content is described on the Internet can yield surprising results to specific queries. We know this is not ideal, but we take swift corrective action when we are made aware of an issue and are continually working to improve our algorithms. Naturally, these are not reflective of the opinions of Google, and we apologize for the misunderstanding and hurting any sentiments." 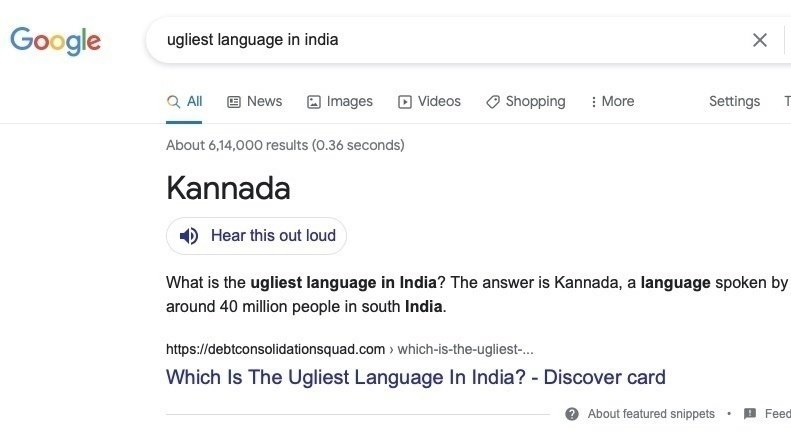 Following this, there's an outrage on social media. People are demanding that Google must apologize and take strict action against it. The language is spoken by 60 million people and is one of the oldest languages in the world.

Thincnext, an IT company based in Bangalore, has started a petition on change.org to remove the search result from Google. So far, 2,271 people have signed it (at the time of writing this article).

President AAP Youth Wing, Karnataka, Mukund Gowda, shared a letter on Facebook which he wrote to Google India Vice President Sanjay Gupta. He wrote, "I take a serious exception to the search results shown by Google when someone searches for 'Ugliest Languages in India'. Unfortunately, 'Kannada' is the answer which comes up on the screen."

He further wrote, "While there is no Ugly Language in India, Google should have been sensitive to even show any result for this search. I believe this is the result gathered based on inputs and user experience that is logged as answered by some anti-Kannada users of Google."

He requested Sanjay Singh, Google India VP to immediately take down the search result and trace people who are playing with the sentiments of Kannadigas.

President of Kannada Development Authority TS Nagabharana was quoted by TV9Kannada as saying, "We have got into the legal battle over this issue. Legal notice sent to Google condemning Kannada. The humiliation of one another in terms of ground, water, language and culture cannot be tolerated. Clearly, this is some kind of systematic conspiracy. Kannadigas, the moods of the Kannada language, are ambushed to create such an opportunity. It is not our job to resist. Instead, these types of events must be kept in check."

Why Google showed Kannada as the Ugliest Language in India?

Google search results are based on algorithm and depend on keywords for websites and their online content. When a user enters a query, the algorithm looks across the websites and articles that have related keywords. Once found, the result that fits the best search is displayed. This is known as SEO or Search Engine Optimisation.

Has the incident happened in the past?

In 2018, Google showed former US President Donald Trump's images to a search query 'idiot'. Speaking on the occasion, Google CEO Sundar Pichai expalined how the company has little to no control over the search results as they are based on Google search indexes, webpages, keywords, images attached to those pages.

Have a look at the tweets below:

Kannada language has a history of its own, having come into existence as many as 2,500 years ago! It has been the pride of Kannadigas all through these two-and-a-half millennia. 1/2#Kannada

Home to the great Vijayanagara Empire, #Kannada language has a rich heritage, a glorious legacy and a unique culture. One of the world’s oldest languages Kannada had great scholars who wrote epics much before Geoffrey Chaucer was born in the 14th century. Apologise @GoogleIndia. pic.twitter.com/Xie927D0mf

Kannada is one of the oldest language in the world. It's a beautiful language. Please make changes. Everyone loves their mother tongue ,there cannot be ugliest language.

Please do the needful pic.twitter.com/imU058Rzt0

Google, on the other hand, is showing 'Kannada as the Queen of all languages'.

We apologize for the misunderstanding and hurting any sentiments. pic.twitter.com/nltsVezdLQ

Disclaimer: This article is based on facts and is a mere representation of the ongoing controversy on the Kannada language. We respect all the languages and the sentiments of the people associated with them.

10 Most Spoken Languages in India by Number of Speakers

Kannada Language: 9 amazing facts about one of India’s most unique language

Get the latest General Knowledge and Current Affairs from all over India and world for all competitive exams.
Comment (10)