Vijay Diwas 2020: It is celebrated on 16 December every year to commemorate the victory of India over Pakistan in 1971. The day is for remembrance of our brave soldiers who have sacrificed their lives for a noble cause. Let us have a look at some patriotic quotes, slogans, wishes, messages, WhatsApp, and Facebook status that you can share, significance, etc. 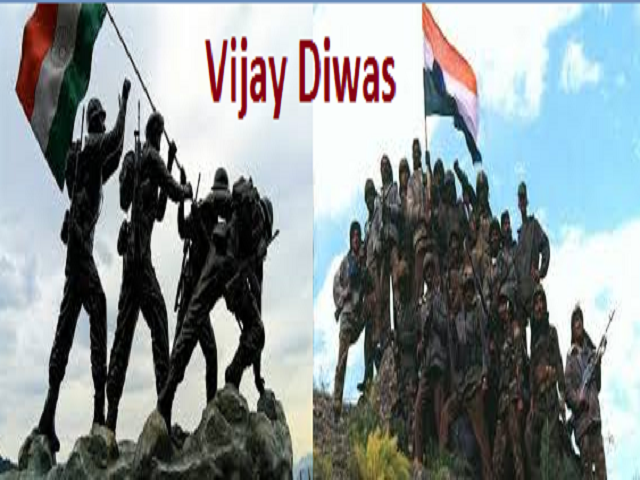 Or we can say that the Indian Armed forces secured a decisive and historic victory over the Pakistan army in December 1971 which led to the creation of a nation Bangladesh. Hence, from 16 December, the nation will be celebrating 50 years of the Indo-Pak War also known as "Swarnim Vijay Varsh". Several commemorative events are planned across the nation.

At the National War Memorial (NWM) an inaugural event will be held in New Delhi which will be attended by Prime Minister Narendra Modi. PM Narendra Modi will light up the "Swarnim Vijay Mashaal" from the eternal flame of NWM on the occasion. Four Victory Mashaals (flames) will be lit from the Eternal Flame of NWM. These Mashaals will be carried to several parts of the country including to villages of Param Vir Chakra and MahaVir Chakra Awardees of the 1971 War. Also, soil from the villages of these Awardees and from areas where major battles were fought in 1971 are being brought to the NWM.

1. "Our responsibility as citizens is to address the inequalities and injustices that linger, and we must secure our birthright freedoms for all people." - Barack Obama

2. "Freedom is never dear at any price. It is the breath of life. What would a man not pay for living?" - Mahatma Gandhi.

3. "Don't see others doing better than you beat your own records everyday, because success is a fight between you and yourself"- Chandra Shekhar Azad

5. “A thoughtful mind, when it sees a Nation’s flag, sees not the flag only, but the Nation itself; and whatever may be its symbols, its insignia, he reads chiefly in the flag the Government, the principles, the truths, the history which belongs to the Nation that sets it forth.” -  Henry Ward Beecher

6. "So long as you do not achieve social liberty, whatever freedom is provided by the law is of now avail to you."- BR Ambedkar

7. "Citizenship consists in the service of the country."- Jawaharlal Nehru

8. "Every citizen of India must remember that... he is an Indian and he has every right in this country but with certain... duties."- Sardar Vallabh Bhai Patel

9. “A republic – if you can keep it – is about limitation, and for good reason, because we are mortal and our actions are imperfect.” - Mike Pence

10. “Toleration and liberty are the foundations of a great republic.” - Frank Lloyd Wright

1. Patriotism is not short, frenzied outbursts of emotion, but the tranquil and steady dedication of a lifetime. Happy Vijay Diwas!

2.  Real Heroes don't have a name on the back of their Jersey. They wear their country's Flag. Thank you India's Real Heroes!

3. Patriotism is supporting your country all the time and your government when it deserves it. Jai Hind..Vijay Diwas

4. In the face of impossible odds, people who love this country can change it. Jai Hind!

5. On this day let us remember the sacrifice of those brave soldiers who died in the line of duty to protect our great nation. Happy Vijay Diwas! Jai Hind!

6. Thousands laid down their lives so that our country breathe this day — Never forget their sacrifice. Jai Bharat! Jai Jawan!

8. Saluting India! Where each bud blooms in its true colours, where each day is a celebration of Unity, Harmony and Synthesis. Happy Vijay Diwas!

9. Freedom is never given; it is won. Happy Vijay Diwas!

10. Patriotism consists not in waving the flag, but in striving that our country shall be righteous as well as strong. Happy Vijay Diwas!

6. Our country is a mother, a nurturer who never forgets her children’s bravery and sacrifice.

7. Better to fight for something than live for nothing.

14. Your country needs you.