Armed Forces (Special Powers) Act-(AFSPA): On March 31, 2022, Home Minister Amit Shah announced to reduce the disturbed areas under the Armed Forces (Special) Powers Act (AFSPA) in Assam, Manipur, and Nagaland. From April 1, the order will be effective and will be applicable for six months. Read on for more details.

Amit Shah tweeted, "In a significant step, GoI under the decisive leadership of PM Shri @NarendraModi Ji has decided to reduce disturbed areas under Armed Forces Special Powers Act (AFSPA) in the states of Nagaland, Assam, and Manipur after decades."

The move is the “result of the improved security situation and fast-tracked development due to the consistent efforts and several agreements to end insurgency and bring lasting peace in Northeast” by the Government."

As per the sources in the Nagaland government, "Mon district remains a "disturbed area since this is a border district, and has a strong presence of NSCN-K (YA)."

This decision comes in the backdrop of the forthright demands for AFSPA to be lifted after six civilians were gunned down in Nagaland's Mon district last December in a botched operation by security personnel. In addition, seven more civilians and one security personnel were killed in retaliatory violence, reminding the Nagaland Assembly to pass a resolution for the repeal of AFSPA.

Reduction in areas under AFSPA is a result of the improved security situation and fast-tracked development due to the consistent efforts and several agreements to end insurgency and bring lasting peace in North East by PM @narendramodi government.

The Armed Forces (Special Powers) Act-(AFSPA) was passed on September 11, 1958, to help the army in tackling the disturbed areas of Northeast India. AFSPA was implemented in Kashmir amid an increase in the insurgency in 1990.

In simple terms, AFSPA is a law that gives immense powers to armed forces to maintain the rule of law in “disturbed areas”.

Under this law, the armed forces have the authority to prohibit the gathering of five or more persons in an area. In some cases, the forces can open fire on the disturbing factors after giving due warning if found any suspicious person is.

When a state or region declared is a disturbed area?

When differences in the communities arise on the basis of race, religion, language, region, and caste and an anarchic situation arises then the state or central government is entitled to declare that area as "Disturbed Area Act".

AFSPA is levied only in those areas which have been declared as disturbed areas. Army and armed forces are sent in the area only after the implementation of this law.

As per the Section (3) of the AFSPA, it is mandatory to seek the opinion of the state government that whether a area is disturbed or not. if a area is declared as the disturbed area ,it will be under the control of special forces for at least 3 months.

Which powers are given to the Armed forces under the ASFPA?

1. Any suspect can be arrested without a warrant.

2. Armed forces can search any house without any warrant and required force can be used to search it.

3. Under this law the armed forces have the authority to prohibit gathering of five or more persons in an area.

4. In some cases the forces can open fire on the disturbing factors after giving due warning if they found any suspicious person.

5. If a person is repeated offender and tries to disturb the peace of the area, then armed forces are entitled to use force till his death.

6. If the Armed Forces suspect that any militant or offender is hiding in any house/building then the site or structure can be destroyed by the forces.

7. Any Vehicle can be stopped and searched.

8. Even in the case of wrongful action by the armed forces, legal action is not taken against them.

Arguments in the favour of AFSPA;

1. On the basis of the power given to the armed forces, they are able to protect the boundaries of the country.

2. In the absence of strict law, the armed forces will not be able to tackle the insurgent inside the country esp. in the Kashmir and North eastern region of the country.

3. The powers given in the ASFPA boost the moral of the armed forces to ensure the rule of law in the disturbed areas of the country.

Arguments against the AFSPA

1. There are so many examples when the oppressive powers given to the armed forces have been misused.

2.The armed forces are conducting fake encounters and sexually exploiting the women in the disturbed areas. 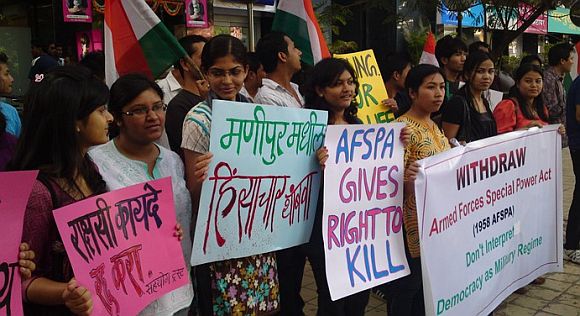 4. Some critics compared ASFPA with the Rowlatt act of the British time because like the Rowlatt Act, any suspicious person can be arrested on the basis of doubt in the ASFPA also.

As on January,2019; AFSPA is operational in entire States of Nagaland, Assam, Manipur (except Imphal Municipal area), three districts namely Changlang, Tirap and Longding of Arunachal Pradesh and the areas falling within the jurisdiction of the eight police stations in the districts of Arunachal Pradesh, bordering the State of Assam.

ASFPA could not achieve its desired goals even after 60 years of its implementation. So the state government of the disturbed area along with the central government should find out an alternative to of this law and come out with flying colours.

What are the Powers and Functions of Prime Minister of India?