What Is Meant By Click Chemistry? A Concept That Won The Prestigious Nobel Prize For Chemistry!

Any scientific advancement, discovery, or invention must be celebrated, and when it brings a Nobel Prize, it is a must to know about these. Read on to know about the concept of Click Chemistry and the three scientists behind it.

Astha Pasricha Updated: Oct 7, 2022 17:38 IST
What Is Meant By Click Chemistry? A Concept That Won The Prestigious Nobel Prize For Chemistry

Chemistry is all about making bonds and chemical reactions. It deals with combining two things to create a third.

Recall your school chemistry classes and you will remember your teaching definition of a chemical reaction as a process involving one or more reactants getting converted into products.

While the study of chemistry involves numerous advancements, one such novel advancement has led three notable scientists, Barry Sharpless, Morten Meldal, and Carolyn Bertozzi, to the Nobel Prize in Chemistry this year. Eager to know the name of this new phenomenon?

BREAKING NEWS:
The Royal Swedish Academy of Sciences has decided to award the 2022 #NobelPrize in Chemistry to Carolyn R. Bertozzi, Morten Meldal, and K. Barry Sharpless “for the development of click chemistry and bioorthogonal chemistry.” pic.twitter.com/5tu6aOedy4

With click chemistry, a beginning of functionalism for chemistry sans interfering with the normal functioning of the cell has begun.

Morten Meldal belonging to the University of Copenhagen in Denmark and Barry Sharpless of Scripps Research in the United States together laid the fundamental groundwork for a form of chemistry that is functional, in which the molecular building blocks snap together rather efficiently and speedily. Carolyn Bertozzi, belonging to Stanford University later took the concept of Click Chemistry forward by using it in living organisms.


Johan Aqvist, Chair of the Nobel Committee for Chemistry, said that "this year's Prize in Chemistry deals with not overcomplicating matters, instead working with what is easy and simple. Functional molecules can be built even by taking a straightforward route," 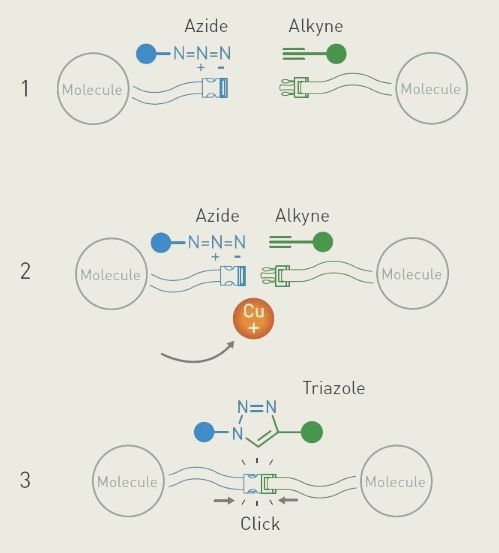 Barry Sharpless is not a new name in the field of chemistry, and especially if we talk about the Nobel, we can’t miss to say that this was Barry’s second time winning the Nobel for chemistry. Barry Sharpless led the Click Chemistry phenomenon and gave his best to its completion.


The man coined the concept around 2000. By then, it was a form of reliable and simple chemistry where reactions are super fast without the creation of unwanted by-products.


Eventually, Sharpless and Meldal independently added the concept of the copper-catalyzed azide-alkyne cycloaddition, the crown of Click Chemistry.


Alkyne is nothing but a hydrocarbon having at least one carbon-carbon triple bond, and Azide is an N3 organic compound. Who knew that a single, simple chemical reaction could be so effective that it would be made to use in DNA mapping, drug development, and many more uses?


Bertozzi has taken the concept of Click Chemistry to greater heights. The scientist brought forward that work inside living creatures to represent essential but elusive biomolecules on the surface of cells known as glycans.


Such reactions are now made to use all over the globe for the purpose of investigating cells and tracking biological processes. Researchers these days have enhanced the targeting of cancer drugs with the use of bioorthogonal reactions, which are now being examined in clinical trials.

Humans have always borne the brunt of reactants harming the area around the targeted cells, however, with click chemistry, this would become history. The stupendous click chemistry phenomenon makes use of only the reactants and do not hurt other materials present in the reaction breaker. This makes it rather easy to be used inside the cells, as they would ensure the dissolution of any desired material, leaving the remaining cellular processes untouched and undamaged. This very fact would lay a foundation for many more incredible discoveries, especially in the treatment of hazardous human diseases like cancer.

Which three scientists have won the Nobel Prize in Chemistry 2022?

Carolyn R. Bertozzi, Morten P. Meldal, and Karl Barry Sharpless are the three scientists who have been awarded the prestigious Nobel Prize in Chemistry in 2022.
Get the latest General Knowledge and Current Affairs from all over India and world for all competitive exams.