World Emoji Day 2021: It is observed on July 17 and is a day of celebration of all emojis. Know more about the day, its history, celebration, etc.

World Emoji Day 2021: In the Internet Age now communication goes far beyond just by pressing a simple text message. Small iconic images that are mostly seen on social media or text messages are known as emojis which are more popular on the internet today.

World Emoji Day is celebrated to represent an idea or an emotion through electronic means.

Emoji is a small digital icon becoming popular these days and no doubt is an integral part of our conversation. When we feel lazy or when we are at a loss for words then we use emojis to express what we want to. For every feeling, there are emojis now. From the past years, emojis have evolved. It not only expresses simple human feelings but more than that.

Let us first see history from where and how emojis have evolved and started.

The first emoji was created in 1999 by Shigetaka Kurita, an engineer working at a Japanese mobile operator, NTT Docomo. He creates 176 emojis for the release of the Japanese mobile phone operator NTT DoCoMo's integrated mobile internet service "i-mode", debuting in February 1999. For only 250 characters the service was allowed which gave Kurita the challenge to figure out a way to communicate in an expressive but short way.  In Yahoo Messenger, the oldest 'mainstream' emoji was used. In 2010, by Unicode emoji was finally standardised. That is brands like Google, Microsoft, Facebook and Twitter can start creating their own versions of Emoji that would appear even if a message was sent from another operating system. Let us tell you that Unicode 6.0 is the largest release of emoji yet, consisting of 994 characters like emotions, a pile of poo, families, hearts, animals, clothes, food, city images, clocks, and country flags.

The main purpose of the day is to promote the use of emojis and spread the emoji for the enjoyment that they bring to all of those around us. Emojis are for all of us.

Who gave approval to emojis?

A list of emojis was published and approved by the Unicode Consortium every year. When emojis are published, mobile operating systems like Android and iOS introduce them on their platforms. Let us tell you that the Unicode consortium has members who vote and submit their opinion on the emojis for making it official. Members that are included: Netflix, Apple, Facebook, Google, Tinder, etc.

Features of new Emojis released in 2020 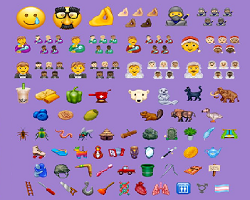 In 2020, more than 110 new emojis will be added including Bubble Tea, Smiling Face With Tear, bottle-feeding parents, and the Transgender Flag. Unicode Consortium announced more than 110 emojis which form a part of Emoji 13.0. Apple at its yearly Worldwide Developers Conference keynote announces the upcoming release of iOS 14, their operating system for the iPhone. One of the new features is adding an emoji search to the keyboard.

Features of new Emojis released in 2019

Emojis that are released this year are inclusivity. Emoji 12.0 consists of features that are gender-neutral and more skin tones for users. Also, a new list of emojis has representation for accessibility like mechanical arm and leg, ear with a hearing aid, deaf person, and person with probing cane. According to Google, it will introduce these new gender-neutral emojis with Android Q later this year. On this day an interracial couple of emojis is made by Tinder.

Apple has also added the Ginger emoji with the release of Apple's iOS6. 70 new characters are being added to the emoji palette to represent a better vast demographic of users, including different ringtones and more expressions. To mark World Emoji Day, Apple has released previews of the number of new emojis which will be rolled out later this year. It also consists of a range of disability theme designs.

The preview's other new emoji depict guide dogs as well as a sloth, flamingo, butter, and falafel.

So, now you may have come to know when the first time World Emoji Day is celebrated and who made Emoji.

When was World Emoji Day created and by whom?

In 2014, World Emoji Day was created by the founder of Emojipedia named Jeremy Burge.

When was the first Emoji created?

The first emoji was created in 1999 by Shigetaka Kurita, an engineer working at a Japanese mobile operator, NTT Docomo.

When is World Emoji Day observed?

World Emoji Day is observed on July 17 and is a day of celebration of all emojis.