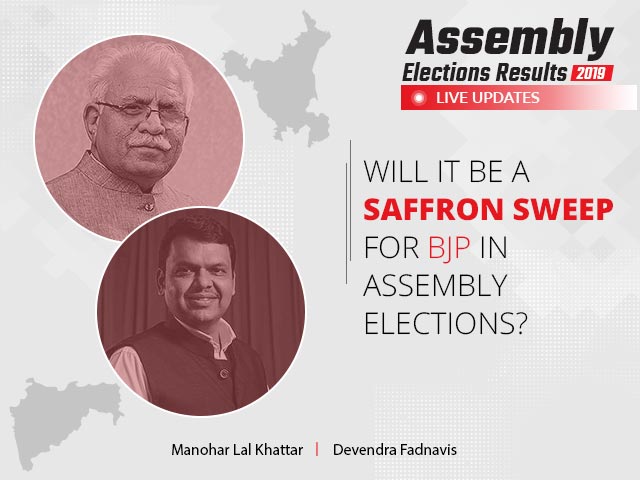 Maharashtra - Haryana Election Results 2019 Live Updates: PM Modi while addressing party workers from Varanasi has said that BJP will form government in both the states after Assembly Election Results 2019. According to the latest update, BJP-Shiv Sena is all set to return for a historic 2nd term with confortable majority. Earlier CM Devendra Fadnavis addressed the media and thanked voters of Maharashtra for reposing faith in his government. He also added that he will keep working to fulfil the aspirations of the people of the state.

Shiv Sena Chief Uddhav Thackeray also termed BJP-Sena victory in Maharashtra as a clear mandate for the alliance. Addressing speculation about Shiv Sena pushing for CM’s post in the state, he said that he will discuss the matter with alliance partner BJP as per the agreement reached during pre Lok Sabha alliance.

Political equations are changing rapidly in Haryana as well, with sources claiming that Dushyant Chautala’s JJP will back Manohar Khattar’s BJP. In similar news, media agencies have also reported that Khattar has reached out to Haryana Governor asking for more time to stake claim to form the government. 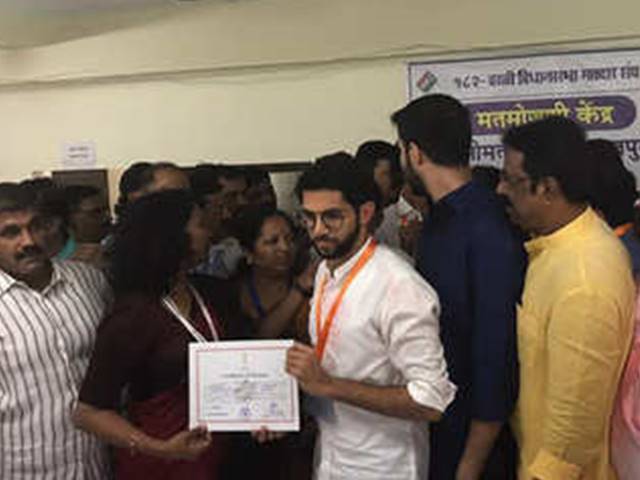 Devendra Fadnavis thanked voters for giving a clear mandate to BJP-Shiv Sena alliance. He said that he and his government will work to fulfil aspirations of the people of the state.

Shiv Sena chief Uddhav Thackeray briefs media, terms results a clear mandate for BJP-Shiv Sena alliance in Maharashtra. Confirming the media reports, Sena chief also asked that his party will push for 50:50 formula for government formation. He said that 50:50 formula for CM post will be discussed with alliance partner BJP.

Baramati assembly seat was won by Ajit Pawar with a hefty margin of 1.62 lakh votes. As per the EC data available so far this is the largest win margin in the entire Maharashtra state. #MaharashtraAssemblyElections2019

Shiv Sena candidate Ajay Vinayak Choudhari has won from the Shivadi Assembly Constituency. He defeated Santosh Raghunath Nalawade of the MNS to secure the seat. #MaharashtraAssemblyElections2019

Congress spokesperson Randeep Surjewala has conceded defeat BJP’s Leela Ram on Kaithal assembly seat. As per the latest data, Surjewala lost by a close margin on 530 votes. On the topic of Congress joining hands with JJP, he said that Bhupinder Hooda and Congress state President Kumari Shejla will decide on the topic and brief the people of the state.

Haryana Election Result 2019 is witnessing a see-saw battle between BJP and Congress at 1 PM. As per the latest data available from Election Commission, BJP is leading on 36 seats while Congress is leading on 35 seats. JJP has retained it lead on 10 seats and is all set to be the King Maker in Haryana.

As per sources, Congress has summoned Bhupinder Hooda to Delhi along with all the winning candidates from the party for consultation regarding government formation.

Live Update @ 11:30 AM: Haryana CM Khattar has been asked to rush to BJP HQ in Delhi for consultations regarding government formation in Haryana. On the other hand, JJP's Chautala has sought CM's post to extend support to Congress part to form government.

With developments happening thick-and-fast, tides are again favouring BJP. Currently, BJP is leading on 44 seats while Congress has retained lead on 30. JJP with lead on 13 seats is expected to hold the 'keys to kingdom' as per political analysts.

Finally, revealing his cards, JJP’s Dushyant Chautala has demanded CM’s post from Congress party to extend support to from government in Haryana, as per media reports. On the other hand, BJP has asked ally Akali Dal’s Prakash Singh Badal and Sukhbir Singh Badal to talk to the JJP leader to join hands with BJP.

It would be interesting to see Dushyant Chautala’s next move and who he decides to join.

With BJP - Shiv Sena combine securing a comfortable majority in Maharashtra, many within political circles have started clamouring for the post of Deputy for Shiv Sena sicon Aaditya Thackeray. However, with BJP along leading in 107+ seats, will it will be willing to give-up such an important portfolio to an alliance partner?

Trends at 9:45 suggest,  BJP leading on 107 seats while Shiv Sena is leading on 67 seats. On the other hand Congress is leading on 35 while Sharad Pawar led NCP is progressing positively on 37 seats. Meanwhile, Raj Thackeray’s MNS has opened its book with one seat while AIMIM is leading in 2 seats.

BJP-Shiv Sena has crossed half-way mark in both Haryana and Maharashtra as per initial trends. BJP- Shiv Sena leading on 160 seats, while in Haryana, Congress is giving close fight with 22 seats while BJP is currently leading in 47 seats.

Out Going CM Manohar Khattar leading from Karnal, Congress leading in Sonipat, which happens to be a bastion on Bhupinder Singh Hooda. BJP is tied into a close race with Congress with INLD and JJP likely to play king maker in the assembly election results 2019.

With early trends indicating 7 seats for BJP and 6 seats for Congress, Haryana seems to be headed for a hung assembly. JJP likely to be king maker.

Counting of Votes begins for Haryana and Maharashtra Assembly Elections 2019. Going by the exit poll numbers, BJP is expected to gain early lead in the counting in both the states. In Maharashtra, BJP is expected to win close to 200 seats, surpassing the 145 seat mark which is required to form government. Similarly, for Haryana, which is a 90 member assembly, will need BJP or Congress would need 45 seats to form government.

With the clock nearing 8 AM, the counting of votes for Haryana and Maharashtra Elections 2019 will commence. With BJP slated to a clear victory in both the states, excitement has been high among votes to see who will form government. Get latest trends and updates about who is winning and who is not for Assembly Elections 2019 here.

Haryana Election Results 2019 is expected to see a tough fight. The 90-member Haryana assembly election is expected to see a hung verdict, with Manohar Lal Khattar led BJP securing 35 to 40 seats, while Bhupinder Singh Hooda led Congress also getting around 33 to 40 seats. Many are predicting Dushyant Chautala's Jannayak Janata Party (JJP) to turn out to be the King Maker today.

A majority of exit polls are predicting a clear win for BJP – Shiv Sena alliance in Maharashtra. In fact, CM Devendra Fadnavis has gone on record to say that BJP will return to power with over 220 seats in Maharashtra. Even conservative estimates show BJP winning close to 200 seats with Congress-NCP alliance secure a meagre 64 seats.

Exit Polls and Predictions – What do trends say?

In Maharashtra, CM Devendra Fadnavis is all set to return for a second term with majority of exit polls predicting a clean sweep for the saffron alliance in the state. Haryana on the other hand is likely to see a close fight between BJP and Congress with both expected to win around 40 seats. This has led many to believe that Jannayak Janata Party, led by Dushyant Chautala, will turn out to be the Kingmaker in the state. Apart from Maharashtra and Haryana, counting will also be held for by-elections of 51 assembly seats and 2 Lok Sabha seats spread across 18 states. With overall voting percentage hovering at around 56% mark, the by-elections are expected to throw some surprises our way.