If want to win the ‘Iron Throne’ of the corporate world, then you must follow these 5 MBA lessons that Game of Thrones has in store for you!

With the starting today, almost everyone is suffering from the Game of Thrones fever. Be it college kids or young professionals, everyone is either hooked on to online streaming services or are trying to scout torrents to download the Game of Thrones Season 7 Episode 1 online. And why not, it is one of the most successful Television Series of recent times that has captured both, hearts and minds of the young audiences.

While being one of the most entertaining programmes on small screen, the HBO’s Game of Thrones has also been a great learning resource for MBA students and young management graduates who are joining the corporate world. Just like the corporate world, the story of Game of Thrones revolves around power struggles and politicking which makes it an ideal case study for MBA students to prepare for the cut-throat world that they would enter.

If you want to be successful in your professional career, you must follow these 5 MBA lessons that Game of Thrones teaches us!

1. Do a thorough SWOT Analysis

MBA’s love SWOT analysis or atleast get into the habit of regularly doing it. If you thought that SWOT analysis is only done as part of the project and will not be useful in real life situations, you are completely wrong. In fact, we as humans are in constant habit of performing SWOT analysis on daily basis even for the most basic of the decisions that we have to take.

This belief of important is SWOT analysis has been a recurring theme in the Game of Thrones story line over the 6 seasons. In fact, one can find multiple examples where people have failed to perform an honest SWOT analysis of their strengths and weaknesses and have ended up paying a hefty price for it. 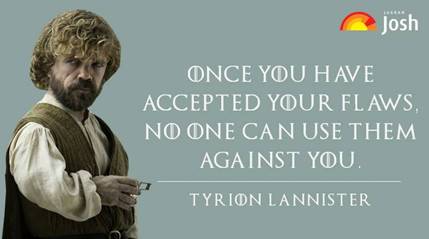 GOT Example: For instance, during the Battle of Blackwater, the King’s Landing was surrounded on all the sides by Stannis Baratheon’s forces. The Capital of ‘Seven Kingdom’ was scare on resources, ammunition and almost every imaginable factor was against them. But Tyrion (the then Hand of the King) then realizes that their biggest strength would be ‘wild fire’ and uses it to defeat Stannis and defended the Iron Throne.

MBA Lesson: In your professional career, you would also be pressed against the wall with almost everything going against you. But in such times, instead of brooding over it, the right way ahead would be to capitalize upon your strengths and find out the right strategy to solve the problem.

The balance of power is kept in equilibrium by loyal stakeholders and partners. This is one of the first concepts you would learn as part of your MBA training. So, right from the day 1, make sure you start identifying the people you can trust and who can back you up in times of crisis.

GOT Example: The Game of Thrones story line has shown us several such characters which were betrayed and had their careers ruined due to disloyal allies. Be it Tyrion’s fall from being the Hand of the King to being banished to The Wall or Jon Snow’s death at the hands of his brothers from the Night’s Watch; all these examples emphasis upon the role that allies play in the all important power struggle of Westeros. 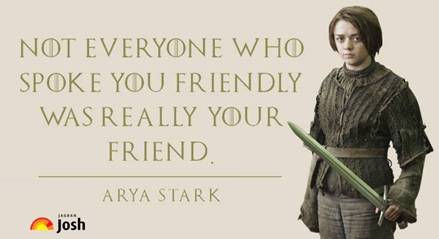 MBA Lesson: In a power struggle the ultimate advantage that you can have is to have good allies. Therefore, it is very important to find dependable partners and stakeholders who will stand by you in thick and thin to help you sail through troublesome times. Once you find such allies, do keep them close and make sure that they do not turn a foe. Or else the old adage of ‘A disloyal ally is worse than an enemy’ may turn out to be true for you.

Today’s corporate life is where one has to be multi-talented and multi-tasking. In fact, companies are increasingly hiring talents who are able to contribute to the organization in more than just a single way. While you might have multiple responsibilities, the end goal or focus would always be one.

GOT Example: As far as Game of Thrones is concerned, Cersie Lannister is the ideal example of  a character who has singular goal of developing an iron-grip over Westeros. She is ready to go to any lengths, overcome any obstacles and sustain any consequences that may come in her way while achieving this goal. Be it getting rid of Tyrion or eliminating Stark Name which was their biggest nemesis or developing the faith militant and then burning it down to the ground; she has overcome all these challenges due to her singular focus and goal oriented approach. If you look at her today, she is the Queen of the Seven Kingdoms’; this truly shows the magic that singular goal focused approach can work in your life. 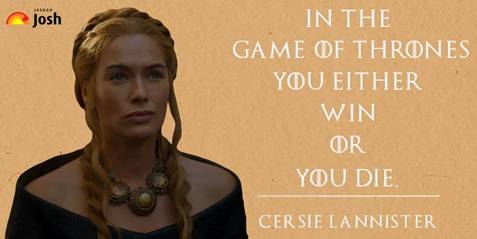 MBA Lesson: The singular approach to developing a product, service of brand is pivotal as it would give your efforts the necessary direction. Moreover, it would also help you gauge any of the shortcoming or weaknesses and help you design strategies to overcome them.

4. Do not underestimate anyone

The 21st century is known to be century of opportunities, where everyone has the chance to move ahead in life, backed by the right strategy and correct approach and a lot of hard work. A simple Google search about rags to riches story would throw up hundreds of examples of people who have become successful despite having several drawbacks. On similar lines, you can also find several stories where billionaires have fallen to ground because they could not perceive the threats that were faced with.

GOT Example: The ideal example in this context from Game of Thrones would be Tywin Lannister. Tywin was one of the strongest man in Westeros. In fact, despite deteriorating monetary might of the Lannisters, he literally ruled the Kingdom as the Hand of the King. But, what eventually brought his downfall was his own dwarf son Tyrion, whom he never really considered talented enough to bear the Lannister name. This would be the ideal example of how his underestimation of Tyrion drove him to kill his father. And when you look at Tyrion today, he is the primary advisory of Daenerys, who with her ‘Dragon’ might is planning to take over the seven kingdoms.

MBA Lesson: The primary lesson to here would be to never underestimate any of your competitors or even peers. Everyone has potential to do great things, how they exploit this potential and grow their might would eventually determine their success. Had Tywin groomed Tyrion into a great political advisor instead of sidelining him, today, he might have been the one who would bring glory to Lannister name.

No matter how good the planning is; things would never work out as per your plan. So a good manger or even a good leader would always have a back-up plan ready when things don’t really work themselves out as per the pre-decided strategy or plan.

GOT Example: In Game of Thrones, almost everyone has a plan! However, the common theme which resonates across the 6 seasons is that plans don’t work as decided, so you have to ready with backup. But here’s where two characters mark a stark difference from others i.e. Petyr Baelish and Varys. Both these master strategists always have an alternative up their sleeves when things start to go south for them.

Both Petyr and Varys were not from noble families but still made their place among the key players of the Game of Thrones, all backed by their brilliant minds and strategic plans. Petyr, who started with cozying up to the Lannisters to betraying Starks and finally using Sansa to gain a strong hold over the divided north; he has always had a back-up plan ready to sort things out.

MBA Lesson: As a working professional, you would surely encounter where all your planning and strategy would fail. Even the most basics of the decision that are backed by data and statistics would also backfire. In such times, a good manager would always have a rainy day policy, an alternate strategy and plan to put into practice to keep things on track.

These are just the five core Management lessons from Game of Thrones that can help young MBA graduates waling out of B-schools to navigate their way in the corporate world. But, being an epic of magnanimous proportion, there are many other sub-themes and lessons that can inspire young mangers and influence the way they run their business.

If you feel that we have missed out on any other important MBA lesson can be inferred from Game of Thrones, please let us through your comments below.

You can also bookmark this page and subscribe to our newsletter to get more of such interesting articles updates about the MBA.