A good leader can see the future and also helps the followers to get adapted to that as easily and seamlessly as possible. The present SBI Chairman has done exactly the same. 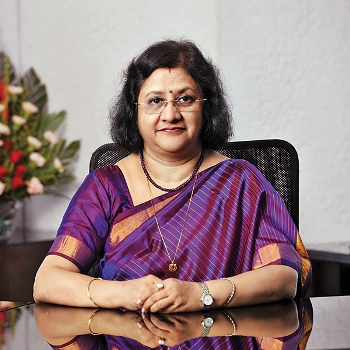 Arundhati Bhattacharya made news when she became the first woman chairperson of the State Bank of India, the largest commercial lender of the country. But that is not what makes her different in an industry which is basically considered a male bastion till now, but her vision for the future of banking does. She does not rest on past laurels but creates the way to win more and more laurels in the future.

The first ever lady boss of the 208-year old lender is a post graduate in English Literature from the Jadavpur University in Kolkata. As she says, her teachers always wanted her to do something that would utilize her talent and creativity. Hence, banking was never on her radar. But in 1977, when she came to know that her friends are filling up the application form for SBI PO, she also chipped in and made it to the final list. After that, there was no looking back as she became the topmost boss of the most prestigious bank in India.

It was not the end of road for Arundhati Bhattacharya once she became the Chairman of SBI as she had made tremendous efforts in her two years as the boss to make SBI one of the best banks in the world and with the new merger proposal of SBI with other associate banks, it will come in the top 50 list of international banks. So, what are the things that make her different?

The present SBI Chairman has a vision and she has the guts to put that in practice. This is what makes her different from others. Being a woman, it is no mean feat to occupy that coveted corner room at SBI Head Office in Mumbai but she has gone way beyond that: towards a better SBI, towards a better banking experience for the generations to come. Truly, she is a role model not only for women but for leaders as a whole.