After the reports of leak of 10 Maths and Class 12 Economics Papers being verified, CBSE has issued a circular announcing the examinations for both papers will be reconducted.

After the reports of leak of Class 10 Mathematics and Class 12 Economics Paper, the Central Board for Secondary Examination (CBSE) has decided to reconduct the examinations for both papers.

As per the reports from various sources, the CBSE Class 10 Maths paper was leaked last night, i.e., the Tuesday night and it was exactly similar to the original CBSE Class 10 Maths Board Paper that held today. The Class 12 Economics exam was held on 26 March, 2018.

CBSE released a circular which stated, “The board has taken cognizance of certain happenings in the conduct of certain examinations as are being reported. With the view to uphold the sanctity of the Board Examinations and in the interest of the fairness to the students, the Board has decided to reconduct the examinations in the following subjects. Dates for fresh examinations and the other details shall be hosted on the CBSE website within a week."

Below we are providing a screenshot of the CBSE’s circular: 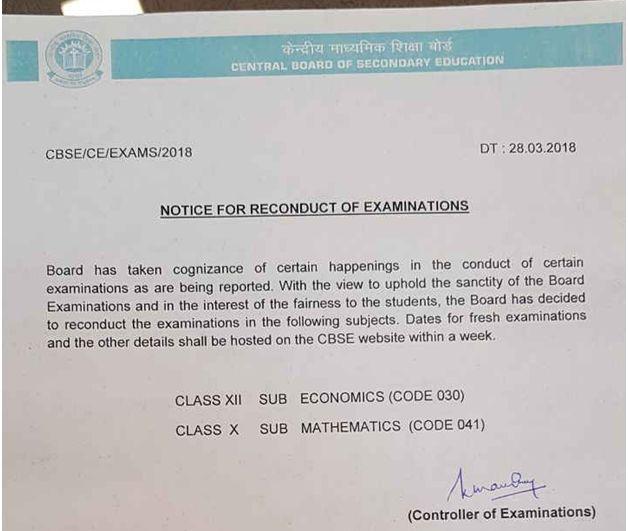 Earlier, the CBSE had released a circular that refuted all the reports claiming the leak of Class 12 Accountancy question paper. The circular stated, "All the seals have been found intact at all the centres. During the process of examination, however, at local level, some miscreants have tried to play mischief by circulating messages through WhatsApp and social media to disturb the sanctity of the examinations."