CBSE Class 12 Accountancy Sample Paper 2018 is available here. This Sample Paper is recently released by CBSE (Central Board of Secondary Education). You can download this paper and its Marking Scheme in PDF format.

CBSE (Central Board of Secondary Education) has recently released Sample Papers for Class 12th and Class 10th board exams. These Sample Papers are based on latest CBSE Syllabus. To understand the latest Examination Pattern and Blue Print of the CBSE Class 12 Accountancy board exam 2018, students must solve this paper.

Complete CBSE Class 12 Accountancy Sample Paper 2018 is given below

(1) This question paper contains two parts- A and B.

3) Part B has two options- ‘Analysis of Financial Statements’ and ‘Computerised Accounting’.

(4) Attempt any one option of Part B.

(5) All parts of a question should be attempted at one place.

(Accounting for Partnership Firms and Companies)

Question1. Six friends started a partnership business by investing Rs. 2,00,000 each. They decided to share profit equally. Name the terms by which they will be called individually and collectively.

Question5. Why are irredeemable debentures also known as perpetual debentures?

Question6. Distinguish between shares and debentures on the basis of convertibility.

(i) When company decided not to record the issue of 9 % Debentures as collateral security.

(ii) When company decided to record the issue of 9 % Debentures as collateral security.

On the date of death of a partner the partnership deed provided for the following:

Prepare R’s Capital Account on his death to be presented to his executors.

M M Limited is registered with an Authorised capital of Rs. 200 Crores divided into equity shares of Rs. 100 each. On 1st April 2016 the Subscribed and Called up capital of the company is Rs. 10,00,00,000. The company decided to help the unemployed youth of the naxal affected areas of Andhra Pradesh, Chhattisgarh and Odisha by opening 100 ‘Skill Development Centres’. The company also decided to provide free medical services to the villagers of these states by starting mobile dispensaries. To meet the capital expenditure of these activities the company further issued 1,00,000 equity shares during financial year 2016-17. These shares were fully subscribed and paid.

Present the share capital of the company in its Balance Sheet. Also identify any two values that the company wants to propagate.

V K Limited purchased machinery from Modern Equipment Manufacturers Limited. The company paid the vendors by issue of some equity shares and debentures and the balance through an acceptance in their favour payable after three months. The accountant of the company, while Journalising the above mentioned transactions, left some items blank. You are required to fill in the blanks. 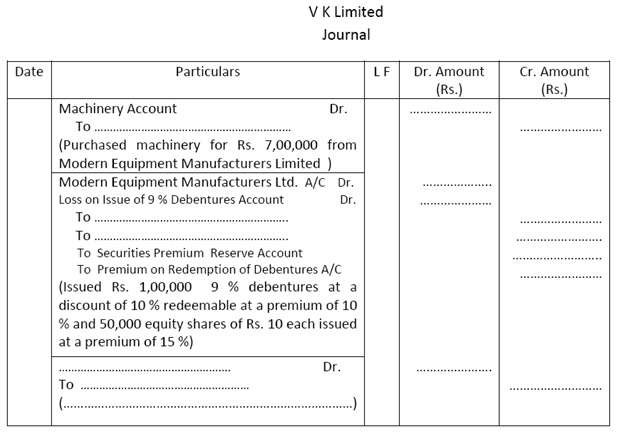 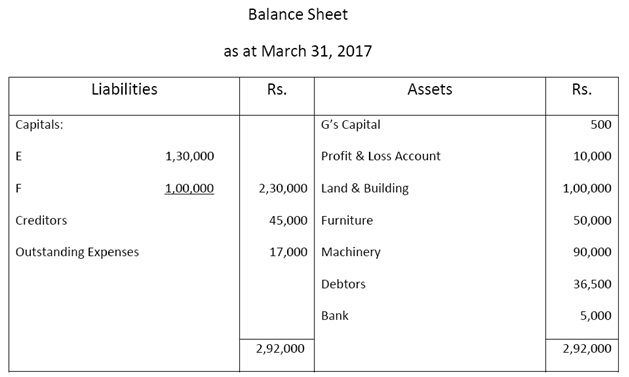 F was appointed to undertake the process of dissolution for which he was allowed a remuneration of Rs. 5,000. F agreed to bear the dissolution expenses. Assets realized as follows:

(iv) All the Debtors were realized at full value.

Creditors were payable on an average of 3 months from the date of dissolution. On discharging the

Creditors on the date of dissolution, they allowed a discount of 5%.

Pass necessary Journal entries for dissolution in the books of the firm. 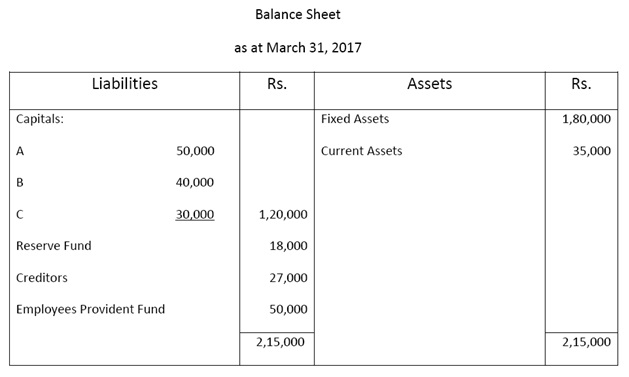 From April 1, 2017, they decided to share future profits equally. For this purpose the followings were agreed upon:

(ii) Fixed Assets will be depreciated by 10%.

(iii) Capitals of the partners will be in proportion to their new profit sharing ratio. For this purpose, Current Accounts will be opened.

Pass necessary Journal entries for the above transactions in the books of the firm.

Himanshu and Vikrant are partners in a firm and share profits equally. Their Balance Sheet as on

15. On April 1, 2013, XY Limited issued Rs. 9,00,000 10% debentures at a discount of 9%. The debentures were to be redeemed in three equal annual instalments starting from March 31, 2015. Prepare ‘Discount on Issue of Debenture Account’ for the first three years starting from April 1, 2013. Also show your workings clearly. 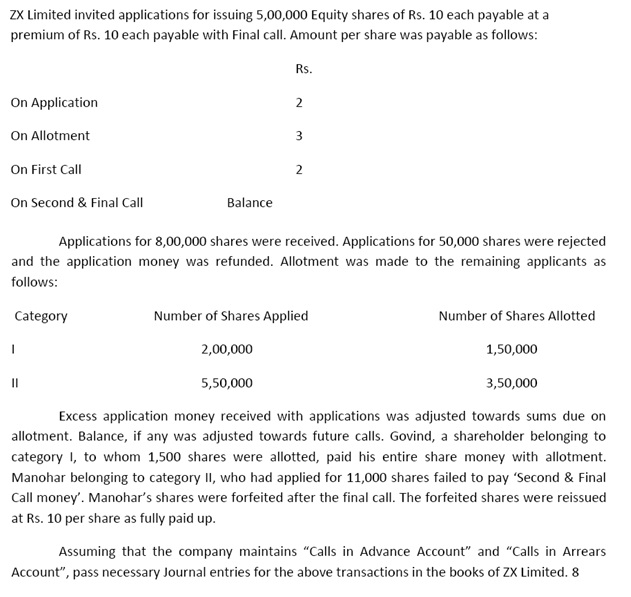 (a) AX Limited forfeited 6,000 shares of Rs. 10 each for non-payment of First call of Rs. 2 per share. The Final call of Rs. 3 per share was yet to be made. The Final call was made after Forfeited of these shares. Of the forfeited shares, 4,000 shares were reissued at Rs. 9 per share as fully paid up. Assuming that the company maintains ‘Calls in Advance Account’ and ‘Calls in Arrears Account’, prepare “Share Forfeited Account” in the books of AX Limited.

(b) BG Limited issued 2,00,000 equity shares of Rs. 20 each at a premium of Rs. 5 per share. The shares were allotted in the proportion of 5 : 4 of shares applied and allotted to all the applicants. Deepak, who had applied for 900 shares, failed to pay Allotment money of Rs. 7 per share (including premium) and on his failure to pay ‘First & Final Call’ of Rs. 2 per share, his shares were forfeited. 400 of the forfeited shares were reissued at Rs. 15 per share as fully paid up.Showing your working clearly, pass necessary Journal entries for the Forfeited and reissue of Deepak’s shares in the books of BG Limited. The company maintains ‘Calls in Arrears’ Account’.

(c) ML Limited forfeited 1,200 shares of Rs. 10 each allotted to Ravi for Non-payment of ‘Second & Final Call’ of Rs. 5 per share (including premium of Rs. 2 per share). The forfeited shares were reissued for Rs. 10,800 as fully paid up. Pass necessary Journal entries for reissue of shares in the books of ML Limited.

A, B & C were partners in a firm sharing profits & losses in proportion to their fixed capitals. Their Balance Sheet as at March 31, 2017 was as follows: 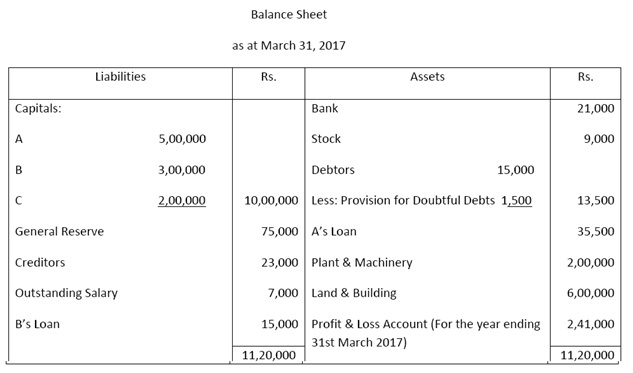 On the date of above Balance Sheet, C retired from the firm on the following terms:

(ii) Provision for Bad Debts will be maintained at 5% of the Debtors.

(iv) A agreed to repay his Loan.

(v) The loan repaid by A was to be utilized to pay C. The balance of the amount payable to C was transferred to his Loan Account bearing interest @ 12% per annum. 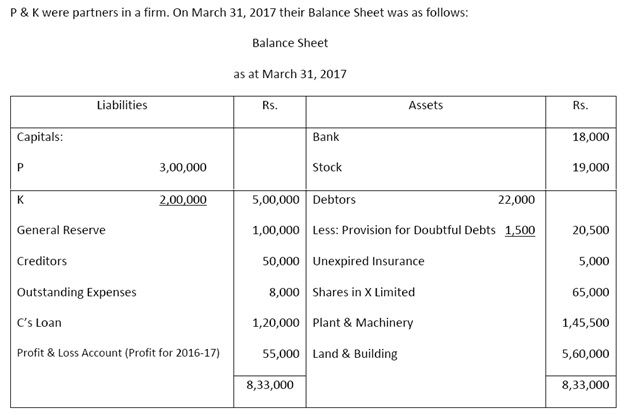 On April 1, 2017, they decided to admit C as a new partner for 1/4th share in profits on the following terms:

(i) C’s Loan will be converted into his capital.

(iii) 10% depreciation will be charged on Plant & Machinery and Land & Building will be appreciated by 5%.

(iv) Capitals of P & K will be adjusted on the basis C’s capital. Adjustments be done through bank and in case required overdraft facility be availed.

Question18: Give any two examples of cash inflows from operating activities other than cash receipts from sale of goods & rendering of services.

For the purpose of preparing their respective Cash Flow Statements, under which category of activities the purchase of shares will be classified by P P Limited and G G Limited?

Question20: M K Limited is a computer hardware manufacturing company. While preparing its accounting records it takes into consideration the various accounting principles and maintains transparency. At the end of the accounting year, the company follows the ‘Companies Act, 2013 and Rules there under’ for the preparation of its Financial Statements. It also prepares its Income Statement and Balance Sheet as per the format provided in Schedule III to the Act. Its Financial Statements depict its true & fair financial position. For the financial year ending March 31, 2017, the accountant of the company is not certain about the presentation of the following items under relevant Major Heads & Sub Heads, if any, in its Balance Sheet:

(a) Advice the accountant of the company under which Major Heads and Sub Heads, if any, he should present the above items in the Balance Sheet of the company,

(b) List any two values that the company is observing in the maintenance of its accounting records and preparation of its financial statements.

Question22: Following is the Statement of Profit & Loss of X L Limited for the year ended March 31, 2017:

Question23: From the following Balance Sheet of Ajanta Limited as on March 31, 2017, prepare a Cash Flow Statement: 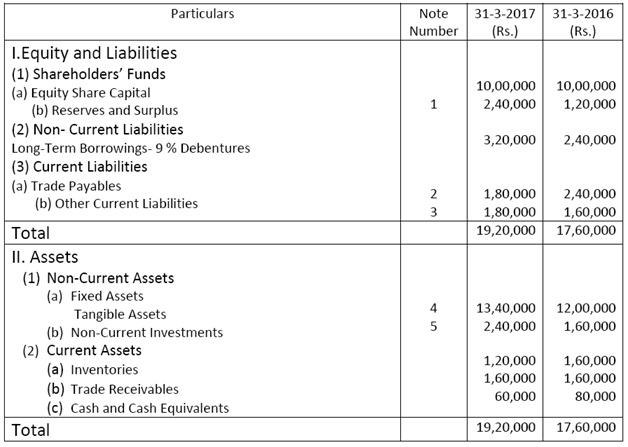 Question18. While navigating in the workbook, which of the following commands is used to move to the beginning of the Current row:

Question19. Join line in the context of Access table means:

a. Graphical representation of tables between tables

b. Lines bonding the data within table

Question20. Enumerate the basic requirements of computerized accounting system for a business organization.

Question21. The generation of ledger accounts is not a necessary condition for making trial balance in a computerized accounting system. Explain.

Question22. Internal manipulation of accounting records is much easier in computerized accounting than in manual accounting. How?

Question23. Computerisation of accounting data on one hand stores voluminous data in a systematic and organized manner whereas on the other hand suffers from threats of vulnerability and manipulations. Discuss the security measures you would like to employ for securing the data from such threats.