CBSE Solved Paper for Class 12 Physics board exam 2017. This completely solved paper is very helpful for the students preparing for CBSE Class 12 board exam 2018. With this paper, students can easily understand the level of questions which can be asked in CBSE board exam. 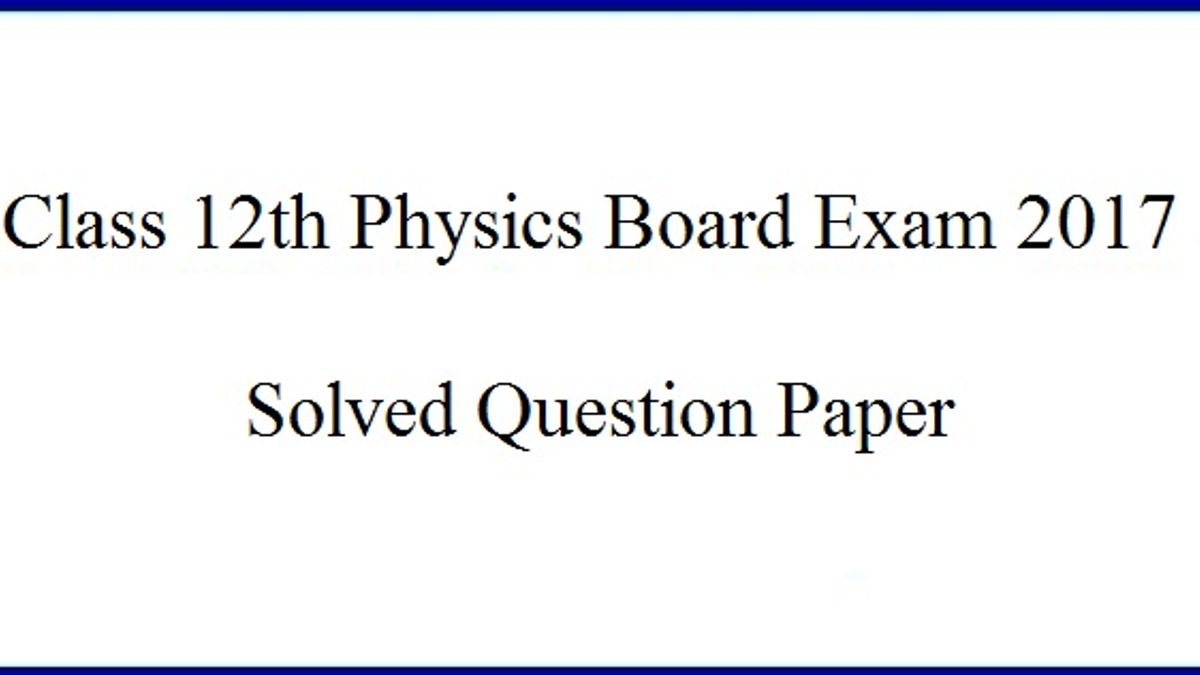 Solved question paper of CBSE 12th Physics board exam 2017 is available here for download in PDF format. Students can also download the complete paper with the help the download link given at the end of this article. CBSE Class 12th Physics 2017 board exam was held on 15th March.

If you are looking for analysis of the question paper then please visit the link given below:

To download unsolved question paper please refer to the link given below:

General guidelines given in the paper:

• Code number given on the right hand side of the question paper should be written on title page of the answer-book by the candidate.

• Please write down the Serial Number of the question paper before attempting it.

• 15 minutes time has been allotted to read this paper. The question paper will be distributed at 10:15 a.m. to 10:30 a.m., the student will read the question paper only and will not write any answer on the answer-book during this period.

Some randomly selected questions from the paper are given below

Question: What is the relation between electric current (I) and drift velocity (vd) of electrons?

‘A’, the drift velocity is given by, I = n e A vd where, e is the magnitude of charge on electrons.

Question: Give two examples of Paramagnetic and Ferromagnetic material?

Question: Name the network formed by joining 4 to 6 computers in an office?

Question: In a CE transistor amplifier, there is a current and voltage gain associated with the circuit. In other words there is a power gain. Considering power a measure of energy, does the circuit violate conservation of energy?

In case of CE transistor amplifier, the power gain is very high. In this type of circuit, the extra power required for amplified output is obtained from DC source. Thus, the circuit used does not violet the law of conservation.

Question: The refractive index of a medium with respect to air is √3. What is the angle of refraction, if the unpolarized light is incident on it at the polarizing angle of the medium?

Let angle of incident be ip and angle of refraction be r.

It is the loss of strength of a signal while propagating through a medium.

A sinusoidal carrier wave can be modulated in three ways:

The two polaroids are parallel to each other initially. If I1 is the intensity of light from the first polaroid, then the intensity of transmitted light by the second is: I = Io cos2 θ = Io cos 0o = Io.

Which means transmitted intensity is reduced to 75 % of the maximum intensity.

Which means transmitted intensity is reduced to 25 % of the maximum intensity.

Question: Define the terms ‘threshold frequency’ and ‘stopping potential’ in the study of photoelectric emission. Explain briefly the reasons why wave theory of light is not able to explain the observed features in photoelectric effect.

Threshold Frequency: The minimum frequency of incident light which is just capable of ejecting electrons from a metal. It is denoted by vo.

Stopping Potential: The minimum retarding potential applied to anode of a photoelectric tube which is just capable of stopping photoelectric current.

The observed characteristics of photoelectric effect could not be explained on the basis of wave theory of light due to the following reasons.

(iii) According to wave theory, the energy transferred by light waves will not go to a particular electron, but it will be distributed uniformly to all electrons present in the illuminated surface.

Therefore, electrons will take some time to collect the necessary energy for their emission.

The time for emission will be more for light of less intensity and vice versa. But experimental observations show that the emission of electrons take place instantaneously after the light is incident on the metal irrespective of the intensity of the light.

Question 17: Identify the type of waves which are produced by the following way and write one application for each:

(i) Radioactive decay of the nucleus,

(ii) Rapid acceleration and decelerations of electrons in aerials,

Question: Sunita and her friends visited an exhibition. The policeman asked them to pass through a metal detector. Sunita’s friends were initially scared of it. Sunita, however, explained to them the purpose and working of the metal detector.

(a) On what principle does a metal detector work?

(b) Why does the detector emit sound when a person carrying any metallic object walks through it?

(c) State some qualities which Sunita displayed while explaining the purpose of walking through the detector.

(a) Metal detector works on the principle of resonance in AC circuits.

(b) When a person walks through the gate of a metal detector, the impedance of the circuit changes, resulting in significant change in current in the circuit that causes a sound to be emitted as an alarm.

(c) Some of the qualities are: Responsible citizen, knowledgeable person.