In Part-I you got acquainted with the haloalkane and haloarenes, their preparation, their physical and chemical properties, stereoisomerism, etc. In Part-II, you will get to know various important polyhalogeno compounds along with their preparation, properties and uses. These quick notes are prepared strictly according to the latest CBSE syllabus for Class 12th Chemistry.

Some important polyhalogen compounds are described below:

Dichloromethane is prepared by the direct chlorination of CH4.

•    It is a colourless, sweet-smelling, volatile liquid

•    It has a low boiling point and low inflammability.

•    It is widely used as a paint remover

•    It is used as a solvent and cleaning agent in chemical manufacture, textiles, electronics, metals and plastic industries

CHCl3 is manufactured by chlorination of methane followed by separation by fractional distillation.

•    Chloroform is a sweet - smelling liquid

To avoid this oxidation chiorofrom is always stored in dark coloured bottles filled to the brim to exclude any air. Further bottles are also filled with small amount of ethyl alcohol so as to destroy traces of phosgene if formed, to harmless diethyl carbonate.

Some important chemical reactions of chloroform are: 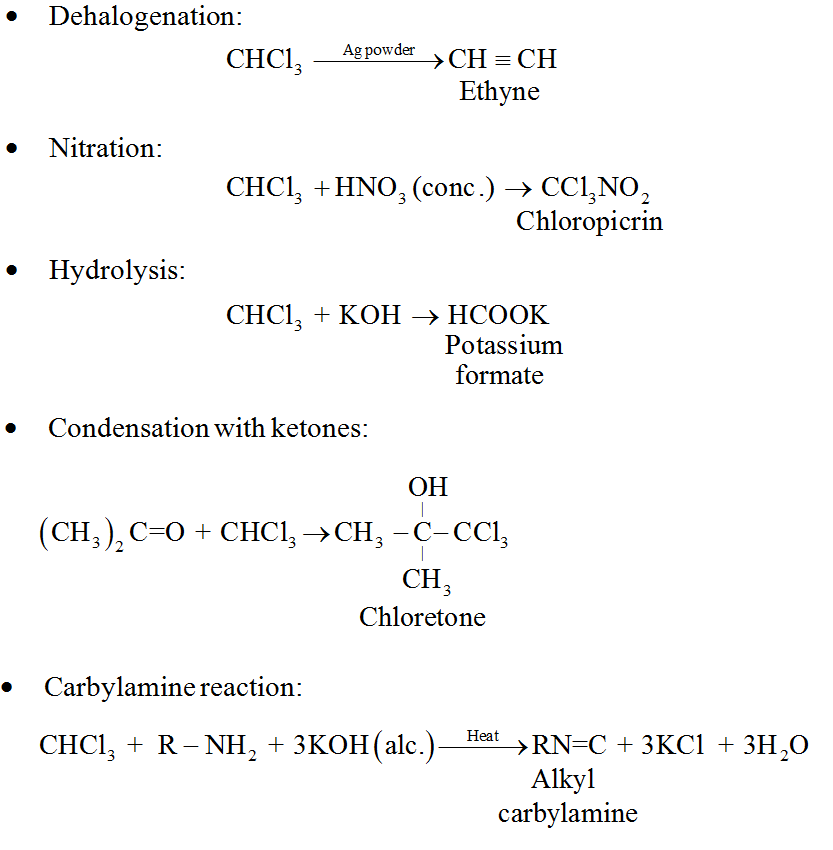 •    Chloroform is employed as a solvent for fats, alkaloids, iodine and other substances.

•    It mainly used in the production of the freon refrigerant R-22.

Any compound containing CH3CO− or CH3CH(OH)− group, when heated with iodine and aquous NaOH gives yellow precipitate of iodoform.The reaction is known as iodoforin reaction.

Iodoform was used earlier as an antiseptic due to the liberation of free iodine but due to its objectionable smell, it has been replaced by other formulations containing iodine.

CCl4 is prepared by reacting carbon disulphide (CS2) with Cl2 in the presence of AlCl3.

•    When heated with steam at 773 K, it undergoes oxidation to form phosgene, COCl2 gas.

•     Carbon tetrachloride is used as a solvent for oils, fats, resins

•     It is used as a refrigerant and a dry cleaning agent

•     It is used as a fire extinguisher under the name pyrene

Note: When carbon tetrachloride is released into the air, it causes the atmospheric temperature to rise and depletion of ozone layer. Depletion of the ozone layer is believed to increase human exposure to ultraviolet rays, leading to increased skin cancer, eye diseases and disorders, and possible disruption of the immune system.

Freons are the chlorofluoro compounds of methane and ethane.

•    They lead to the depletion of ozone layer surrounding our planet

It is also famous by its trade name, gammaxene or lindane

It is prepared by reacting benzene with chlorine in the presence of sunlight.

BHC is mainly sused as a pesticide in agriculture.

It is manufactured by the condensation of chloral with chlorobenzene in the presence of H2SO4.

•    DDT is a white powder insoluble in water.

•    It is a highly stable fat-soluble compound.

•    It is mainly used as an insecticide.