•    Reactivity of group 15 elements towards:

ns2 np3, are known as the nitrogen family. The s-orbital in these elements is completely filled and p-orbitals are half-filled, making their electronic configuration extra stable.

Nitrogen has unique ability to form pπ ‒ pπ multiple bonds with itself and with other elements having small size and high electronegativity (e.g., C, O). Thus nitrogen exists as diatomc molecule, N2 with a triple bond between the two atoms. However, P cannot pπ ‒ pπ from  bond, therefore P exists as  P4 ‒ P4 is highly strained and is chemically reactive while N2 is chemically inert.

The behaviour of nitrogen differs from rest of the elements due to the following reasons:

(ii) It does not have d – orbitals

(iii) It has high electronegativity

(iv) It has high ionization enthalpy

All the elements of Group 15 form trihydrides, MH3 having sp3 type hybridization.

Bond angle: Electronegativity of N is highest. Therefore, the lone pairs will be towards nitrogen and hence more repulsion between bond pairs. Therefore bond angle is the highest. After nitrogen, the electronegativity decreases down the group.

Basicity: Basicity decreases down the group.

Reactivity towards oxygen: All the group 15 elements form two types of oxides: trioxides, M2O3 and pentaoxides, M2O5. The oxide in the higher oxidation state of the element is more acidic than that of lower oxidation state. Their acidic character decreases down the group.

Reactivity towards halogens: Group 15 elements react to form two series of halides: trihalides, MX3 and pentahalides, MX5. Trihalides are sp3 hybridised with pyramidal shape whereas pentahalides are sp3d hybridized with trigonal bipyramidal shape. Nitrogen does not form pentahalide due to non-availability of the d- orbitals in its valence shell. All the trihalides of these elements except those of nitrogen are stable. In case of nitrogen, only NF3 is known to be stable.

Reactivity towards metals: All the group 15 elements react with metals to form binary compounds in –3 oxidation state.

Preparation: N2 is produced commercially by the liquifaction of air followed by fractional distillation.

Liquid N2 distills out first leaving behind liquid oxygen. In the laboratory, dinitrogen is prepared by treating an aqueous solution of ammonium chloride with sodium nitrite.

Small amounts of NO and HNO3 formed as impurities can be removed by passing the gas through aqueous H2SO4 containing K2Cr2O7.

Properties: Dinitrogen is a colourless, odourless gas, tasteless and non-toxic gas. It is chemically inert at room temperature due to the presence of triple bond with high bond dissociation energy.

Uses: Some important uses of dinitrogen are as follows:

(i) Liquid N2 is used as a refrigerant

(iii) It is used in the manufacture of HNO3 and NH3.

Ammonia molecule is trigonal pyramidal with nitrogen atom at the apex. It has 3 bond pairs and 1 lone pair. N is sp3 hybridised.

Preparation: Ammonia (NH3) is manufactured on the commercial scale by Haber's process.

In laboratory, ammonia is prepared by reacting NH4Cl with NaOH.

Properties: Due to the presence of the lone pair of electrons on the nitrogen atoms, NH3 is a Lewis base. It can form coordinate covalent bond with the transition metal ion and form complexes, e.g.

The following table gives the brief information of various oxides of nitrogen: 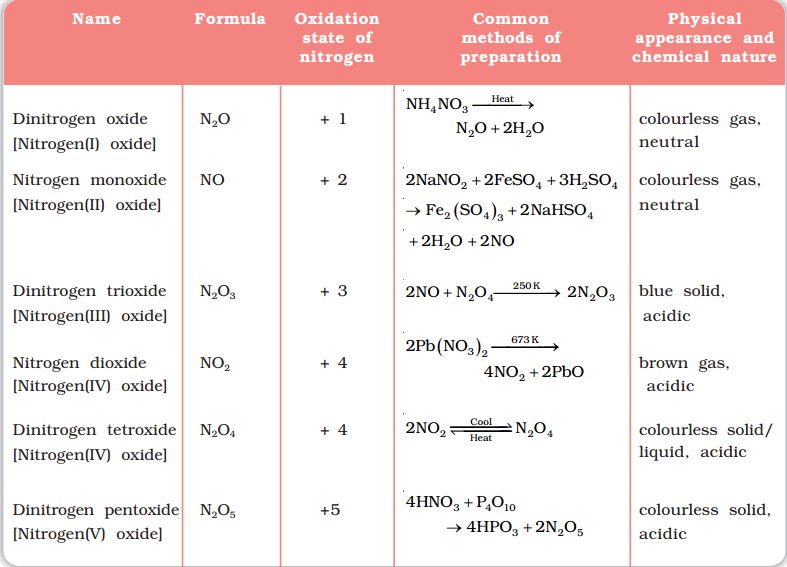 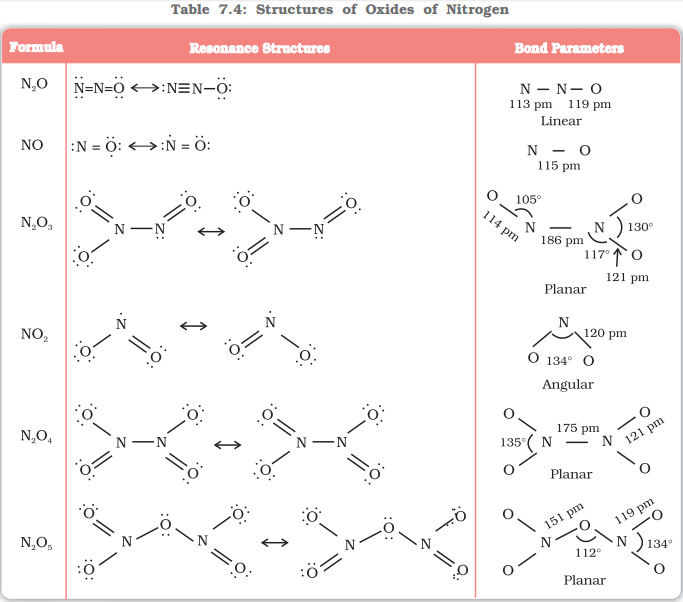 Nitric acid is the most important oxoacid formed by nitrogen. It is a colourless liquid. In the gaseous state, HNO3 exists as a planar molecule with the structure as shown below:

Preparation: Nitric acid is manufactured by the catalytic oxidation of ammonia in Ostwald process.

Properties: Concentrated HNO3 is a strong oxidising agent and attacks most metals except noble metals. Cr, Fe and AI do not dissolve in conc. HNO3  due to the formation of a passive film of oxide on the surface.

Brown ring test for the detection of nitrates:

Uses: Some important uses of nitric acid are:

(i) HNO3 is used in the manufacture of fertilisers.

(ii) It is used in the formation of explosives, dynamites, TNT, etc.

(iii) It is also used in the etching of metals.

Phosphorus is an essential constituent of elements and plants. It has many allotropic forms, the important ones are:

• Highly toxic and can ignite when exposed to air.

• Prepared by heating white phosphorus at 573K in an inert atmosphere

• Odourless, nonpoisonous and insoluble in H2O

• Polymeric structure consisting of chains of P4 units linked together

• Prepared by heating white phosphorus at 473 K under high pressure.

• Has an opaque monoclinic or rhombohedral crystals

Uses: Some important uses of phosphorus are:

(i) Used in the manufacture of fertilisers and food grade phosphates.

(ii) Elemental P is used the manufacture of organo-phosphorus compounds used as pesticides.

Phosphine is a highly poisonous, colourless gas and has a smell of rotten fish.

Preparation: Phosphine is prepared by the reaction of calcium phosphide with water or dilute HCl.

Properties: It is insoluble in water and is a weaker base than ammonia. Like ammonia, it gives phosphonium compounds with acids.

PH3 is non-inflammable when pure but becomes inflammable owing to the presence of P2H4 or P4 vapours.

In water, PH3 decomposes in the presence of light to give red phosphorus and H2.

It is a colourless oily liquid.

Properties: It has a pyramidal shape, in which phosphorus is sp3 hybridised.

It gets hydrolysed in the presence of moisture. 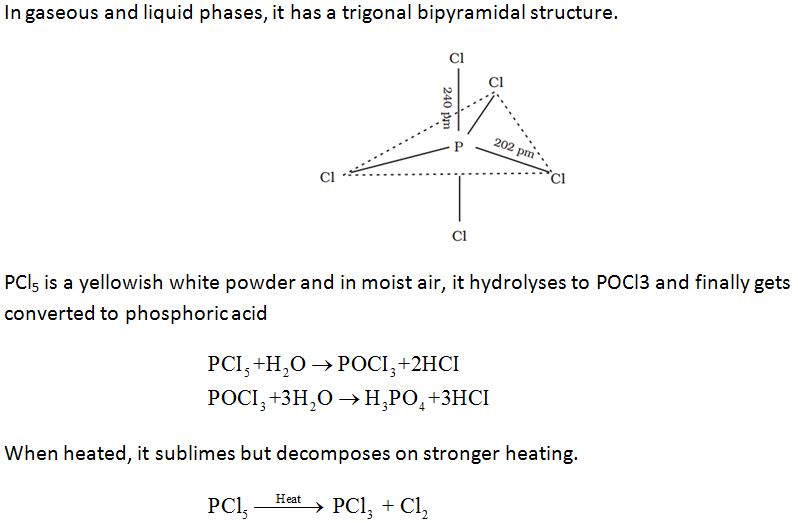 The following table gives the brief information of various oxides of nitrogen: