In this article, you will get important notes on CBSE Class 12th Chemistry, Chapter 7: The p-Block elements.  We have already studied most of the important topics of this chapter in Part – I and Part – II. Now in this part – III we will study about Group 17 and Group 18 elements.

In this article you will get revision notes on CBSE Class 12th Chemistry, Chapter 7- The p-Block Elements. This article is a continuation of the revision notes on Class 12 Chemistry : Chapter- The p-Block Elements, Part-I and Part-II. In Part-I and Part-II we have studied about the Group 15 elements (Nitrogen family) and Group 16 elements respectively. In Part-III, you will get acquainted with Group 17 and Group 18 elements. These notes are based on the latest CBSE syllabus for Class 12th Chemistry.

•    Reactivity of halogens towards:

Group 17 elements are fluorine (F), chlorine (Cl), bromine (Br), iodine (I) and astatine (At) are collectively known as halogens and are having the general electronic configuration of ns2, np5.

The halogens have the smallest atomic radii in their respective periods due to maximum effective nuclear charge. Atomic and ionic radii increases down the group due to the addition of a new shell at each step.

Due to their small size halogens have little tendency to lose electron. Thus they have very high ionisation enthalpy. Ionisation enthalpy decreases down the group due to the increase in atomic size.

Electronegativity decreases down the group. F is the most electronegative element in the periodic table.

The melting and boiling points increases down the group.

Bond dissociation enthalpy decreases as we move down the group. F2 has less ΔHdiss. Then Cl2 due to small size and strong lone pair-lone pair repulsion.

All halogens exhibit colour due to the absorption of radiations in visible region of light due to which the electrons get excited to higher energy levels.

For example, F2 has yellow, Cl2  has greenish yellow, Br2 has red and I2 has violet colour.

All halogens are highly reactive and the reactivity decreases down the group.

Fluorine is anomalous in many properties like, ionisation enthalpy, electronegativity, enthalpy of bond dissociation that are higher than expected from the regular trends among the halogens. Its  ionic and covalent radii, melting and boiling points,  and electron gain enthalpy is quite lower than expected.
Reasons for the anomalous behaviour of oxygen are:

As the bond dissociation enthalpy decreases down the group so the stability of hydrogen halides also decreases from HF to HI.

As the bond dissociation enthalpy decreases, so it becomes easier to give out the hydrogen atom causing the reducing power to increase from HF to HI.

Halogens react with metals to form metal halides of the form MX, where  M is a monovalent metal.

Reactivity of halogens towards other halogens (Interhalogens):

Some properties of interhalogen compounds are given in the following table: 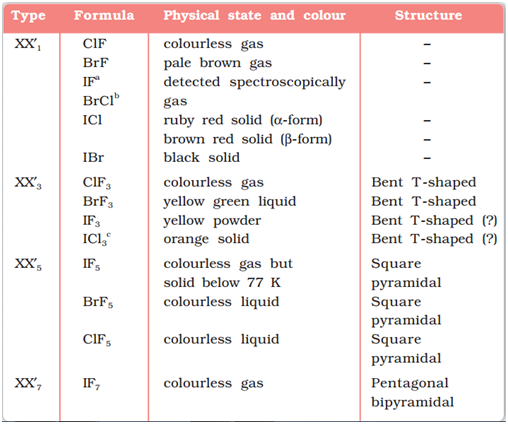 Chlorine can be prepared by any of the following processes:

•     It is a greenish yellow gas with pungent and suffocating odour.

•     Reaction with ammonia: When treated with excess ammonia, chlorine gives nitrogen and ammonium chloride whereas when excess chlorine reacts with ammonia, nitrogen trichloride is formed.

Cl2 acts as a powerful bleaching agent and its bleaching action is due to its oxidizing nature.

(i) Chlorine is used for bleaching woodpulp.

(ii) It is used in the extraction of gold and platinum

(iii) It is used in in sterilising drinking water.

(iv) It is used in the manufacture of dyes, drugs and organic compounds like CCl4, DDT, refrigerants, etc.

It is prepared by heating sodium chloride with concentrated sulphuric acid.

HCl is a colourless gas with pungent odour.

3HCl : 1HNO3 is called aqua regia, which is used for dissolving noble metals.

(i) Hydrogen chloride is used in medicine and as a laboratory reagent.

(ii) It is used in the manufacture of chlorine, NH4Cl and glucose.

Fluorine due to its small size and high electronegativity forms only one oxoacid HOF (Hypofluorous acid).

Other halogen form several oxoacids as given in the following table:

Group 18 elements: helium (He), neon (Ne), argon (Ar), krypton (Kr), xenon (Xe) and radon (Rn) having the electronic configuration ns2 np6, are named as noble gases. All these are gases and chemically unreactive.

Atomic radii of noble gases increases down the group due to the addition of a new shell at each step.

Because of stable electronic configuration, noble gases have no tendency to accept the electron and therefore, have large positive values of electron gain enthalpy.

Due to the weak dispersion forces they have low melting and boiling point. 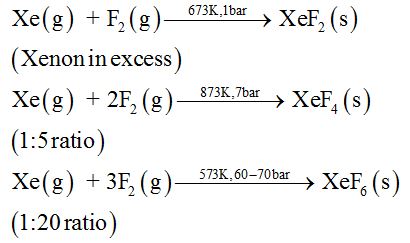 XeF2 is linear, XeF4 is square planar and XeF6 is distorted octahedral.

They are readily hydrolysed

XeO3 is a colourless explosive solid having a trigonal pyramidal structure.

XeOF4 is a colourless volatile liquid with a square pyramidal

•    In filling balloons for meteorological observations.

•    In the oxygen mixture of deep sea divers

•    Used to provide an inert atmosphere in melting and welding of easily oxidizable metals.

•    In discharge tubes and fluorescent bulbs used for advertising purposes

•    In beacon lights for the safety of air navigators as the light can easily pass through the fog for a clear view.

•    In the laboratory for handling substances that are air-sensitive.

•    Xenon and Krypton are also used in light bulbs.