This article is continuation of the revision notes on Class 12 Chemistry : Chapter- The p-Block Elements, Part-I. In Part-I we have studied about the Group 15 elements (Nitrogen family), their important compounds like Dinitrogen, Ammonia, Oxides of Nitrogen, Nitric acid, Phosphine, Phosphorus Halides, etc. Now, in Part-II, we will get acquainted with Group 16 elements.

This article is a continuation of the revision notes on Class 12 Chemistry : Chapter- The p-Block Elements, Part-I.

In Part-I we have studied about the Group 15 elements (Nitrogen family), their important compounds like Dinitrogen, Ammonia, Oxides of Nitrogen, Nitric acid, Phosphine, Phosphorus Halides, etc.

In Part-II, we will get acquainted with Group 16 elements. All the these quick notes are based on the latest CBSE syllabus for Class 12th Chemistry.

•    Reactivity of group 16 elements towards:

•    Preparation, properties and uses of sulphur dioxide (SO2)

The elements of group 15: oxygen (O), sulphur (S), selenium(Se), tellurium (Te) and polonium (Po) having general electronic configuration ns2np4, are known as the oxygen family. All these elements collectively are also known as chalcogens. Polonium is a radioactive element.

Ionisation enthalpy: Due to the increase in size of the atoms the ionisation enthalpy decreases down the group. IE1of group 16 elements is less than the IE1 of group 15. This is because group 15 elements have extrastability due to half-filled p-orbitals.

Oxygen forms strong hydrogen bonding in H2O which is not found in H2S. Also, the maximum covalency of oxygen is four, whereas in a case of other elements of the group, the valence shells can be expanded and covalency exceeds four.

Reasons for the anomalous behaviour of oxygen are:

Reactivity towards hydrogen: All the elements of Group 16 form hydrides of the type H2E (E = S, Se, Te, Po).

Acidic nature: Due to the decreasing bond dissociation enthalpy, acidic character of group 16 elements increases down the group.

Reactivity with halogens: Elements of Group 16 form a large number of halides of the type, EX2 EX4 and EX6, where X is a halogen. The stability of halides decreases in the order F− > Cl− > Br− > I− . This is because E-X bond length increases with increase in size. Among hexa halides, hexafluorides are the most stable because of steric reasons. Dihalides are sp3 hybridised and have tetrahedral geometry. H2O is a liquid while H2S is a gas. Because in water due to the small size and high electronegativity of O, strong hydrogen bonding is present there.

Oxygen is the first element of Group 16 with the electronic configuration of 1s2 2s2 2p4 in the ground state. Oxygen has two allotropes: dioxygen  (O2) and trioxygen or ozone (O3).

Oxygen usually exists in the form of dioxygen.

Dioxygen is prepared in the laboratory by thermal decompositions of oxygen rich compounds such as KClO3,

(i) Oxygen is a colourless, odourless and is a highly reactive tasteless gas.

(ii) Due to the presence of pπ‒ pπ bonding, O2 is a discrete molecule and intermolecular forces are weak van der Waals forces, hence, O2 is a gas.

(i) Dioxygen is used in making steel.

(ii) It is used in the production of oxygen containing organic chemicals.

(iv) It is used as an oxidiser in underwater diving and in space shuttles.

Oxygen combines with majority of the elements of the periodic table to forms oxides (O2‒). There are three types of oxides:

(i) Acidic oxides: Oxides of non- metals are usually acidic in nature. For example, SO2 combines with water to give H2SO3, an acid.

Ozone is an allotropic form of oxygen. Ozone has angular structure with a bond angle of about 117o. Both O = O bonds are of equal bond length due to resonance.

It is formed when dioxygen is irradiated with UV light or silent electric discharge.

(i) Ozone is a pale blue gas with a characteristic pungent odour.

(ii) Ozone is diamagnetic in nature.

Sulphur exhibits allotropy, two important allotropes of which are:

The molecule of SO2 is angular. It is a resonance hybrid of the two canonical forms:

Sulphur dioxide is formed together with a little (6-8%) sulphur trioxide when sulphur is burnt in air or oxygen:

In the laboratory it is readily generated by treating a sulphite with dilute sulphuric acid. 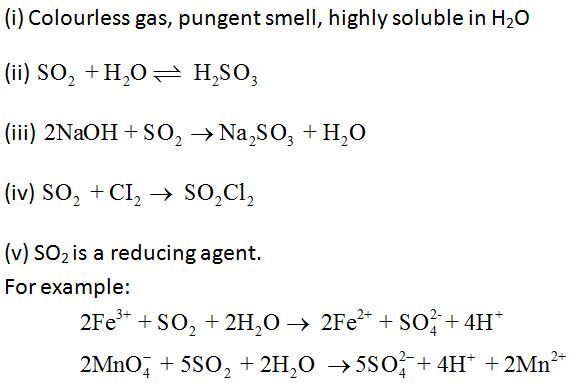 (i) SO2  is used in refining petroleum and sugar

(ii) It is used in bleaching wool and silk

(iii) It is also used as a disinfectant and preservative.

Sulphur forms variety of oxoacids. All oxoacids of sulphur are dibasic.

Sulphur forms a number of oxoacids such as H2SO3, H2S2O3, H2S2O4, H2S2O5, H2SxO6 (x = 2 to 5), H2SO4, H2S2O7, H2SO5, H2S2O8 . Some of these acids are unstable and cannot be isolated. They are known in aqueous solution or in the form of their salts. Structures of some important oxoacids are shown in figure given below

Sulphuric acid is manufactured by the Contact Process as follows:

(i) Sulphuric acid is a colourless, dense oily liquid.

(ii) It is dibasic acid or diprotic acid.

(iii) It is a strong dehydrating agent.

(iv) It is a moderately strong oxidizing agent.

(i) H2SO4 is used in manufacture of fertilisers