The Union Finance Minister Arun Jaitley presented the Union Budget 2016-17 in the Lok Sabha today on 29 February 2016. The NDA government, after coming to power in the year 2014, has presented its second full year budget. 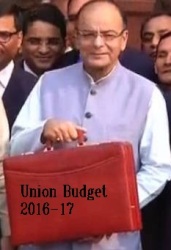 The Union Finance Minister Arun Jaitley presented the Union Budget 2016-17 in the Lok Sabha today on 29 February 2016. The NDA government, after coming to power in the year 2014, has presented its second full year budget. This is the third ever budget presented by Arun Jaitley in the Lok Sabha, where major financial decisions and budgetary allocations were made for different programmes.

Giving cheers to the education sector, the budget of this year announced that 10 public and 10 private educational institutes in the country will be made world-class this year. For financing the higher education , government will allot another Rs. 1000 crore. This money will go into various higher education institutes in India. The Finance Minister also said that the digital repository for all the diplomas and school leaving certificates will be created by the government. Pondering over school education, he said there will be 62 new Navodaya Vidaylayas built around the country to provide quality education to the future scholars.

Looking ahead, the finance minister Arun Jaitley also declared that under PM Kaushal Vikas Yojna scheme, one crore youth will get objective skills building training, in the next three years. 1500 multi-sill development centres will be opened around the country, which will lend skills to the thousands of youth wondering for job opportunities. He read out, that so far National Skill Development Mission has trained 76 lakh young aspirants in the country, and it is still rising. In order to build the proposed 1500 multi-skill training institutes, the government has allotted Rs. 1700 crore for the year 2016-17.