Agriculture Schemes are the need of the Indian Economy to sustain the Irrigation schemes in Monsoon based Agriculture in India.

Agriculture schemes are always required for two reasons. Firstly to maintain the agriculture growth and secondly to provide a consistent employment to the rural population . India is primarily an agricultural economy, because more than 50 percent of its population still involves itself in agriculture and allied activities. Further, agriculture contributes around 14% to GDP of India. With these facts, we can easily understand the importance of agriculture and its contribution to Indian economy. But, agriculture has largely stagnated and scope for expansion is limited, hence the focus should be on how to improve agricultural production and productivity. One such focus area is irrigation where state intervention is required, irrigation has direct bearing on improved production and productivity as our agriculture profile is largely monsoon dependent or rain fed. Realizing the same launch of PMKSY is a move in right direction. 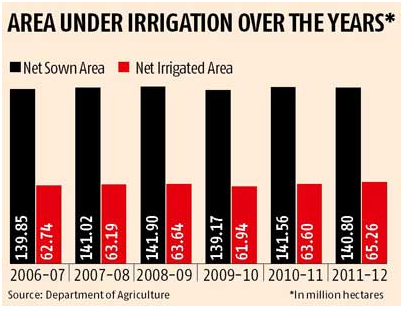 The major Objectives of PMKSY are:-

Under PMKSY the priority is accorded to conserving water, its management and also to expand the coverage of irrigation, which is aptly said as ‘Har Khet  Ko Pani’. Water use efficiency is also of particular focus of the scheme i.e. ‘More crop per drop’

II.The nodal agencies for implementation of the scheme are Ministries of Agriculture, Water Resources and Rural Development dealing with their own sub-components. Like, Ministry of Rural Development is primarily concerned with rainwater conservation, construction of farm pond, water harvesting structures, small check dams and contour bunding etc.

The Min of Water Resources will concern itself with measures for creation of irrigation sources. Like, construction of diversion canals, field channels, water diversion/lift irrigation, including development of water distribution systems.
Ministry of Agriculture will promote water efficiency and precision farming devices like drips, sprinklers, pivots, rain-guns in the farm; it will also look after construction of micro-irrigation structures to supplement source creation activities.

III.The execution of PMKSY will be done in a decentralized manner with State level planning and project specific implementation. Hence, state can draw their own plans, basing them upon District Irrigation Plan (DIP) and State Irrigation Plan (SIP), and also according to their needs. It will club all water sector related activities and provide a common platform, including drinking water & sanitation, MGNREGA etc. this all will done through a comprehensive plan. State Level Sanctioning Committee (SLSC) is vested with the power to oversee its implementation.

IV.All States including North Eastern States and Union Territories are covered under the programme.

The PMKSY will start with investment of 5,300 Crores for this fiscal. The total outlay of Rs.50000 Crores is for a period of 5 years (2015-16 to 2019-20) and is to achieve convergence of investments in irrigation at the field level. Definitely, the outlay for this fiscal is not enough to cover the remaining 65% of rain fed area, but the government has targeted to:

With above two targets, the PMKSY will also focus on end-to-end irrigation and micro-irrigation as well. Apart from working on new irrigation facilities, the PMKSY also aims towards fixing the poorly implemented projects already in place. Thus, PMKSY will take control of these projects and:

•    Rework on them with strict guidelines of quality control.
•    Complete 1,300 incomplete watershed projects.

Indian Monsoon and the PMKSY

Of the total cultivable land, only 35% is well irrigated. The remaining 65% is solely rain fed, therefore delayed or low rainfall both play havoc on these farmers. Either of these two conditions is catastrophic as these results into crop failure, which contributes to slow down in economy, and the farmer is obviously the worst hit. A combination of factors—neglect of investments in agriculture, three consequent droughts during sowing season, followed by unseasonal rains, has created a situation of rural distress. The farmers primarily depend on the south-west monsoon for growing Kharif crops such as paddy, pulses, oilseeds and cotton.

The Indian agriculture has largely stagnated and to revive its growth PMKSY is a good start. PMKSY would double the central budget for irrigation; hence will help in drought proofing the agriculture, building resilience of the farmer and substantially increasing the crop productivity. PMKSY is a long-term solution to unpredictable rainfall pattern and is particularly important in the backdrop of climate change.

PMKSY and the Watershed Area of India

The watershed development projects focus on developing wastelands/degraded lands, drought-prone and desert areas on watershed basis. These projects also focus on mitigating the adverse effects of extreme climatic conditions such as drought and desertification on crops.

The idea of watershed development is in coherence with the objective of PMKSY as both provide sustainable solutions for long term.

Realizing this, watershed development is made the key component of PMKSY, hence one of the objectives of the programme is to “Ensure the integrated development of rain fed areas using the watershed approach towards soil and water conservation, regeneration of ground water, arresting runoff, providing livelihood options and other NRM activities.” The integrated watershed management programme has been amalgamated with PMKSY in pursuance of the above objective.

The idea of PMFBY is to protect the farmer from the losses occurring due to unprecedented weather conditions, provide him with the short term relief, save him from unprecedented volatility in the farm output and stop him from abandoning agriculture, this would also encourage him keep on investing more on inputs and crop protection techniques. On the other hand, PMKSY is a long term solution for dealing with agrarian distress in the country, as its objective is to expand irrigation which would reduce the dependence of the farmer on monsoon thereby insulating him from the vagaries of nature. Both of these schemes would provide a robust cushion to the farmer and would complement each other providing the farmer with necessary short-term relief in the form of compensation for crop loss and a sustainable long-term solution in the form of irrigation thereby reducing his dependence on monsoon.