If you are appearing for CBSE Class 12th Board exams 2020, check this list of important questions and answers from Chapter 2 of Microeconomics.

CBSE Class 12th Economic exam is scheduled for 13th March 2020. In this article we have complied a list of important questions from Chapter 2 of Part A (Microeconomics): Theory of Consumer Behaviour. Questions given below are important questions and are expected to be asked in Class 12 Economics board exam 2019-20.

Ques 1 A rational consumer is consuming only two goods, Good X and Good Y with < 4 and < 5 as their respective prices. Her total money income is < 40. Answer the following questions, based on the given information :

(b) What would be the slope of the budget line ?

Ques 2 A rational consumer is consuming only two goods, Good X and

Good Y. The prices of the goods are < 20 and < 10 respectively. Her total money income is < 200. Answer the following questions, using the given information :

(i) State her Budget line equation.

(ii) State the slope of the Budget line of the consumer.

(iii) If she decides to spend her entire income on Good Y, how

many units of Good Y can she buy ?

iii) If the entire income is spent on Good Y Qx is zero;

Diminishing Marginal Rate of Substitution implies that a consumer is willing to sacrifice lesser unitsof Good Y for every additional unit of Good X. As given in the schedule, moving from combination B to C the consumer is willing to give up 2 units of Good Y so as to gain an additional unit of Good X(2Y:1X), which diminishes to 1Y:1X in combination D

Ques 4 ‘‘For a consumer to be in equilibrium position, marginal rate of substitution between the two goods must be equal to ratio of prices of  the two goods.’’ Do you agree with the given statement ? Justify your answer.

Solution: The given partially statement is true. As the consumer will get stable equilibrium only when the following two conditions are satisfied:

If MRS XY > (Px/Py). consumer is willing to pay more for commodity X than the price preventing in the market It will induce him to purchase more of X less of Good Y, which leads to decline of MRS. This will continue until MRS XY = Px/Py vice – versa.

Ques 5 Distinguish between normal goods and inferior goods, with examples.

Solution: Normal Goods are those Goods whose demand tends to increase with an

Inferior Goods are those goods whose demand decreases with an increase in the income of a consumer. The demand for the inferior goods is inversely related to the income of a consumer. For example – with an increase in income, more generally, a consumer would like to shift to a smart phone from a simple mobile phone he is using at present. Now, the simple mobile phone is an inferior good for him whereas, the smart phone is a normal good.

Ques 6 Distinguish between substitute goods and complementary goods, with examples.

Solution: Substitute Goods- those goods which can be used in place of each other to satisfy the same want, examples: Coke and Pepsi.

Complementary Goods – Complementary goods is a pair of goods which are jointly demanded for the satisfaction of wants, for example: petrol car and petrol.

Solution: The Law of Equi-marginal utility is an extension of the Law of Diminishing Marginal Utility. The consumer may expect to get maximum utility by allocating the income among various goods in such a way that last rupee spent on each good yields the same Marginal Utility. In other words, the law states that the consumer will get maximum satisfaction if the marginal utility of the last rupee of expenditure on each good is the same.

(a) Movement along the same indifference curve.

(b) Shift from a lower to a higher indifference curve.

b) A consumer will shift from a lower indifference curve to a higher indifference curve when he wants to have a new bundle of two goods, which has more quantity of at least one good and no less of the other good (monotonic preference). Alternatively, the new bundle may offer more quantity of both the goods, thereby providing the consumer greater level of satisfaction.

(a) Convexity to origin

(b) Downward sloping from left to right

Solution: An Indifference curve is convex to the origin due to Diminishing Marginal  Rate of Substitution(Δy/Δx) 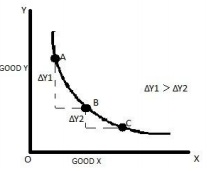 In the above diagram the consumer is willing to sacrifice lesser and lesser units of good Y to gain one additional units of good X. 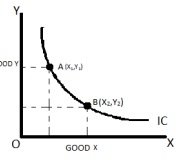 This property signifies that to remain on the same level of satisfaction the consumer must forego units of one good if he wishes to consume more units of the other good.