f you are appearing for CBSE Class 12th Board exams 2020, check this list of important questions and answers from Chapter 3 of Microeconomics.

CBSE Class 12th Economic exam is scheduled for 13th March 2020. In this article we have complied a list of important questions from Chapter 3 of Part A (Microeconomics): Production and Costs. Questions given below are important questions and are expected to be asked in Class 12 Economics board exam 2019-20.

Ques 1 Which of the following statements are true or false ? Give valid reasons  in support of your answer.

(c) Under all market conditions, Average revenue and Marginal revenue are equal to each other.

Solution: a) The given statement is false. Average Cost curve is the vertical summation of Average Variable Cost and Average Fixed Cost(AC = AFC + AVC). Since, Average Fixed Cost cannot be zero (AFC ≠ 0) the two curves would never touch each other.

d) The given statement is true. The difference of the two is represented by Total Fixed Cost (TFC). TFC remains constant at all levels of output. It represents the vertical distance between the two curves making them parallel to each other.

Ques 2 The marginal product curve in the input-output plane, looks like ____________ : (Choose the correct alternative)

(b) an inverse ‘U’ shaped curve

Solution: b) an inverse ‘U’ shaped curve

Ques 3 The average product curve in the input-output plane, will be __________. (Choose the correct alternative)

(b) an inverse ‘S’ shaped curve

(d) an inverse ‘U’ shaped curve

Ques 4 Which of the following formula is correct for calculating marginal cost ? (Choose the correct alternative)

Solution: above (higher/ greater than/ more than )

(a) is a straight line parallel to X-axis.

(b) is straight line parallel to Y-axis.

Ques 10 Explain the relation between Average Cost (AC) curve and

Solution: i) When MC < AC, AC decreases (this happens up to Q2 level of output)

ii) When MC = AC, AC is constant and at its minimum(at Q2 level of output) 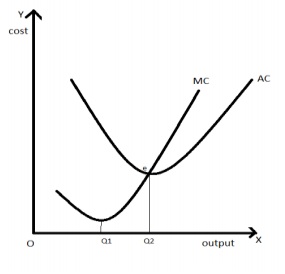