Ubagarampillai Sagayam, an IAS officer who set his goals to make Tamil Nadu, a corruption and mafia free state in India can be inspirational for IAS aspirants.

Ubagarampillai Sagayam commonly known as U. Sagayam is a civil servant in the state of Tamil Nadu in southern India. U. Sagayam is a son of a farmer from Perunchunai village, Pudukkottai, Tamil Nadu known for his amazing efforts to crack down the corruption and illegal activities in the state. Recently, the bureaucrat with a reputation for incorruptibility and honesty, is once again in the news after he approached the Madras High Court last week, complaining of threats to his life from the granite mining lobby in the State.

U. Sagayam had passed the UPSC civil service examination but was not able to get an officer rank in the Indian Administrative Service (IAS). He also cracked the Tamil Nadu Public Service Commission exam through this he got a chance to join the IAS in 1991 as a sub-divisional magistrate of the city of Ootacamund (Ooty). He came to the limelight when he accused the district collector of favouritism toward the operators of large tea estates. Since then, he decided to fight against corruption and illegal activities which have led to his being transferred more than 20 times in his two decades of public service but his perseverance against corruption never faded away.

Here is the list of his exceptional efforts against corruption and illegal activities which make him different from other co-officers:

As an additional district magistrate in Kanchipuram in 2000, Sagayam sealed the Pepsi’s bottling plant near Chennai, after spotting dirt floating in several bottles of their soft drinks, refusing to budge under external pressure and sealed the whole plant.

In 2004, then he was the Deputy Commissioner of Civil Supplies in Chennai investigated and found the restaurants in Chennai were using gas cylinders illegally which a huge loss to the public exchequer.

Submitted a 13-page report to Tamil Nadu Government regarding illegal granite quarrying in Madurai in which state had lost Rs. 16,000 crore

In 2012, Sangayam has started his investigation on the basis of an anonymous petition and he was completely dismayed about the ongoing irregularities in granite mining.
As the District Collector, Sagayam toured quarries and interviewed workers to establish that illegal quarrying was going on amid legitimate mining and that some companies were indulging in stealing granite from neighbouring sites or quarrying more than they had been allowed to mine. The impacts of the report led 28 cases of illegal granite quarrying have been registered against 15 firms, and about 30 of the accused are big-business mining barons.

After submitting 13-page report was received a letter of his 19th transfer to the post of Managing Director of the Tamil Nadu Handloom Cooperative.

Spent a night in a graveyard to protect evidence

In 2014, the Tamil Nadu High Court appointed Sagayam to probe a multi-crore granite scam in Madurai. After refused by the local police to exhume bodies of victims who were allegedly buried in the graveyard after a ‘human sacrifice’ performed by a granite quarry operator, he decided to spend the night at the graveyard himself so that the evidence would not be tampered with. 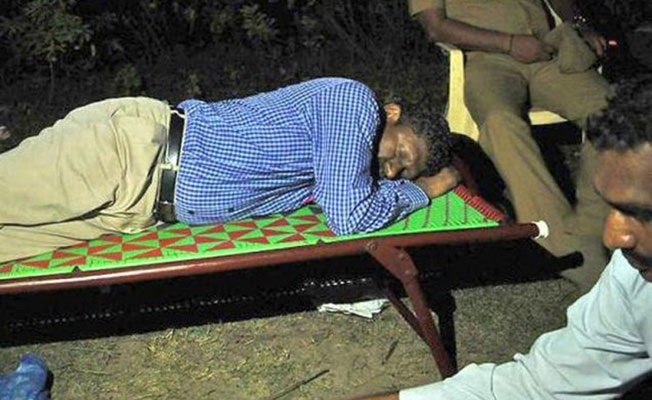 Over 5000 villagers protested against one of his transfers, forcing its withdrawal

Sagayam put his effort to reform and eradicate the ongoing malpractices in the Village Administrative Officers (VAOs) in Namakkal.  He found that the VAOs, who were supposed to supervise the villages, were living in the cities far away from the villages. On knowing the fact, the VAOs and local politicians sought for his transfer but 5000 villagers protest against his transfer and forcing the withdrawal of the transfer orders.

Sagayam credits his honesty to his mother who taught him the ‘honesty is the best policy’. Honesty is not a concept or theory that taught in an institution; in fact, it is an attribute of every individual which can be flourished if an individual doesn’t have the greed of materialistic things. For an IAS Officer, his services for the common people and the honour he gets from common people during delivering his services should be a primary objective of his career.

India is a country where a lot of dedicated government officials like U. Sagayam are in need to fight against the malpractices involved in every system which affects the mass of the country. Hope, such inspiring stories of our civil servants will help the individuals who are in the process of becoming a civil servant in the country. All the Best.