As per the recent news, J&K Government proposed to set up the campus of Indian Institute of Management (IIM) at Narkura in Central Kashmir’s Budgam district. In this direction the State authorities have identified 800 kanals of state land at Narkura Budgam for establishing the institution in Kashmir.

Officials also mentioned that “We zeroed in on the site because Government of India had told the State Government that land for the campus should be within 30 kilometers from the nearest airport. The site is also in vicinity of Srinagar.” 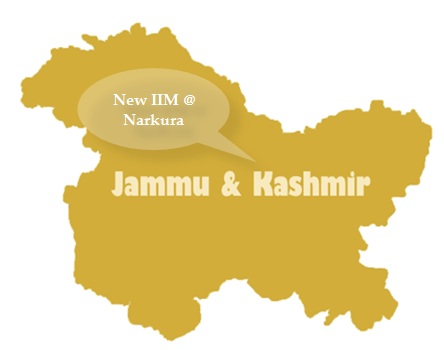 While confirming this news, Minister for Education, Jammu and Kashmir, Syed Altaf Bukhari said they have identified land at Narkura Budgam for establishing the campus. He added that “We have offered this site (for setting up the campus). The Union Ministry of Human Resources would take a final call on the matter after inspecting the site.”

He also told that the Centre would shortly send a team to the shortlisted location to conduct a site-survey of the campus. In October last year, the Government of India had cleared setting up of an IIM in Jammu and an off-site campus in Kashmir.

Setting up of IIM in J&K is part of the Rs 80000 crore development package that was unveiled by the Prime Minister Narendra Modi in 2015 for infrastructure development of the State. Under the package, Rs 1000 crore central assistance has been kept for establishment of IIM Jammu with out-campus in Kashmir. Officials have also disclosed that the idea of establishing campus of IIM in Kashmir was exchanged with the GOI before finalization of the package in 2015.

In 2015-16 Union budget, Finance Minister Arun Jaitley announced setting up of an All India Institute of Medical Sciences (AIIMS) and IIM in the State. While Jammu walked away with IIM, the government’s decision to establish AIIMS in Kashmir triggered protests in Jammu. This prompted the GOI to sanction another AIIMS for Jammu.

For more UPDATES on MBA NEWS, please subscribe with us and receive latest news about top MBA colleges and exams.