Download free NCERT solutions for Class 10 Social Science Civics Chapter 7 - Outcomes of Democracy. All the answers in these NCERT Solutions are designed as per the CBSE marking scheme. Read these exclusive solutions to score good marks in your Board Exams. 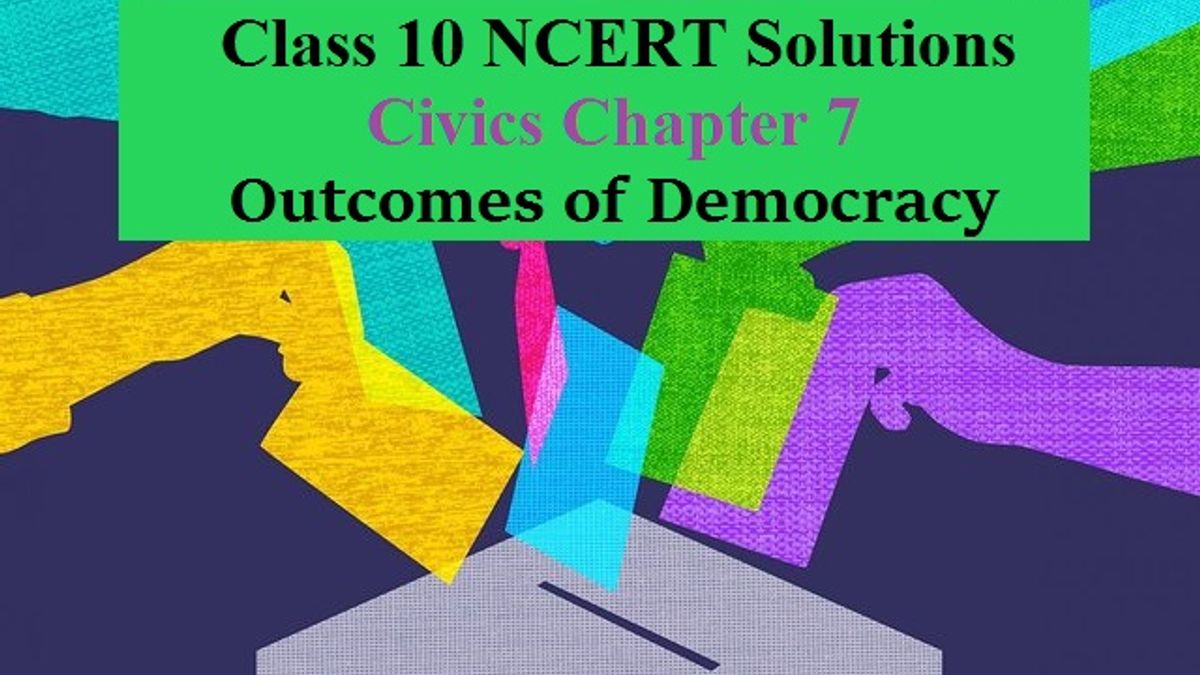 Get here the NCERT Solutions for Class 10 Social Science Democratic Politics Chapter 7 - Outcomes of Democracy. All the answers have been structured in the form of pointers or paragraphs that will make it easy for students to learn these answers. All the NCERT solutions are available here in a readable and downloadable format. Students must go through these NCERT solutions to improve in the subject and score good marks in their board exams.

Check below the NCERT Solutions for Class 10 Civics Chapter 7:

1. How does democracy produce an accountable, responsive and legitimate government?

Democracy produces an accountable, responsive and legitimate government in the following ways:

2. What are the conditions under which democracies accommodate social diversities?

Democracies accommodate social diversities as democracy is not just the rule of the majority. In democratic countries, both the majority and minority work together to achieve progress and development of the nation. It is also necessary that rule by majority does not become rule by majority community in terms of religion or race or linguistic group, etc. Any person or group may become a majority in a democracy.

3. Give arguments to support or oppose the following assertions:

(i) Industrialised countries can afford democracy but the poor need dictatorship to become rich.

(iii) The government in poor countries should spend less on poverty reduction, health, education and spend more on industries and infrastructure.

(iv) In a democracy, all citizens have one vote, which means that there is an absence of any domination and conflict.

(i) This is a wrong statement as there is no relationship between democracy and industrial growth of a nation. The economic development of the nation is dependent upon the resources, policies and the government's openness to attract investments. If the dictatorship could have brought wealth in the nation, then many countries such as Nigeria and Myanmar, which are under dictatorial rule, would have become rich.

(ii) I agree with this statement that democracy can not reduce income inequality as there are sectional communities which have different professions. Democracy brings social and political equality. People have the right to vote and access the fundamental rights.

(iii) This is not a correct statement. For the development of a country, it is important to focus on human resources. The country is made up of its people and it cannot grow until its population is literate and healthy. By increasing the literacy rates and improving the health standards of its people, the government can develop the required human resources which are essential for the industrial development of the country.

(iv) The statement is not completely true. Though it is right that in a democracy every citizen has the right to cast one vote but it does not mean that there is an absence of conflicts. Major group of the society may try to dominate the minority of society. This, in turn, will give rise to the conflicts in the society.

(i) Following a High Court directive, a temple in Orissa that had separate entry doors for Dalits and non-Dalits allowed entry for all from the same door.

(ii) A large number of farmers are committing suicide in different states of India.

(iii) Following allegation of killing of three civilians in Gandwara in a fake encounter by Jammu and Kashmir police, an enquiry has been ordered.

(i) The biggest challenge, in this case, is to eliminate the inequalities that are based on casts. Legal action must be taken against such people who indulge in such practices of discrimination. They should be severely punished as our constitution declares any discrimination based on caste as a crime punishable by law.

(ii) A large number of farmers are committing suicides in different states of India because of the economic inequalities that still exist in or country. Farmers, sometimes, are unable to repay their loans due to uncertain losses in their crops that may have happened because of the weather conditions. In such a situation, farmers who get overburdened by the loan sometimes take severe steps like committing suicide. The government should provide these farmers with subsidies which will help them to earn profits and have a satisfactory level of earning.

(iii)  Here, the challenge to democracy is to control the power of the police and other authoritative officials. Another major challenge is to preserve the people’s trust in government arms like the police.

5. In the context of democracies, which of the following ideas is correct – democracies have successfully eliminated:

A. conflicts among people

B. economic inequalities among people

C. differences of opinion about how marginalised sections are to be treated

D. the idea of political inequality

6. In the context of assessing democracy which among the following is odd one out. Democracies need to ensure:

A. free and fair elections

B. the dignity of the individual

D. equal treatment before the law

7. Studies on political and social inequalities in democracy show that

A. democracy and development go together.

B. inequalities exist in democracies.

C. inequalities do not exist under a dictatorship.

D. dictatorship is better than democracy.

Answer: B. inequalities exist in democracies.