Check Out all the latest news about UPSC NDA, 2017, exam dates, admit card and result updates. NDA-2017 shall be conducted twice in this year. NDA 2017 result will be declared after one month from the completion of exam. NDA & NA is All India National Exam conducted by UPSC. This exam is an entry point for candidates into prestigious job in Army, Air Force, and Navy. The NDA & NA exam is conducted twice in a year. NDA (I) will be organized on the month of April, 2017 and NDA (II) will be organized on the month of September, 2017. 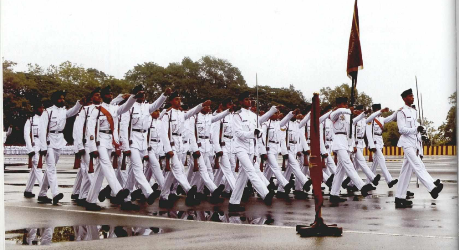 NDA 2017- National Defence Academy is a premier joint training institution and center of excellence for grooming junior leaders for the Indian armed forces and armed forces of Friendly Foreign Countries. The training entails equipping the cadets with mental, moral and physical attributes required to cope with the challenges of the future battle field with the aim of leading troops to victory in conventional, non-conventional and asymmetrical conflicts.

NDA & NA is All India National Exam conducted by UPSC. This exam is an entry point for candidates into prestigious job in Army, Air Force, and Navy. The NDA & NA exam is conducted twice in a year. NDA (I) will be organized on the month of April, 2017 and NDA (II) will be organized on the month of September, 2017. Through this article, we are giving you the insights about NDA-2017 exam and related information like notifications, application form, important dates, eligibility, etc.

NDA-2017 syllabi encompass science, technology, arts and military subjects. The three-year course is split into six terms. A cadet is awarded a Bachelor's Degree from the Jawaharlal Nehru University. The regimen consists of physical conditioning which includes drill, swimming, horse riding, full gamut of games and adventure activities. In three years at the Academy, he is transformed from a Cadet into a potential Officer and a gentleman.

After Successfully Completion of NDA Exam:

To become the Army personnel is always every child’s dream during their childhood days. Because since our childhood days, we have been listening, watching and even been taught that Army soldiers are real heroes who always willingly put their life in danger to safeguard country’s border and its citizens. And therefore there are many who wants to give themselves for the services of the nation by joining any of the services from Army, Air force and Navy by choosing it as a career option. But, it’s a cumbersome task to crack any of their test and rigorous training. All the aspiring candidates have to appear for an exam. Candidates who appeared in the exam for National Defense Academy are selected on merit basis.

NDA & NA Exam is an all India test is held every year under the supervision of UPSC (Union Public Service Commission). The UPSC holds this exam twice a year, in the month of April and September. While applying, candidates should give his preference for the service that he/she desires to join.

On the basis of NDA Written exam and SSB interview, final list of selected students are declared. All the successful candidates then undergo the rigorous training.

The objectives of training are:

To provide academic training of the highest quality in order to equip cadets with appropriate qualification as a foundation for their service careers.
To carry out focused training to enable cadets to achieve the requisite physical standards, with proficiency in troop games.
To inculcate in cadets qualities of leadership, a desire for self improvement and a drive to excel in every sphere.
Incorporate culture of jointmanship in training and to promote the spirit of jointmanship in thought, word and deed.
Conduct high quality service training to enable cadets to have a substantial edge over their counterparts during their service careers.
Hone the communication skills of Cadets to articulate their thoughts coherently, concisely and clearly both in speech and writing.
Emphasize on overall personality development of a Cadet by inculcating a sense of self-discipline, honour, integrity, and camaraderie and spirit de corps.
Strive towards enhancement of infrastructure and networking of the Academy in accordance with the infrastructure development of NDA.
Improve and upgrade the quality of life of all personnel in the campus and to foster an environment of spirited and happy team NDA.
Continue the drive towards conserving and preserving the environment, flora and fauna to make NDA plastic free, green campus with zero carbon footprints.

The exam pattern of NDA & NA consists of two stages: Written and SSB Interview. The written test is objective question based. The subjects of the written examination, the time allowed and the maximum marks allotted to each subject will be as follows:–


Both the paper in written test are set bilingually i.e. in English and Hindi both. The use of calculator or Mathematical or logirithmic table for answering objective type papers (Test Booklets) are not allowed inside the examination hall.

After the written test , the Union Public Service Commission shall prepare a list of candidates who obtain the minimum qualifying marks in the written examination as fixed by the Commission in their discretion. Such candidates shall appear before a Services Selection Board for intelligence and Personality Test where candidates for the Army/Navy wings of the NDA and 10+2 Executive branch of Naval Academy will be assessed on officers potentiality and those for the Air Force in Pilot Aptitude Test and for officers potentiality.

It is followed by two stage test:  Psychological Aptitude Test and Intelligence Test.  All the candidates will be put to stage one test on first day of reporting at Selection Centres/Air Force Selection Boards.  Only those candidates who qualify at stage one will be admitted to the second stage/remaining tests.

Candidates who appear before the Services Selection Board and undergo the test there will do so at their own risk and will not be entitled to claim any compensation or other relief from Government in respect of any injury which they may sustain in the course of or as a result of any of the tests given to them at the Services Selection Board whether due to the negligence of any person or otherwise. Parents or guardians of the candidates will be required to sign a certificate to this effect.

Subject to these conditions the qualified candidates will then be placed in the final order of merit on the basis of total marks secured by them in the Written examination, and the Services Selection Board Tests in three separate lists-one for the Army and the Navy, the second one for the Air Force and the third for the Course at the Naval Academy. The names of candidates who qualify for all the Services of NDA and the Naval Academy will appear in all the three Merit Lists. The final selection for admission to the Army and Naval Wings of the National Defence Academy will be made in order of merit up to the number of vacancies available from the merit list for the Army and Naval Wings, for the Air Force Wing from the merit list for the Air Force; and for the Executive Branch of Naval Academy up to the number of vacancies available from the merit list for the Naval Academy, subject to medical fitness and suitability in all other respects. The candidates who are common to all the three merit lists will be considered for selection from all the three lists with reference to their order of preferences and in the event of their final selection from one list, names will be cancelled from the other lists.
Note: Every candidate for the Air Force is given Pilot Aptitude Test only once. The Grade secured by him at the first test will there-fore hold good for every subsequent interview he has with the Air Force Selection Board. A candidate who fails in the first Pilot Aptitude Test cannot apply for admission to the National Defence Academy Examination for the Air Force wing or General Duties (Pilot) Branch or Naval Air Arm.

Candidates who have been given the Pilot Aptitude Test for any previous N.D.A. course should submit their application for this examination for the Air Force Wing only if they have been notified as having qualified in the Pilot Aptitude Test.
The form and manner of communication of the result of the examination to individual candidates shall be decided by the Commission at their discretion and the Commission will not enter into correspondence with them regarding the result. Success in the examination confers no right of admission to the Academy. A candidate must satisfy the appointing authority that he is suitable in all respects for admission to the Academy.

The NDA Exam syllabus of the exam is strictly based on 12th std. paper.

(i) For Army Wing of National Defence Academy- NDA :— 12th Class pass of the 10+2 pattern of School Education or equivalent examination conducted by a State Education Board or a University.

(ii)  For Air Force and Naval Wings of National Defence Academy for the 10+2  Cadet Entry  Scheme at the Indian Naval Academy:— 12th Class pass of the 10+2 pattern of School Education or equivalent with Physics and Mathematics conducted by a State Education Board or a University.

Candidates who are appearing in the 12th Class under the 10+2 patternof School Education or equivalent examination can also apply for this examination.

Age Limits, Sex and Marital Status: Only unmarried male candidates born not earlier than 02nd July, 1997 and not later than 1st July, 2000 are eligible.

Nationality: A candidate must either be (i) a citizen of India, or (ii) a subject of Bhutan, or (iii) a subject of Nepal, or (iv) a Tibetan refugee who came over to India before the 1st January, 1962 with the intention of permanently settling in India, or (v) a person of Indian origin who has migrated from Pakistan, Burma, Sri Lanka and East African Countries of Kenya, Uganda, the United Republic of Tanzania, Zambia, Malawi, Zaire and Ethiopia or Vietnam with the intention of permanently settling in India. Provided that a candidate belonging to categories (ii), (iii), (iv) and (v) above shall be a person in whose favour a certificate of eligibility has been issued by the Govt of India. Certificate of eligibility will not, however, be necessary in the case of candidates who are Gorkha subjects of Nepal.

To achieve success in any exam including NDA/NA Exam require hard labour, consistency with tight discipline and some fundamental rules to follow. And much steel requires for preparing and cracking NDA exam. So dear students, here are some of the basic things which you must apply during your preparation days for better result.
Syllabus: The first thing you must do is to give a closer look to exam syllabus. Because your entire preparation is based on this. Syllabus of exam will help you to know the length and width of any topic or subject.

Paper 2: General Ability Test:
Paper pattern: Once you are done with syllabus then try to understand the NDA exam pattern. The examination for NDA will consist of two papers, namely Mathematics (300 marks) and General Ability Test (600 marks). The candidates will be given a time of two and a half hours to finish the examination as the questions will be objective type questions. The exam pattern gives you the idea about which topic is important and which needs less devotion of time. So, that you can have your complete analysis of last year questions.

Here are some tips and tricks to help you prepare with the NDA entrance examination: