Three out of the total 21 PVC Awardees were trained at the prestigious National Defence Academy (NDA). The awardees are - DCC Gurubachan Singh Salaria, SCC Arun Khetrapal and Capt Manoj Kumar Pandey. Incidentally, they all were conferred with the highest honour posthumously. 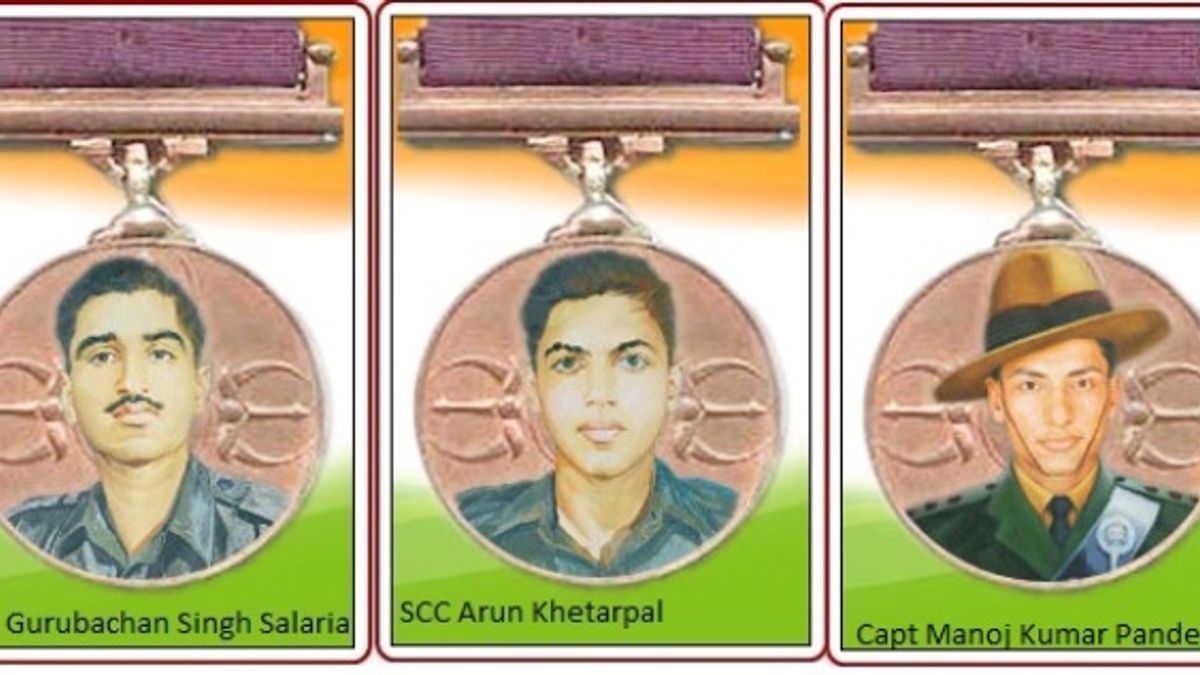 The Param Vir Chakra (PVC) is awarded to officers and enlisted personnel of all military branches for the highest degree of valour and self sacrifice in the presence of the enemy. The PVC, which can be awarded posthumously, is a post-Independent equivalent of the Victoria Cross (VC).

So far, three out of the total 21 awardees were trained at the prestigious National Defence Academy (NDA). The awardees are - DCC Gurubachan Singh Salaria, SCC Arun Khetrapal and Capt Manoj Kumar Pandey. Incidentally, they all awarded the highest honour posthumously.

Their journey to the eternal glory is fascinating and a source of inspiration to all of us to contribute something positive to the country. To inspire NDA aspirants, we are presenting the incidents occurred on their martyrdom.

He was commissioned into 3/1 Gorkha Rifles in December 1956. In 1961, the battalion formed part of UN Headquarters in Elizabethville and was in imminent danger of encirclement and attack by  the local gendarmerie. A tactical was assigned to his battalion. In the ensuing battle, Capt  Salaria  with two sections of Gorkhas and two Swedish APCs led the assault against a well entrenched, numerically superior enemy, supported by two armoured cars. The final charge with bayonets and khukris completely shocked the enemy who ran away leaving forty dead. Hit by a burst of automatic fire in his neck and bleeding profusely, Capt Salaria continued leading the charge till he collapsed. For this valiant act, the country’s highest war honour, the Param Vir Chakra was bestowed upon him.

He was commissioned into 17 Horse in June 1971. In December 1971, the regiment was in the Western Sector where Indian and Pakistani  troops were in battle array. On 16 December, 17 Horse joined battle with the enemy’s 8 Armoured Brigade. During the course of battle, 2/Lt Arun Khetrapal, leading his troops overran the enemy defenses and captured the enemy infantry and tank crew at pistol point. The enemy reorganized and launched a second attack with armoured squadron. Ten enemy tanks were destroyed in the fierece tank battle which followed, four of them by the determined young Lieutenant. His tank, then received a direct hit and burst into flames. Though severly wounded, he refused to abandon his tank. With grim resolve, he set about the task of destroying the remaining enemy tanks. The last one he shot was barely hunderd metres away. The Lieutenant and his tank erupted in a final blaze of glory after a second direct hit on the turret. Thus ended the glorious saga of a brave young warrior. A grateful nation conferred upon him the nation’s supreme honour for gallantry and heroism beyond the call of duty.

He was commissioned into 1/11 Gorkha Rifles. On 02/03 July 1999, the battalion was involved in the battle of Khalubar in the Kargil Sector. Capt Manoj Kumar Pandey led his men in exemplary fashion and displayed extraordinary valour and courage in recapturing the Juber Top from the enemy. He accomplished the assigned task with a display of astute leadership and raw courage. He led his men from the front and surged ahead despite the hail of bullets and accurate enemy of fire from a commanding position. The assault culminated in a hand – to –hand combat wherein he was grievously injured. With utter disregard for personal safety, he led his men by example and recaptured the post before succumbing to his injuries sustained during the operation. He was awarded the nation’s highest martial honour for upholding cherished ideals and displaying raw courage under fire.

The courageous acts of DCC Gurubachan Singh Salaria, SCC Arun Khetrapal and Capt Manoj Kumar Pandey are an inspiration to the youth of the country, especially the NDA aspirants.