IAS Exam always ask the question on the issue of National and International Importance. Nuclear Security Summit was one such issue which will change and affect the interaction of Nuclear for Peaceful purpose among the countries. 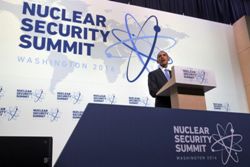 IAS Exam always ask the question on the issue of National and International Importance. Nuclear Security Summit was one such issue which will change and affect the interaction of Nuclear for Peaceful purpose among the countries. It will set the stadards of such interaction, exchange, import and the like inter-relationships for the Nuclear Material.

Q. Discuss the relevance of Nuclear Security Summit and the way ahead for the Istitution.

Q. Nuclear Security Summit and other such institutions are required today. Discuss

The president Obama, in 2009 had delivered a powerful speech depicting his apprehension towards nuclear terrorism in Prague. Outlining his administration’s policies on nuclear weapons and nuclear security, he appealed world leaders to assemble in Washington, DC, one year later to work together to lock down thousands of tons of vulnerable nuclear materials spread across the globe to prevent it from getting into the hands of terrorists. This was termed as first Nuclear Security Summit of 2010 in Washington DC. It was probably the largest gathering of world leaders in recent times to focus on important spotlight

Apart from 2010, The Nuclear Security Summits were held in 2012 in Seoul and 2014 in the Netherlands. These Nuclear Security Summits have showed significant progress to secure the use of nuclear materials. Along with this, these summits have also helped in total 11 countries to take the single most significant step to protect against catastrophic nuclear terrorism, i.e. it helped them to eliminate their stocks of weapons-usable nuclear materials.India has also been contributing its bit to strengthen nuclear security by taking an active part in the summit ever since its inception in 2010.

•    It also helped countries to enhance physical protection at 650 international radiological facilities and 32 nuclear plants besides putting in place radioactive detection equipment at 328 border crossings, airports and seaports across the globe.

However, off late this has been observed that despite substantial progress, significant security gaps remain and there is still no effective global security system in place to provide the ample rules and regulations for nuclear security and hold countries accountable for their actions. Nuclear security policy experts are looking with immense optimism  to chart a clear path for continued progress in the years to come.

Following can be considered as working mandate of Nuclear Security Summit:
•    Ratifying and implementing treaties on nuclear security and nuclear terrorism;
•    Cooperating through the United Nations to implement and assist others in connection with Security Council resolutions;
•    Working with the International Atomic Energy Agency to update and implement security guidance and carry out advisory services;
•    Reviewing national regulatory and legal requirements related to nuclear security and nuclear trafficking;
•    Converting civilian facilities that use HEU to non-weapons-usable materials;
•    Research on new nuclear fuels, detection methods, and forensics techniques;
•    Development of corporate and institutional cultures that prioritize nuclear security;
•    Education and training to ensure that countries and facilities have the people they need to protect their materials; and,
•    Joint exercises among law enforcement and customs officials to enhance nuclear detection approaches.
•    Encouraging participating countries to announce specific actions to minimize the use of HEU by the end of 2013;
•    Urging participating countries to ratify the 2005 Amendment to the Convention on the Physical Protection of Nuclear Material by 2014;
•    Recognizing a need to increase synergy between nuclear safety and nuclear security;
•    Emphasizing the need to improve the security of spent nuclear fuel and radioactive waste; and,
•    Establishing specific measures to ensure the protection of radioactive sources.
•    Strengthening the global nuclear security architecture
•    Elevating the importance of cooperation between governments and nuclear industry
•    Maintaining the high level of achievement on Summit commitments

Following are the key points of 2016 Summit:

•    The Nuclear Security Summit 2016 will continue to provide a forum for leaders to engage with each other and reinforce our commitment at the highest levels to securing nuclear materials.

•    Many countries made following announcements:

•    A strengthened nuclear security agreement, which had languished since 2005, was finally approved, extending safeguards for nuclear materials and requiring criminal penalties for nuclear smuggling.

•    The summit participants stated that the 2016 summit would be "the last of this kind".

In tune with the security requirements as perceived by India, the nuclear security architecture in the country has been strengthened and India has also participated in strengthening security architecture at the global level.  After the Nuclear Security Summit, it was announced that India will join three ‘gift baskets’ to disrupt transnational nuclear smuggling networks, as well as to set up an informal structure to sustain the momentum after the NSS process ends. [‘Gift basket’ diplomacy was devised at the Seoul 2010 summit as a way around the need for universal consensus for any deliverable to be finalized on a multilateral platform.]

So far, India had refrained from joining any of the fifteen-odd informal groups or ‘gift baskets’ formed over a specific theme. But, at this last summit, New Delhi is ready to take the plunge.

In the coming years, it is expected that a lot of nuclear activity will take place and  substantial amount of such activity will arise from the commitment taken by states at the four nuclear security summits and the voluntary pledges undertaken by different countries. Civil society is expected to assert much pressure on nuclear issues. One area of their focus would be minimization of nuclear fissile material and India will also encounter pressure in this regard, particularly from foreign civil society organizations and think tanks.

The demand to reduce fissile materials products will be made on India as well. India already has adopted the policy of credible minimum deterrence. However, the best solution lies in global nuclear disarmament because unclear reduction for national needs will always be contested.