Check most important questions on facts related to Europe in this article. Aspirants of UPSC Civil Services Prelims 2021 exams can solve these questions to test their knowledge of World Geography. 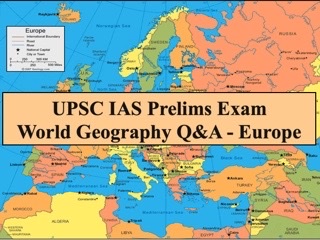 Europe is the second smallest continent in the world. It is bordered on the north by the Arctic Ocean, on the west by the Atlantic Ocean, and on the south (west to east) by the Mediterranean Sea, the Black Sea, the Kuma-Manych Depression, and the Caspian Sea. Europe is spread over an area of 4 million square miles or 10 million square km within the conventional borders assigned to it. Europe has considerable and long-exploited resources base of soil, forest, sea and minerals mainly coal. It also supports high densities of population, concentrated in urban-industrial regions. In 1957, the European Economic Community is established and the European Union in 1993 which has enhanced economic cooperation between many of the continent countries.

Ques 1: The river Neva of Russia drains its water into which of the following gulf?

(a) Gulf of Bothnia

(b) Gulf of Finland

Ques 2: Consider the following statements regarding the Alpine Mountain Ranges:

Ques 3: Which of the following sea is not a part of the Atlantic Ocean?

Ques 4: The Bay Biscay separate which of the following two nations?

(a) Estonia and Latvia

(b) France and Spain

Ques 5: Consider the following statements regarding Strait of Gibraltor:

Ques 6: Which of the following group of countries together called 'Iberia'?

(a) Spain and Portugal

(b) Norway, Sweden, Iceland and Denmark

Ques 7: Which of the following is the highest peak of Europe?

Ques 8: Which of the following is the second longest river of Europe passes through five capital cities of Europe?

Ques 9: Which of the following ports form starting and ending points of Suez Canal?

(b) Port Alexandria and Port Suez

Ques 10: Which of the following group of countries together called 'Scandinavia'?

(a). Spain and Portugal

(b). Norway, Sweden, Iceland and Denmark