Find WBJEE 2015 Solved Physics Question Paper – Part 4 in this article. This paper consists of 5 questions (#16 to #20) from WBJEE 2015 Physics paper. Detailed solution of these questions has been provided so that students can match their solutions.

16. A ray of light is incident at an angle i on a glass slab of refractive index μ. The angle between reflected and refracted light is 900. Then the relationship between i and μ is 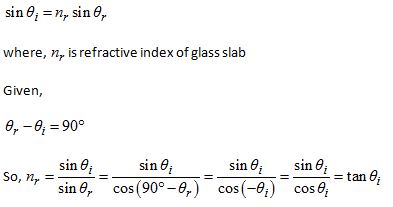 17. Two particles A and B are moving as shown in the figure. Their total angular momentum about the point O is

Now, since v and r are perpendicular to each other so,

18. A 20 cm long capillary tube is dipped vertically in water and the liquid rises upto 10 cm. If the entire system is kept in a freely falling platform, the length of water column in the tube will be

In gravity less condition the entire tube fills with water.

So, the length of water column in the tube is 20 cm.

19. A train is moving with a uniform speed of 33 m/s and an observer is approaching the train with the same speed. If the train blows a whistle of frequency 1000 Hz and the velocity of sound is 333 m/s then the apparent frequency of the sound that the observer hears is

According to Doppler effect,

When both observer and source are moving, then apparent frequency is given as:

v = velocity of sound in air

vs = velocity of source

On putting the given values in above equation, we get

20. A photon of wavelength 300 nm interacts with a stationary hydrogen atom in ground state. During the interaction, whole energy of the photon is transferred to the electron of the atom. State which possibility is correct? (Consider, Planck’s constant = 4 × 10–15 eVs, velocity of light = 3 × 108 m/s, ionization energy of hydrogen = 13.6eV)

(A) Electron will be knocked out of the atom

(B) Electron will go to any excited state of the atom

(D) Electron will keep orbiting in the ground state of atom

The energy contained in the photon of given wavelength is given by,

Putting the values given in question,

This energy is less than first excitation energy of hydrogen i.e. 10.2 eV.

So, electron will keep orbiting in its ground state.