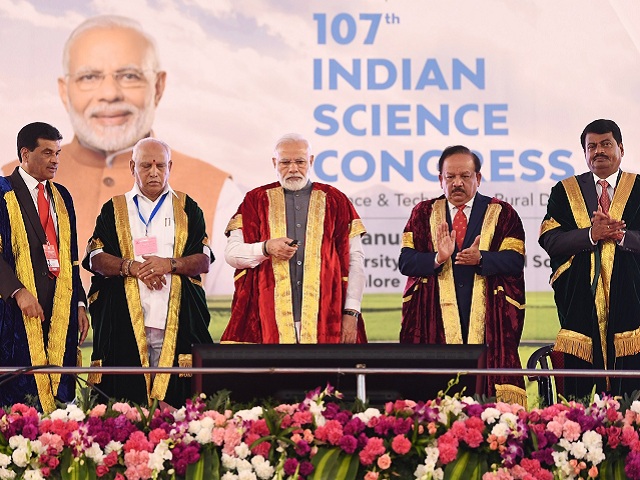 The 107th Indian Science Congress (ISC) was inaugurated by Prime Minister Narendra Modi on January 3, 2019 at the University of Agricultural Sciences in Bengaluru.

While delivering the inaugural address, the Prime Minister said that India’s growth story depends on its achievements in the Science and Technology sector and reiterated the need to revolutionise the landscape of Indian Science Technology and Innovation.

PM Modi gave the motto of “Innovate, Patent, Produce and Prosper” to the young scientists in the country, saying that these four steps will lead India towards faster development. He stated that “innovation for the people and by the people is the direction of New India.”

The 107th Indian Science Congress (ISC) will be held from January 3-7, 2020 at the University of Agricultural Sciences in Bengaluru, Karnataka.

The five-day summit is expected to witness participation from several policymakers, scientists, academians, inventors and politicians from across the world. Two Nobel Prize winners, Stefan Hell and Ada Yonath are also expected to attend the congress and conduct lectures.

The 107th Indian Science Congress aims to bridge the gap between farmer and tech-developers. Many of the innovations have helped in enhancing market access, crop productivity and diversifying rural livelihood profiles. However, the gap between the farmers and innovators has resulted in only partial exploration of the benefits.

The 107th Indian Science Congress will provide the desired platform to the farmers who introduced innovations in agriculture.

During the inauguration of the 107th Indian Science Congress, PM Modi also launched the Indian Science Technology and Engineering facilities Map (I-STEM) Portal. The portal has been designed to be the gateway for researchers to locate a specific type of facility they require to conduct their research and development work in India.

How will Science & Technology boost rural development in India?

• The Prime Minister highlighted that Science and Technology has played a significant role in helping the government programmes reach the needy. He stated that science and technology level the playing field by making opportunities accessible to all and it also plays a unifying role in society.

• PM Modi highlighted how developments in information and communication technology have led to the production of cheaper smartphones and the availability of cheaper data, which has made it accessible to everyone in the country. Earlier, smartphones and internet data were considered as a privilege that was limited to a few people.

• The wider internet connectivity has brought the common man closer to the government and provided an opportunity for anyone to make his/her voice heard. The Prime Minister further said that the new India needs technology and logical temperament to give a new direction to the social and economic sectors.

• PM Modi further urged the young scientists in India to work in the field of rural development, as there are several opportunities for cheaper and better innovations.

• India currently stands at the 3rd position globally in the number of peer-reviewed science and engineering publications.

• India is also growing at a rate of about 10 percent in the sector in comparison to the global average of 4 percent.

• India also improved its ranking in the Innovation Index with its 52nd rank this time. The central government programmes have created more incubators in the last 5 years than in the previous 50 years.

The Union Government is aiming to harness technology at a wider scale to achieve the objectives of Good Governance, especially in the area of cost-effective agriculture and farm to the consumer supply chain.

PM Modi highlighted the role of Aadhaar enabled technology, Geo Tagging and data science in the timely completion of several rural and urban projects. Besides this, digitization, the advent of e-commerce, the internet and the mobile bank has played a huge role in rural development.

Technological solutions can also be chalked out for issues such as stalk burning, groundwater management, prevention of communicable diseases and environment-friendly transportation.

PM Narendra Modi reiterated that Science and Technology and innovations in the sector will play a huge role in leading India’s towards its goal of achieving a $5 Trillion Economy.