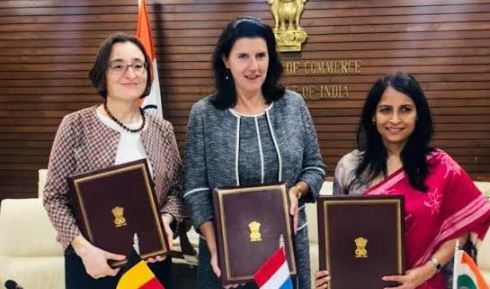 This joint session was attended by various officials of External Affairs Ministry, New & Renewable Energy, Information and Broadcasting and railways. The focus of bilateral relations has been paid on trade and investment.

• The importance of Joint Economic Commission between India and BLEU was reiterated.
• India and BLEU agreed on enhancing cooperation in issues of mutual interest, like, renewable energy transportation and logistics, audio and visual industry, agro and food processing industry, aerospace and satellites, ICT, traditional medicine, life sciences and yoga among others.
• It was resolved during the meeting that the dynamic nature of commercial exchanges seen in the last few years.
• Various companies are interested in establishing their businesses in both of the countries for cooperation in multiple fields.

Joint Economic Commission (JEC) Sessions were established after an agreement signed in 1990 in New Delhi. JEC sessions take place every other year in capital cities of the three countries alternatively and are the main vehicle for discussing economic and commercial issues between India and BLEU.

The bilateral trade between India-Luxembourg was USD 161.98 million in the year 2018-19 and USD 17.2 billion between India-Belgium in 2018-19. According to government data, about 160 Belgian companies are working in India. On the other side, Indian companies like HCL, Infosys, Tech Mahindra and TCS have established a base in Belgium. India and Belgium’s bilateral relations have been focused on trade and investment. India is Belgium’s fourth-largest trade partner outside the European Union and second-largest export destination.