The Centre will also disburse Rs 25000 crore towards Integrated GST for 2017-18 to those states that received less amount due to the anomalies. 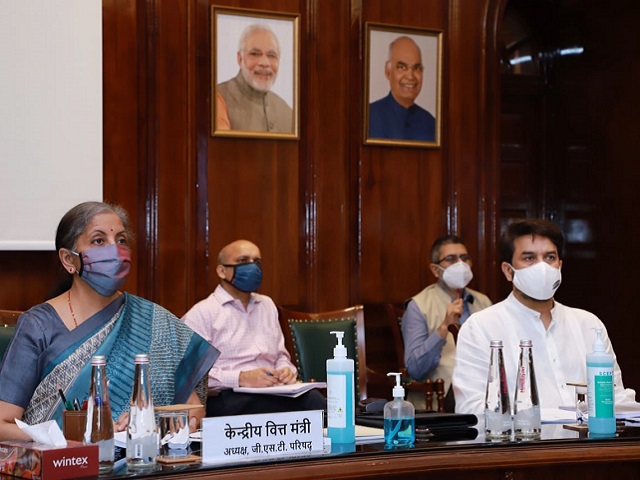 The Government released compensation cess worth nearly Rs 20,000 crore to all the states on October 5, 2020. The announcement for the same was made by Union Finance Minister Nirmala Sitharaman after the 42nd GST Council meeting.

The Finance Minister while briefing the media stated by next week, Centre will also disburse Rs 25000 crore towards Integrated GST for 2017-18 to those states that received less amount due to the anomalies.

The Finance Minister also informed that the GST Council has deferred the decision on the mode of payment of pending GST compensation share of the states to the Council's October 12 meeting.

• The GST Council took up the long-pending issue of Integrated Goods and Services Tax and decided to disburse Rs 25000 crore to all the states that have received less amount due to various reasons.

• The GST Council also recommended the extension of compensation cess levy beyond the transition period of five years that is beyond June 2022, for such period as may be required to meet the revenue gap.

• The Council, however, deferred the main point of contention- the decision on pending GST compensation to states-to October 12, when the GST Council is expected to meet again to smoothen out the differences.

• Besides this, the GST panel increased the borrowing limit to Rs 1.1 lakh crore instead of earlier Rs 97,000 crore in the centre's first borrowing option given to states.

• The GST Council meeting was attended by Finance Ministers of all States and Union Territories.

• Following the meeting, FM Nirmala Sitharaman stated that about 20 to 21 states chose one of the two options given by the Centre that allowed the states to borrow to cover the compensation shortfall.

• Other states, the opposition-run ones, did not choose any option and wanted the Centre to borrow and pay for the shortfall.

The centre had given the states two options in August to meet their GST shortfall at a time when revenue generation has been severely hit by the pandemic. The two options were as follows:

1. Borrow Rs 97,000 crore from a special window facilitated by the RBI.

While 21 states, mostly led by BJP or those who had supported its options, opted to borrow Rs 97,000 crore by mid-September to meet the GST revenue shortfall in the current fiscal, most of the opposition-ruled states including Rajasthan, Telangana, West Bengal, Chhattisgarh, Delhi, Tamil Nadu, Kerala, Puducherry and Punjab have not yet accepted the two borrowing options given by the Centre.

Under GST compensation, the states are guaranteed to be compensated for any loss of revenue owing to the implementation of the GST, which entailed them giving up powers to collect taxes under the earlier system. The loss incurred by the states is computed based on a formula provided in the GST (Compensation to States) Act.

Under the formula, states are guaranteed 14% compounded growth in GST revenue each year and any shortfall is required to be met through a compensation cess that is levied on luxury and sin goods and goes to the compensation fund.

According to the centre, the compensation requirement by the states in the current fiscal would be Rs 3 lakh crore, out of which Rs 65,000 crore is expected to be met from the cess levied in the GST regime. A shortfall of around Rs 2.35 lakh crore is estimated.