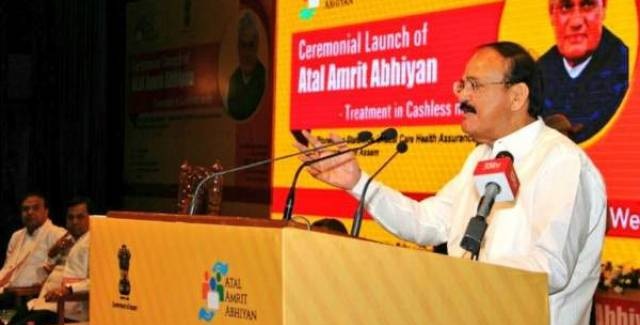 Speaking on the occasion, the Vice President said that it is estimated that the number of Indians falling below the poverty line due to health spending run as high as 63 million and that the need of the hour is to safeguard people from this catastrophic health expenditure by providing comprehensive care. “If the scheme is implemented in its letter and spirit, it will help the poor to a great extent, he added.”

• The scheme has been named after former Prime Minister Atal Bihari Vajpayee.

• It offers free medical care of up to Rs 2 lakh to every individual belonging to Below Poverty Line (BPL) and Above Poverty Line (APL) families.

• It will cover 92 per cent of the state's population with annual income below Rs 5 lakh.

• The state government has allocated Rs 400 crore for the scheme in the financial year 2018-19.

The move is one step towards India’s ambitious goal of achieving universal health coverage by ensuring equitable access to healthcare for all citizens, regardless of their income level, social status, gender, caste and religion.

• While launching the health scheme, the Vice President referring to the National Family Health Survey-IV stated that one of the reasons behind the poor infrastructure of the medical sector was the shortage of manpower, mainly doctors.

• He pointed that India has less than one doctor for every 1,000 people, which is far below WHO norm.

• He further urged the Assam government to open medical colleges and healthcare centres in rural areas.

• He stated that people are not willing to go to rural areas, even though 60 per cent of the population still lives in villages.

• Hence, he said that the doctors who serve in rural areas must be given preferences during admission in PG medical courses.

• Further, Naidu said that India has fared well in dealing with communicable or infectious diseases, but non-communicable diseases still remain a challenge for the nation.