Australia Wildfires: Everything You Need To Know

Australia Wildfires in News: Australia has been witnessing worst-ever wildfires for the past four months. According to the various reports, about 50 crore animals and birds have died or been seriously damaged. Thousands of people left their homes and property of millions of dollars were damaged.

The worst effect of Australian wildfires has been seen on koalas (a species of animal) as their population drastically decreased due to fire. The mid-northern region of New South Wales has the highest number of koalas.

Australian Prime Minister Scott Morrison announced an aid of two billion Australian dollars to provide relief to those who lost their homes and livelihood due to the severe fire in the forests.

Also Read | Word of Decade: ‘They’ gets highest votes, check out why!

When and Where?
• Three states of Australia – South Australia, Queensland, and Victoria are witnessing this severe wildfire.
• It is reported that the fire was started in September 2019 but it turned severe in the last week of December 2019.
• As per the reports, about 15 million hectares of land have been affected by wildfire which is still increasing.

What Australia lost in wildfires? 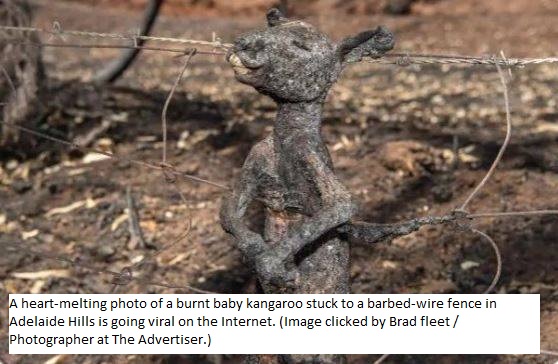 • The ecologists of the University of Sydney has estimated that about 50 crore animals have died due to wildfires.
• The Australian Government has also started a rescue operation to save animals. Kangaroos are fleeing to cities to save their lives.
• More than 200 houses have also been gutted in the fire. The impact of the fire has now reached Sydney and thousands of people have been evacuated to safer places.
• The impact of Australia's forest fire is also being seen in New Zealand.
• The Australian government has declared a state of emergency in many affected areas.

Measures
The National Bushfire Recovery Agency has formed under the chairmanship of former federal police Chief Andrew Colvin. It will help the people of Australia to recover from wildfires. The Prime Minister announced that the agency would be given an amount of two billion Australian dollars in the initial days to help the families, farmers and others affected by the forest fire. Several NGOs, volunteers, and international agencies are working to save lives from wildfires.

A forest fire is also known as a wildfire that is uncontrolled and massive in nature. Sometimes, forest fires are so large that fire-fighters take a long time to regain control of the situation. This can result in massive destruction. There are several regions in the world where wildfire breaks very often. These areas are – South America, Amazon forests, South Africa, Australia, and Canada forests.