Supreme Court of India delivers the Ayodhya Verdict,  paving the way for Hindus to build Ram Mandir on the disputed land.  On the other hand, Muslims/Waqf Board get alternate land of 5 acres to build the Mosque. Check here detailed Ayodhya case ruling. 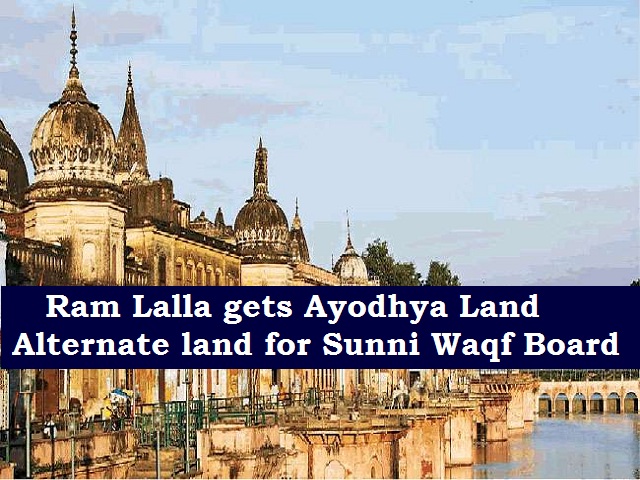 Ayodhya Judgement: The Supreme Court of India delivered the crucial verdict on Ram Janmabhoomi Babri Masjid land dispute case, wherein, Hindus get the disputed Ayodhya Land to build the Ram Mandir and Muslims get the alternate land of 5 acres to build the mosque. The verdict comes after 9 years of Allahabad High Court Judgement, wherein, it divided the land among three parties - Ram Lalla, Sunni Waqf Board and the Nirmohi Akhara.

The Supreme Court scrapped the high court ruling by giving the complete disputed land to Hindus and rejecting the claim of Waqf Board and Nirmohi akhara. Chief Justice Ranjan Gogoi began the judgement after observing the developments in the Ayodhya land dispute case so far. The CJI observed that the ASI Report clearly depicts that Babri Masjid was not built on vacant land; this land was not of Islamic origin.

Check here the complete ruling of the Supreme Court on Ayodhya Land dispute case along that is explained in the easy language below. Know what falls in the pocket of Ram Lalla/Muslims/Waqf Board/Others.

Unanimous Ayodhya Verdict- The Ayodhya Verdict is Unanimous; all the judges are in favour. The 5-Judge Bench has unanimously rejected the claim of Shia Waqf Board in the Ayodhya land dispute case.

Court accepts the faith of Worshippers- The court unanimously said that there is no clear evidence of the construction date of the Babri Masjid. The court must accept the faith of the worshipers.

Nirmohi Akhara Suit Rejected- The apex court held that the suit filed by the Nirmohi akhara was time-barred.

SC upheld ASI Report- The court upholds the report of Archaeological Survey of India (ASI) which depicts that Babri Masjid was not built on vacant land; the land was not of Islamic origin.

Mosque was not abandoned- SC held that mere cessation of Namaz cannot imply that the mosque was abandoned.

Sunni Waqf Board can't claim adverse possession- Since the board has failed to prove adverse possession of the land, so the land cannot be given to them. There is clear evidence that Hindus have been visiting the premises before 1857 as well.

Ayodhya Land granted to Ram Lalla/Hindus- The Supreme Court finally granted the disputed land to the Hindus/Ram Lalla, clarifying that the right of Ram Lalla is subject to the maintenance of peace and order. The Central Government will soon be framing a scheme in this regard. The land will be officially allotted by the board of trustees.

Nirmohi akhara to be given a place in Trust: The court ruled that the Nirmohi Akhara could get the representation in the trust, if approved by the centre.