The World Integrated Medicine Forum on the regulation of Homoeopathic Medicinal Products with the theme Advancing Global Collaboration was inaugurated by Sripad Naik, Union Minister of State (I/C), Ministry of AYUSH on January 23, 2019. 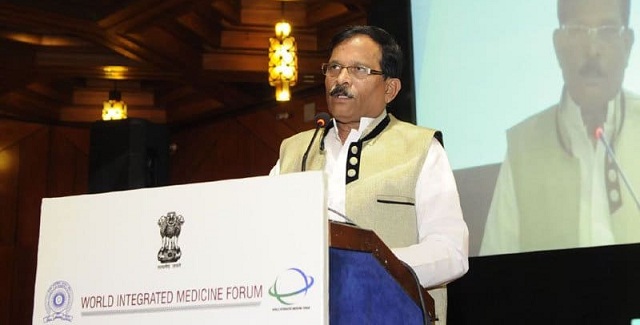 The World Integrated Medicine Forum on the regulation of Homoeopathic Medicinal Products with the theme ‘Advancing Global Collaboration’ was inaugurated by Sripad Naik, Union Minister of State (I/C), Ministry of AYUSH on January 23, 2019.

The three-day forum is being organised by Central Council for Research in Homeopathy (CCRH), with the support of Ministry of AYUSH, Homoeopathic Pharmacopoeia Convention of the United States (HPCUS) and European Coalition on Homeopathic and Anthroposophic Medicinal Products (ECHAMP), Pharmacopoeia Commission of Indian Medicine and Homoeopathy and Central Drugs Standard Control Organization (CDSCO).

• The forum would see participation from key public and private sector stakeholders, such as representatives from World Health Organisation (WHO) and drug regulatory authorities, as well as pharmacopoeia experts and industrialists from different countries across the world.

• It would also see participation from veterinary experts, as well as the regulators and drug controllers of various states of India.

• The forum discussions will primarily explore the commonalities as well as differences in regulatory affairs among various countries, discuss strategic regulatory and industry perspectives and possible scenarios in advancing international collaboration.

• It would also focus on the ways to further enhance pharmaceutical quality standards, deliberate on integrating traditional medicine systems in primary healthcare and public health and bring forth the perspectives on setting appropriate requirements on various dimensions of drug approvals including veterinary medicine.

The first such forum was organised by Central Council for Research in Homeopathy (CCRH) in 2017, which was hugely successful in initiating dialogues on the steps needed in various countries for effective regulations of homoeopathic medicinal products.

It was conceived jointly by CCRH, Ministry of AYUSH and the World Integrated Medicine Forum (WIMF) with the aim of bringing the homoeopathic industry and regulatory sector on a common platform for strategic discussion.

India is the fifth largest investor in scientific research in Homoeopathy in the world. With the institutional support of more than 200 homoeopathic colleges and an autonomous Research Council having 26 research centres, Homoeopathic Pharmacopoeia Laboratory and a workforce of about 250 thousand homoeopathic clinicians, India can contribute in various aspects of mainstream healthcare.