The Conservatives have won 364 seats out of the total 650 seats in the British House of Commons. 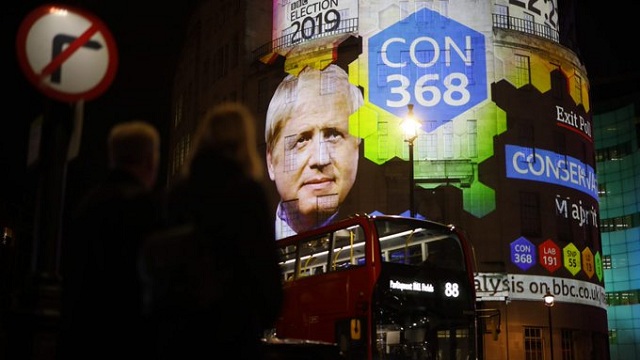 British PM Boris Johnson’s Conservative party has won a large majority in the UK elections 2019, paving the way forward for a smooth Brexit.

The Conservatives have won 364 seats out of the total 650 seats in the British House of Commons, while Jeremy Corbyn’s Labour Party won 203 seats.  Among other parties, the Scottish National Party won 48 seats, the Liberal Democrats won 11 and Democratic Unionist Party won 7.

Johnson’s decisive victory is set to clear path for Britain to leave the European Union in January 2020. Brexit was one of the key campaign promises of Boris Johnson.

• Boris Johnson's Conservatives have won with a large majority. The party has won 364 seats, way above the required majority of 326 seats. The vote share of the party also stood high at 43.6 percent, while the Labour Party’s vote share was 32.2 percent.

• The Liberal Democrat leader Jo Swinson lost her seat to the Scottish National Party. The SNP also increased its vote share in Scotland.

• The leader of the main opposition party, Labour Party, Jeremy Corbyn announced that he would be standing down from his position and will not be leading the party into another election.

• The result is a big win for Johnson, whose gamble of the early vote to break the Brexit deadlock in the British Parliament has paid off.

Boris Johnson's projected majority in the UK elections is the biggest win for his party since Margaret Thatcher’s in 1987. This would probably give him extra time to negotiate with the European Union and gather enough support in the British Parliament to get the Brexit deal approved.

The Brexit deadlock had almost paralysed the nation, with the British Parliament turning down all the Brexit deals agreed upon with the European Union leaders.

Britain’s current departure date from the European Union in January 31, 2019.