The Johannesburg declaration has called for definite stand on corruption and extradition of economic offenders and fugitives and their asset recovery. It also called for fighting international terrorism and early implementation of the Comprehensive Convention on International Terrorism.

The heads of state and government of all five BRICS nations including Brazil, Russia, India, China and South Africa convened for the 10th BRICS Summit from July 25-27, 2018 in Johannesburg, South Africa.

Theme: ‘BRICS in Africa: Collaboration for inclusive growth and shared prosperity in the 4th Industrial Revolution'

The summit saw the BRICS leaders come together and discuss various international and regional issues of common concern and adopted the 'Johannesburg Declaration' by consensus. The declaration reaffirms principles of democracy, inclusiveness and agrees to fight unilateralism and protectionism.

Key Points of the Declaration 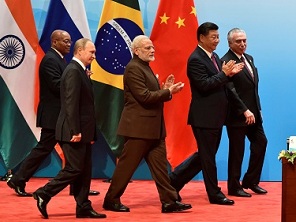 The leaders jointly reaffirmed their commitment to the principles of mutual respect, sovereign equality, democracy, inclusiveness and strengthened collaboration.

The BRICS leaders have used the summit to reject the growing unilateralism and instead reiterate their commitment to the strengthening of multilateral institutions, calling for stronger intra-trade within member states.

The declaration comes as the United States and China remain deadlocked in a trade war over tariffs.

The leaders reaffirmed their commitment to fully implementing the 2030 Agenda for Sustainable Development and the Sustainable Development Goals (SDGs), to provide equitable, inclusive, open, all-round innovation-driven and sustainable development, in its three dimensions — economic, social and environmental — in a balanced and integrated manner, towards the ultimate goal of eradicating poverty by 2030.

The leaders welcomed the progress towards finalising the Work Programme under the Paris Agreement and expressed their willingness to continue working constructively with other Parties to conclude its related negotiations at the United Nations Framework Convention on Climate Change (UNFCCC) towards the 24th Conference of the Parties (UNFCCC COP24), which is to be held in Katowice, Poland in December 2018.

They further called upon all countries to fully implement the Paris Agreement including the principles of common but differentiated responsibilities and respective capabilities and urged the developed countries to provide financial, technological and capacity-building support to developing countries to enhance their capability in mitigation and adaptation.

They also acknowledged that the BRICS Ministers of Energy agreed to establish the BRICS Energy Research Cooperation Platform and to develop its Terms of Reference.

The leaders reaffirmed their support for the establishment of the BRICS Agricultural Research Platform (ARP) initiated by India in 2016.

They agreed to strengthen the agricultural research collaborative networks among the BRICS countries to enhance the resilience of the collective agricultural and food systems in the face of the changing climate.

They committed to step up intra-BRICS collaboration including within the frame of the Agriculture Research Platform and the Basic Agriculture Information Exchange System (BAIES).

The leaders reaffirmed to enhance cooperation and collaboration amongst BRICS countries in the field of biodiversity conservation, sustainable use and equitable access and benefit sharing of biological resources.

The leaders expressed commitment to the continued implementation of the Agenda for BRICS cooperation on population matters 2015-2020, which was agreed to by the Ministers responsible for Population Matters in 2014.

The dynamics of population age structure changes in BRICS countries pose challenges and present opportunities, particularly with regard to gender inequality and women's rights, youth development, employment and the future of work, urbanisation, migration and ageing.

The leaders deplored continued terrorist attacks, including in some BRICS countries and condemned terrorism in all its forms and manifestations.

They recalled the responsibility of all the states to prevent financing of terrorist networks and terrorist actions from their territories.

They called upon the international community to establish a genuinely broad international counter-terrorism coalition and support the UN's central coordinating role in this regard.

They called for expeditious finalisation and adoption of the Comprehensive Convention on International Terrorism (CCIT) by the United Nations General Assembly.

The leaders emphasised on the indivisible nature of peace and security and reiterated that no country should enhance its security at the expense of the security of others.

The leaders of China and Russia reiterated the importance they attach to the status and role of Brazil, India and South Africa in international affairs and their support for their aspiration to play a greater role in the UN.

The BRICS leaders further expressed concern over the ongoing conflict and heightened tensions in the Middle-East region and stated that there is no place for unlawful resorting to force or external interference in any conflict.

The leaders reiterated the need for renewed diplomatic efforts to achieve a just, lasting and comprehensive settlement of the Israeli-Palestinian conflict in order to achieve peace and stability in the Middle East, through negotiations with a view to creating an independent, viable, territorially contiguous Palestinian State living side by side in peace and security with Israel.

The leaders expressed serious concern about the possibility of an arms race in outer space and of outer space turning into an arena for military confrontation.

They reaffirmed that the prevention of an arms race, including of the placement of weapons in outer space, would avert a grave danger for international peace and security.

The leaders advocated continued use of fiscal, monetary and structural policies in concert, to forge strong, sustainable, balanced and inclusive growth.

They expressed concern at the spill-over effects of macro-economic policy measures in some major advanced economies that may cause economic and financial volatility in emerging economies and impact their growth prospects adversely.

Hence, they called on major advanced and emerging market economies to continue policy dialogue and coordination in the context of the G20, FSB and other fora to address these potential risks.

For the full operationalisation of PartNIR, an Advisory Group will be set up, comprising respective representatives of BRICS Ministries of Industry, to develop the Terms of Reference and a Work Plan, which is to be submitted to the BRICS Chair.

The PartNIR aims to deepen BRICS cooperation in digitalisation, industrialisation, innovation, inclusiveness and investment and to maximise the opportunities and address the challenges arising from the 4th Industrial Revolution.

Recognising that the multilateral trading system is facing unprecedented challenges, the leaders underscored the importance of an open world economy, enabling all countries and peoples to share the benefits of globalisation, which should be inclusive and support sustainable development and prosperity of all countries.

They called upon all WTO members to abide by WTO rules and honour their commitments in the multilateral trading system.

Condemning corruption as a global challenge, the leaders committed to strengthening international cooperation within the context of the BRICS Working Group on Anticorruption Cooperation.

The leaders agreed to cooperate in anti-corruption law enforcement, extradition of fugitives, economic and corruption offenders and repatriation in matters relating to assets recovery and other related criminal and non-criminal matters involving corruption and call on the International community to deny safe haven to corrupt persons and proceeds of corruption.

• He said there is need to be vigilant about the adverse impact of the disruptive technologies on the economies of the developing nations. He also laid emphasis on the need to focus on skill development and vocational training to reap the benefits of 4th industrial revolution.

• In his concluding remarks, the Prime Minister said that there is a need to share best practices and policies among BRICS countries.

• The Prime Minister held bilateral meetings on the sidelines of the Summit with the leaders of Russia, China, South Africa, Argentina and Angola.

• It was Modi's third meeting with Chinese President Xi Zinping in last 3 months.

• With 10 years of development, BRICS has grown into an important platform for cooperation among emerging markets and developing countries.

• BRICS countries come from Asia, Africa, Europe and America and are all members of the G20.

• According to IMF’s estimates, the BRICS countries generated 22.53 per cent of the world GDP in 2015 and they have contributed more than 50 per cent of world economic growth during the last 10 years.