The Man Booker International Prize, an international literary award hosted in the United Kingdom, is a counterpart to the ‘Man Booker Prize’ that is awarded only for English-language novels. 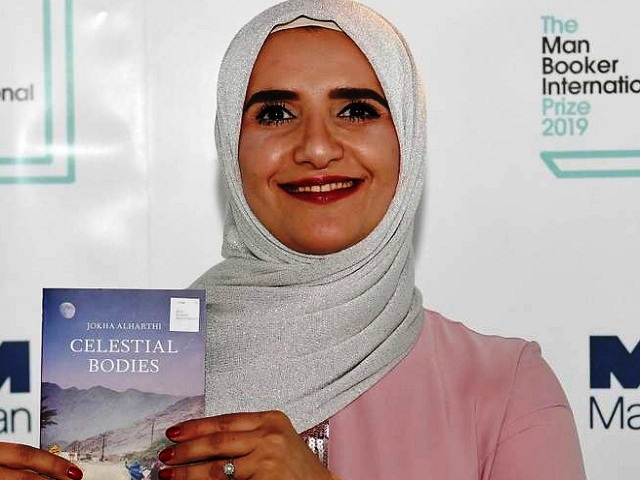 With this, Alharthi became the first Arabic-language writer to win the prize and the first female writer from Oman to have her work translated into English.

Alharthi received the award from Historian Bettany Hughes, the chairwoman of the judging panel, at a ceremony at the Roundhouse, London. While presenting the award, Hughes mentioned that the novel wins “over the head and the heart in equal measure.”

The “Celestial Bodies” novel is the story of three sisters Mayya, Asma, and Khawla. The novel, set in the Omani village of al-Awafi, confronts Oman’s history of slavery, which was abolished in the country only in 1970.

After suffering a heartbreak, Mayya marries into a rich family; Asma marries for duty; and Khawla is shown waiting for a man who has immigrated to Canada.

The novel was first published in 2010 as “Ladies of the Moon”.

Award to be renamed to International Booker Prize

From June 1, 2019, the charitable foundation of Michael Moritz KBE and his wife Harriet Heyman, ‘Crankstart’ will be the new supporter of the Booker Prize and the International Booker Prize.

• The Man Booker International Prize, an international literary award hosted in the United Kingdom, is a counterpart to the ‘Man Booker Prize’ that is awarded only for English-language novels.

• The Prize is open to books in any language that have been translated into English and is distributed in Britain.

• The award was previously from 2005 until 2015 was bestowed every two years to a living author of any nationality for a body of work published in English or available in English translation.

• After 2016, the award became open to books in any language that have been translated into English.

• The award carries prize money of 50,000 pounds that is split equally between the writer and translator.

• The 2018 winner of the prestigious prize was novel ‘Flights’ by Polish author Olga Tokarczuk.