Chandrayaan-2 was lift-off at 2.43 PM IST on July 22 from Sriharikota, Andhra Pradesh. Three components, orbiter, lander and rover, were carried by launch vehicle.

Chandrayaan-2 was lift-off at 2.43 PM IST on July 22 from Sriharikota, Andhra Pradesh. Three components, orbiter, lander and rover, were carried by launch vehicle. Reactions were poured on social media from across the world.

The National Aeronautics and Space Administration (NASA) congratulated ISRO for the successful launch. NASA said in a tweet that US space agency is looking forward to Chandrayaan-2’s discoveries on the Moon. 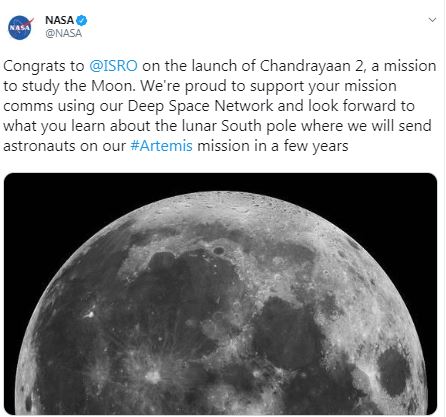 Few hours after India’s successfully launch of Chandrayaan-2 China’s Moon mission also congratulated India for this achievement. China's lunar exploration programme chief Wu Weiren wished Chandrayaan-2 a success. He further said that China's lunar mission is an independent project of China and not in a competition with any other country.

Prestigious US media house comments that Chandrayaan-2 comes close on the heels of the 50th anniversary of the historic Apollo 11, when man first landed on the moon, The Washington Post commented. Washington Post reported with a title - 'India launches moon mission a week after it was aborted.' It further said that India's rover will explore possibility of water deposits on the Moon.

British media giant said that Chandrayaan-2 to become the first lunar mission to land on the lunar South Pole region, where it will collect crucial information about the moon's composition. The Guardian also congratulates India and ISRO on this achievement.