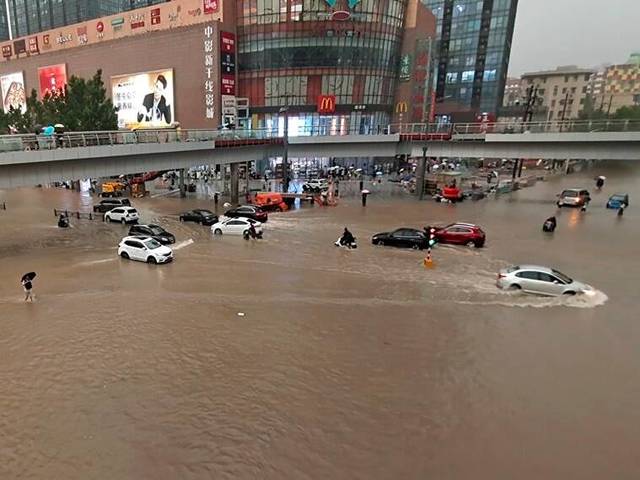 China’s central Henan province witnesses the heaviest rainfall in 1,000 years that has killed at least 33 people, including 12 people trapped in the subway. Zhengzhou City recorded 617.1 mm rainfall from July 17, 2021, to July 20, 2021, equaling the annual average rainfall of 640.8 mm in the city.

Visuals of people trapped in the subway submerged in floodwater and cars floating in Zhengzhou city have emerged on Twitter. As per media reports, approximately 1.24 million people have been affected by the floods in Zhengzhou city which has a population of over 1.2 crores. Around 1,60,000 have been evacuated.

UN Climate Change tweeted, “Dramatic climate impacts continue around the world. Zhengzhou in China has seen the highest daily rainfall since weather records began, receiving the equivalent of 8 months of rain in a single day.”

Dramatic climate impacts continue around the world. Zhengzhou in China has seen the highest daily rainfall since weather records began, receiving the equivalent of 8 months of rain in a single day. #COP26 pic.twitter.com/7dtyHLUD6J

What caused the heaviest rain in China?

• Scientists said the rainfall in China is linked to global warming, just as were other climate events like extreme flooding in western Europe, and heatwaves in Canada and the US.

• Media reports state that the incoming Typhoon In-Fa carrying atmospheric water is causing heavy rainfall. The air currents of the typhoon are getting concentrated over Zhengzhou city which is surrounded by the Funiu and Taihang mountains.

• Zhengzhou city is situated on the banks of the Yellow River which is the second-longest river in China and extremely prone to flooding. China witnessed the devastating Yellow River flood in 1887.

• Climate change is causing extreme weather conditions leading to disasters all over the world.

• Canada and the US were recently hit by severe heat waves. Germany also witnessed severe floods that killed 196 people. India also witnessed two cyclones back-to-back on its west and east coast, while the northern part of the country experienced severe heatwaves.